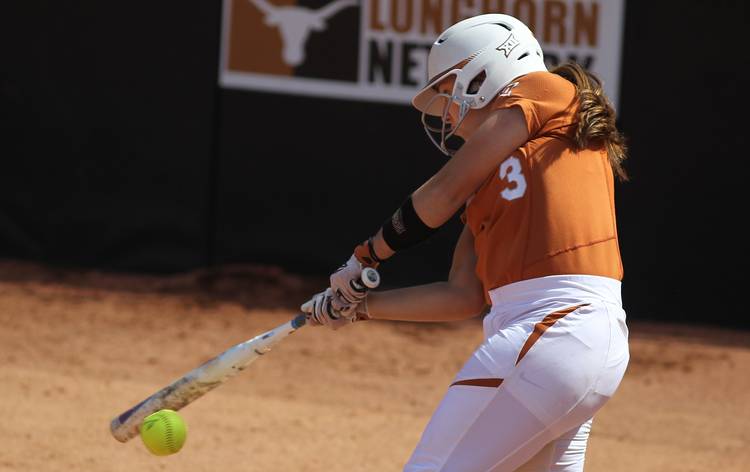 Texas' Kaitlyn Slack (3) hits a single to drive in a run against Houston during a NCAA softball game at McCombs Field, Sunday, April. 2, 2017. (Stephen Spillman / for AMERICAN-STATESMAN)

Paige von Sprecken allowed just three hits and struck out seven for the Longhorns softball team on the way to a 3-0 win over the No. 25 Texas State Bobcats at McCombs Field on Wednesday night.

The senior pitcher for Texas gave up five walks but still managed to pick up the complete-game shutout. She didn’t need much run support to get her fifth win of the season.

In fact, von Sprecken (5-5) even provided the winning run in the third inning. Von Sprecken’s two-out single scored Ki’Audra Hayter to make it 1-0. Hayter reached base on one of Texas State’s three errors.

“I think tonight was big for us,” UT head coach Connie Clark said. “It’s big for our confidence heading into Big 12 Conference play this weekend. I thought we played solidly all the way around tonight.”

The Longhorns (13-13) struck again with two outs an inning later. Kaitlyn Washington reached base on an error before Mallory Schattle walked. With two runners aboard, Kaitlyn Slack doubled to score two runs and make it 3-0. Slack went 1-for-2 but made her only hit count.

Janae Jefferson and Beckah Alcozer each had a hit for Texas as well.

The Longhorns managed five hits against Randi Rupp (14-6), the nation’s strikeouts leader. Coming off a perfect game Sunday, Rupp allowed three runs, all unearned, on five hits in six innings. She struck out five and walked one.