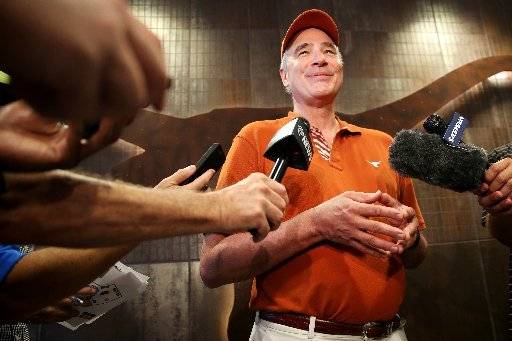 Earlier this week, Texas athletics director Steve Patterson was ousted after just 22 months on the job. University of Texas president Gregory L. Fenves stated on Tuesday: “I felt that the risks of not accepting his resignation at this time and try to have him stay outweighed the benefits.”

Patterson’s short tenure was one of constant change. He hired both the football and men’s basketball coaches, raised ticket prices for both sports, and multiple officials left the athletics department. He also ired the Longhorn faithful fan base.

According to the Statesman’s Kirk Bohls, Patterson wore out his welcome. Bohls characterizing Patterson’s tenure:

“While Patterson should be applauded for hiring the first two African-American men’s coaches in school history in Charlie Strong and Shaka Smart — two solid and maybe even spectacular hires — he just went out of his way to alienate everyone he came into contact with. He ticked off everyone by raising ticket prices, disallowing the resale of unwanted tickets, pushing basketball and football games in China, Mexico City and perhaps Saudi Arabia, all but dissolving the sports information department and nickel-and-diming too many.”

The Austin American-Statesman’s editorial board shares their opinion on why the Patterson ouster was good thing – His failings threatened UT’s primary mission.

“Rather, Patterson’s controversial financial moves and growing public-perception problems not only undermined the efforts of the $173 million UT athletics program; they threatened to derail the academic agenda of Fenves’ nascent administration. Fenves had no choice but to show Patterson the exit and do it quickly.”