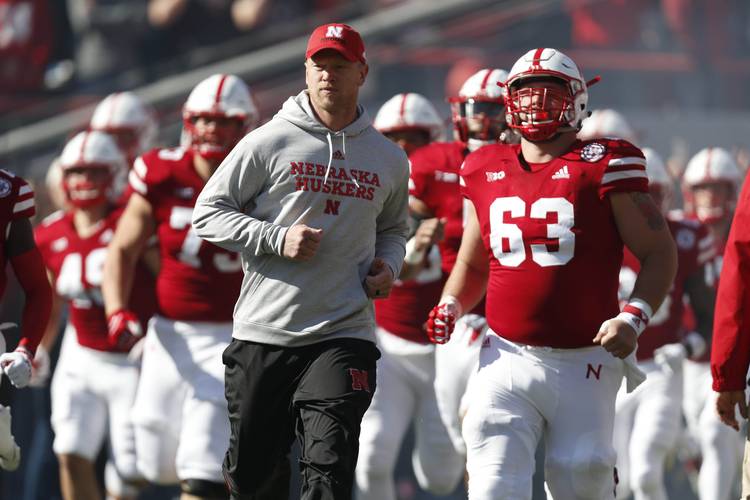 Nebraska Cornhuskers head coach Scott Frost leads his team onto the field prior to the game against the Minnesota Golden Gophers at Memorial Stadium in Lincoln, Neb. on Oct 20, 2018. (Bruce Thorson/USA Today)

We’re 56 days away from the 2019 season opener, but it’s never too early to talk college football. We kick off our 11th annual countdown series of our preseason Top 25 as selected by the American-Statesman sports staff. Last year’s eventual CFP semifinalists ranked 1st, 2nd, 8th and 13th in our 2018 poll.

The Huskers’ best-case scenario: The Cornhuskers, still throbbing over back-to-back, four-win seasons for the first time since 1959-60, kick off the fall with serious momentum from their 4-2 finish and ride the coattails of emerging sophomore quarterback Adrian Martinez and a stout defensive line for Scott Frost’s first winning season. A favorable schedule and a starving fan base support a program on the rise as Nebraska announces itself as a threat in the Big Ten West and wins eight or nine games. The West could be prime for the taking since no team lost fewer than Iowa’s four games last year.

And their worst-case scenario: Worst case? An injury to Martinez, a freshman All-American who was a counselor at the Manning Passing Academy this summer, and a defense hurting for linebackers that may not have improved that much from the nation’s 88th worst scoring unit and 96th most anemic run defense could combine to derail Frost’s hopes to re-energize one of the nation’s foremost powerhouses and slow the progress in his second season. Nebraska hasn’t had three straight losing seasons since six in row from 1956-61.

Last year, Nebraska didn’t crack our preseason poll. The Huskers haven’t started a season ranked in the AP’s Top 25 since 2014.

Spring cleaning: Maurice Washington, the leading returning running back with 455 yards, still faces a felony charge of possession of child pornography and will have a plea hearing in Santa Clara County later this month. … Among the newcomers are grad transfer receiver Kanawai Noa, who had 96 receptions for 1,257 yards at Cal. Nebraska also got another Cal infusion in new defensive line coach Tony Tuioti, who came on board in February to take the place of NFL-bound Mike Dawson. He’ll be coaching defensive lineman Darrion Daniels, a grad transfer from Oklahoma State. … Will Honas, signed out of junior college and coming back from knee surgery, will compete for a starting linebacker spot. Look for four-star Omaha recruit Nick Henrich to press for playing time as a freshman. … Frost said he was “more pleased with the defense than I thought we would be, but the defense is always ahead in the spring.”

Mills joins the fold: Running back Dedrick Mills, who led Georgia Tech as the ACC rookie of the year with 771 yards and 12 touchdowns two years ago and scored 19 touchdowns with 1,358 yards at a junior college last season after sitting out the previous season with an injury, could be the Cornhuskers’ recruiting prize. The 5-11, 215-pound back has a good blend of power and size but didn’t get to campus until after spring. He’s hoping to bolster a very thin position, but he was actually kicked off the Georgia Tech team for multiple incidents.

Lake Travis to Lincoln: Nebraska is counting heavily on a strong offensive line paced by tackle Matt Farniok and Lake Travis product Brenden James, a junior who has started 20 consecutive games after starting the final nine of his freshman season at right tackle. James, who played on a Cavaliers state championship team, moved to left tackle and helped key an offense that produced four 100-yard rushing games and three 100-yard receiving games as well as the first 1,000-yard receiver in school history, and Martinez ran for 629 yards and eight touchdowns.

Big Ten issues: The school’s overall athletic program finished a lowly 48th in the Learfield Directors’ Cup standings, ahead of only Purdue and Rutgers in the Big Ten. Nebraska hasn’t finished in the top 25 of those standings since 2014, and athletic director Bill Moos has made eight coaching changes in his 20 months on the job. The Big Ten went to a nine-game league schedule in 2016 but has missed the CFP the last two years. Of the 42 non-conference games this fall, only 10 will be against Power 5 opponents.

The key game? Sept. 28, Ohio State. The Cornhuskers may be able to take advantage of an inexperienced, new Buckeyes head coach in Ryan Day. If Nebraska can start out 2-0 in league play and navigate a friendly schedule that does not include Michigan, Michigan State or Penn State, Frost’s club could be off and running.

This school’s mascot is named Otto.