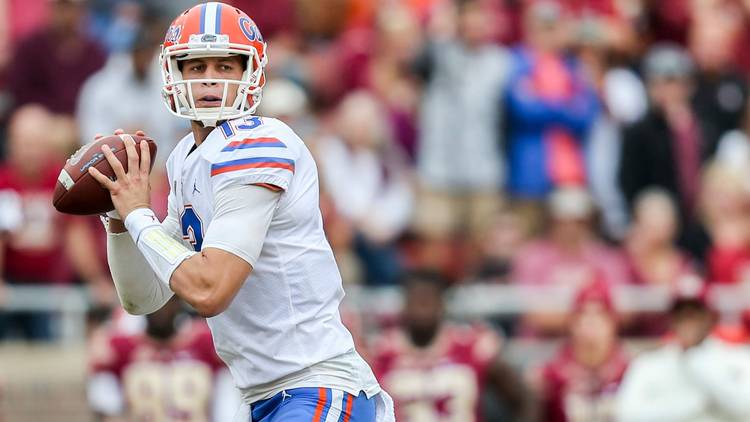 We’re 42 days away from the 2019 season opener, but it’s never too early to talk college football. We continue with our 11th annual countdown series of our preseason Top 25 as selected by the American-Statesman sports staff. Last year’s eventual CFP semifinalists ranked first, second, eighth and 13th in our 2018 poll.

The Gators’ best-case scenario: Feleipe Franks takes another large step toward superstardom. The 6-6, 240-pound quarterback hasn’t shied away from the expectations that come with being the face of the program, going as far to say at Monday’s SEC media days that he wanted to be the fourth statue on Gale Lemerand Dr. near The Swamp in Gainesville, joining Heisman Trophy winners Steve Spurrier, Danny Wuerffel and Tim Tebow. Franks threw 24 touchdowns and only six interceptions last season after throwing nine touchdowns and eight picks as a freshman. Of note, Franks was interception-free in his last five games.

And their worst-case scenario: Worst case? Franks becomes a sitting duck behind an offensive line that lost four starters. Stone Forsythe, Jean Delance and Richard Gouraige are names that have to step up in place of veterans Martez Ivey, Tyler Jordan, Fred Johnson and early draft entry Jawaan Taylor. They combined for 141 career starts.

Spring cleaning: Nine players have entered the transfer portal and two blue-chip recruits — linebacker Diwun Black and offensive lineman Deyavie Hammond — never even made it to campus because they didn’t qualify academically. The Gators are hovering somewhere around 75 active players. … Line coach Sal Sunseri bolted for Alabama and cornerbacks coach Charlton Warren was hired at Georgia.

Back in chomp mode: Mullen, then at Mississippi State, was being strongly considered for the Tennessee job after Butch Jones was fired near the end of the 2017 regular season. But Florida athletic director Scott Stricklin — Mullen’s former boss at Mississippi State — instead lured him to Gainesville. Mullen arrived with a promise to bring the program back to special places; he was Urban Meyer’s offensive coordinator on powerhouse Florida teams from 2005-08 that won a pair of national championships. The 10-3 season (a six-win improvement from 2017) and a blowout of Michigan in the Peach Bowl has Florida back in the SEC mix.

Had to keep him: Mullen gave defensive coordinator Todd Grantham a $300,000 raise to keep him in Gainesville a while longer. Grantham has drawn the interest of several NFL teams, including the Cincinnati Bengals. With seven starters returning, Grantham’s players spoke of his famously aggressive play-calling to reach another level this fall. “Definitely aggressive,” defensive end Jabari Zuniga said at SEC media days. “(Grantham) emphasizes pressure on the quarterback. Y’all are going to see, there were a lot of play calls that coach Grantham didn’t call that he’s going to call this year.”

Needing a WR to emerge: In a program that has thrilled its fan base with stud wide receivers, the Gators are looking for a top receiver threat to show himself. Van Jefferson came on in the second half of last season, coinciding with Franks’ improvement. But there weren’t as many chunk plays; only two of the team’s 486 receptions went for more than 50 yards. Look for 6-5, 210-pound former Ohio State player Trevon Grimes to get more deep looks on the outside.

The key game? Aug. 24, Miami. Sure, the Gators play in the most physical conference in college football, but the season opener against the Hurricanes will set the tone for the rest of the season.

This school finished in the top 10 for the first time in a long time — since the 2009 season.