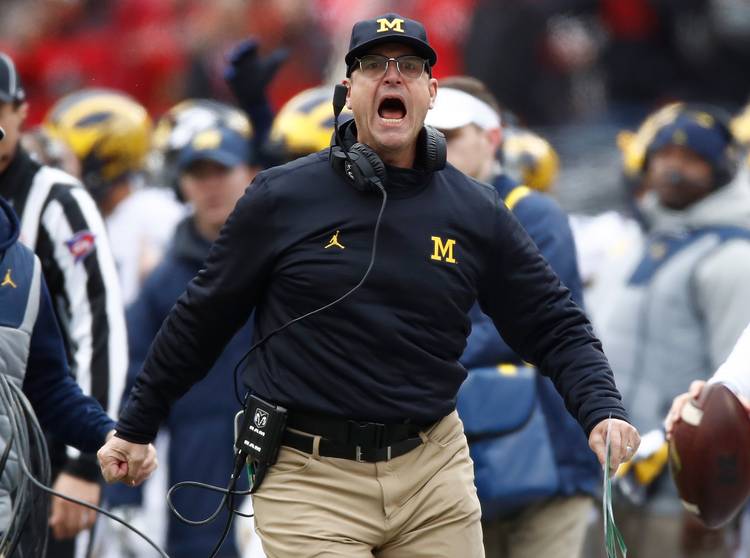 Michigan coach Jim Harbaugh has yet to win a Big Ten title with the Wolverines and has struggled against arch-rival Ohio State. (Gregory Shamus/Getty Images)

We’re 43 days away from the 2019 season opener, but it’s never too early to talk college football. We continue with our 11th annual countdown series of our preseason Top 25 as selected by the American-Statesman sports staff. Last year’s eventual CFP semifinalists ranked first, second, eighth and 13th in our 2018 poll.

The Wolverines’ best-case scenario: Quarterback Shea Patterson blossoms in new offensive coordinator Josh Gattis’ spread scheme, which opens the door for Michigan to beat Ohio State and win a Big Ten title for the first time in the Jim Harbaugh era. The Big Ten is winnable with a coaching change at Ohio State and a new quarterback at Penn State. Defensive coordinator Don Brown and his defense provide Michigan a chance once it reaches the College Football Playoff.

And their worst-case scenario: Worst case? The Wolverines don’t adjust well to a new offensive philosophy and let Ohio State continue their domination in this rivalry, which leads to more recruiting victories and a bigger talent gap for the Buckeyes. A lackluster season could spell real trouble for Harbaugh. The Wolverines continue to play second fiddle to their bitter rivals in Columbus despite the absence of Urban Meyer. Continued offensive woes send Harbaugh back to the NFL and Michigan back to the drawing board.

Last year, Michigan was 12th in our preseason poll.

Spring cleaning: Harbaugh showed a lack of awareness when he abandoned his fight against spread offenses and hired Gattis to implement a modern style in Ann Arbor. It remains to be seen how much Harbaugh will trust his new hire when times get tight. Will Harbaugh allow his offense early growing pains for future success, or will he take control and revert back to his comfort zone of power offense in big games?

Special teams: P Will Hart (punter of the year)

An exciting offense?: It was the right year for Harbaugh to torch his pride and see if a spread offense can help Michigan reach championship heights. Patterson is a mobile quarterback who should thrive with more freedom. Wide receivers Donovan Peoples-Jones, Tarik Black and Nico Collins are real weapons. The running game is a concern, but the spread with a successful passing game should help Michigan find success on the ground.

Don Brown is back: The number of returning starters on defense matters less than the return of its defensive coordinator. Brown is a true maestro of defensive success and all he needs is for the offense to hold its end of the bargain for the Wolverines to compete for a conference championship and a berth into the playoff. The secondary is stout.

If not now, when?: Michigan is one of those programs judged on championships. Harbaugh has yet to deliver anything remotely close to the expected success fans placed upon him when hired. It’s now or never for him; the Big Ten is ripe for the picking. Ryan Day is now the head coach at Ohio State. Trace McSorley is no longer the quarterback at Penn State. If the Wolverines can’t win the division in 2019, will Harbaugh be back in 2020?

The key game? Nov. 30, Ohio State. It’s hard to justify a $7.5 million salary while going 0-5 against the program you were hired to beat. Harbaugh risks moving to 0-6 against Ohio State if the Wolverines can’t stop the streak this season. The timing couldn’t be better with a home game against a Buckeyes team breaking in a new head coach and a new quarterback.

This SEC school began last season unranked but finished in the top 10 for the first time since 2012.