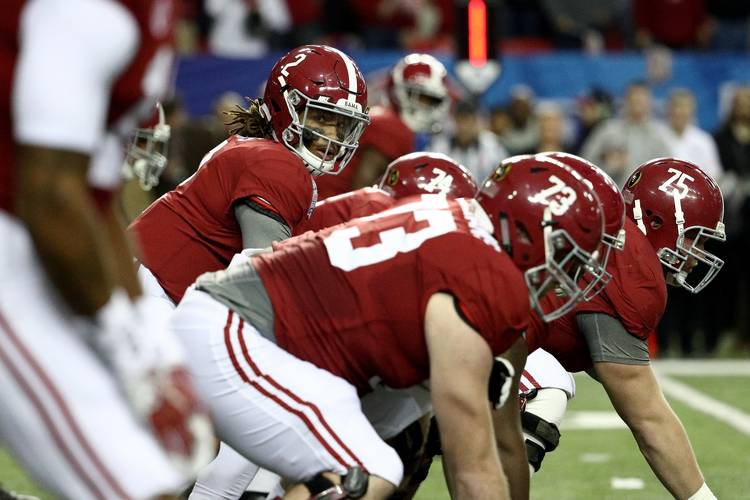 Jalen Hurts #2 of the Alabama Crimson Tide snaps the ball during the 2016 Chick-fil-A Peach Bowl at the Georgia Dome on December 31, 2016 in Atlanta, Georgia. (Photo by Maddie Meyer/Getty Images)

We’re 36 days away from the 2019 season opener, but it’s never too early to talk college football. We continue with our 11th annual countdown series of our preseason Top 25 as selected by the American-Statesman sports staff. Last year’s eventual CFP semifinalists ranked first, second, eighth and 13th in our 2018 poll.

Our No. 4 team: Oklahoma

The Sooners’ best-case scenario:  Not many schools can crow about getting a Heisman-caliber quarterback as a transfer after watching two previous quarterbacks win the award. But here comes Jalen Hurts, the transfer from Alabama. All he really needs to do is distribute the ball to stars CeeDee Lamb, Trey Sermon and Grant Calcaterra. Head coach Lincoln Riley is 24-4 in two seasons with two Big 12 titles. OU should be a title contender once again.

And their worst-case scenario: Worst case? OU won the league last year with an atrocious defense. The Sooners allowed a league-high 33.3 points per game. “We definitely expect our defense to be better. I don’t think there is any doubt,” Riley said at Big 12 media days. Even if Hurts gets injured, the Sooners have enough firepower to keep going. Two losses would leave OU fans shocked.

Last year, Oklahoma was No. 8 on our preseason poll.

Spring cleaning: Perhaps the biggest news came at media days when Riley confirmed that RB Kennedy Brooks had been reinstated to the team after a Title IX investigation on campus. He rushed for more than 1,000 yards and scored 12 touchdowns last season. OU also hired a new defensive coordinator; Alex Grinch spent last season at Ohio State. Stabilizing the defense is a key issue. Until last season, OU hadn’t allowed more than 30 points per game this decade.

Bullies of the Big 12: This season marks OU’s 125th year of football. It’s been a tremendous run lately, as OU has won four straight Big 12 titles. The Sooners have won more Big 12 titles over the last 20 years (12) than they have lost home games (10), a run of excellence that’s unmatched in the Big 12. Texas, by contrast, has won only three Big 12 titles since the conference began in 1996.

Friendly skies: The way to crush OU’s defense last year was through the air. Texas had 501 passing yards. Oklahoma State piled up 640 and West Virginia had a whopping 704 yards in a game that was the height of Big 12 offensive insanity. Cornerbacks Tre Brown and Tre Norwood return along with safety Delarrin Turner-Yell. OU’s pass defense, which ranked last in the Big 12, has nowhere to go but up.

High expectations: This season is all about managing expectations. The schedule looks easy. OU plays South Dakota, the school’s first FCS opponent since 2012. Then comes the road trip to UCLA — OU has won 20 straight true road games. The Sooners are likely to be favored in all 12 regular-season games, including their matchup with Texas. So can Hurts push OU through the regular season and back to the CFP?

The key game? Oct. 12, Texas (Cotton Bowl). Oklahoma travels to face UCLA on Sept. 14, but it doesn’t look like the Sooners will get tested until facing the Longhorns in the Cotton Bowl. That game will determine the season’s second-half storylines. The last five regular-season matchups have been decided by seven points or less.

This school lost three games last year. One of them was to Texas.