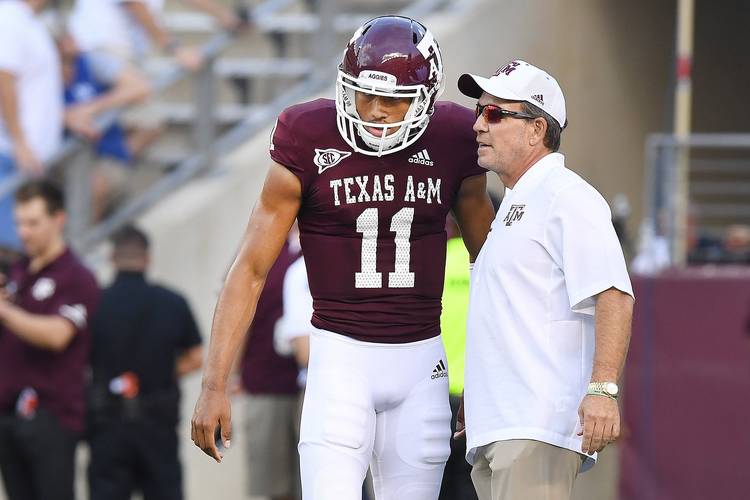 We’re 44 days away from the 2019 season opener, but it’s never too early to talk college football. We continue with our 11th annual countdown series of our preseason Top 25 as selected by the American-Statesman sports staff. Last year’s eventual CFP semifinalists ranked first, second, eighth and 13th in our 2018 poll.

The Aggies’ best-case scenario: A&M’s scary schedule is front-loaded, with a road game at defending national champion Clemson on the season’s second week. It’s got meat in the middle with a home game against Alabama. Then the Aggies finish the regular season with road games against Georgia and LSU. Maybe the most realistic, best-case scenario is A&M pulling off an upset of Clemson or Alabama or the Bulldogs and Tigers.

And their worst-case scenario: Worst case? If A&M is forced to rely on quarterback Kellen Mond to make spectacular plays to win games, the Aggies might be in trouble. It’s a must for the Aggies to replace the production of departed tailback Trayveon Williams.

Spring cleaning: Fisher needed to hire an offensive line and tight ends coach after the departures of Jim Turner and Tim Brewster. Joe Jon Finley, a former Oklahoma player, coached tight ends at Missouri the past three seasons. Josh Henson is in charge of the offensive line. He spent the last three seasons on staff at Oklahoma State, his second stop with the Cowboys. He’s also worked at Missouri and LSU. … The Aggies had a school-record seven players selected in April’s NFL draft. The Aggies’ 74-72 seven-overtime win over LSU to cap the regular season was nominated for an ESPY as one of the top games in any sport. It lost to the Los Angeles Rams’ win over the Kansas City Chiefs. A&M’s win over LSU was its first victory over the Tigers since the Aggies joined the SEC for the 2012 season.

Heading into Year 3: Mond, a junior, is headed into his third year as a starter, but this is the first time in his career that he hasn’t faced competition for the top of the depth chart. He blossomed under the tutelage of Fisher and had a nice season a year ago, ranking fourth in the SEC in total offense, fifth in touchdowns and sixth in passing yardage. But he also had the SEC’s top tailback (Williams) and tight end (Jace Sternberger) to help him manage the game. He was instrumental in A&M’s win over LSU, coming to life in the final minutes and the seven overtimes. But in A&M’s bowl mauling of North Carolina State, Williams was the star.

Mann’s the man: Want to know who might be the most important, yet overlooked, player on the roster? He’s punter Braden Mann, who was able to flip field position with his long, high-hanging punts. He was perfect for SEC play. Mann won the Ray Guy Award as the nation’s top punter and was a unanimous All-American. He had 14 punts of at least 60 yards, an NCAA record, and averaged 51.1 yards per game. The defense did well against the run, ranking second in the SEC with an average of allowing only 95 yards a game. Although he didn’t make a tackle, Mann’s punts had a lot to do with the improvement.

Replacing Williams: The obvious question is who will replace Williams. Jashaun Corbin, whose best play a year ago was a 100-yard kick return for a touchdown, is first choice. He made the all-freshman, All-SEC team a year ago. The speedster gained 319 yards on 57 carries. His best SEC game was a 56-yard performance against Auburn. Fisher knows Corbin is quick, but can he withstand a full SEC season? Jacob Kibodi also will be in the mix for playing time. Vernon Jackson, a one-time commitment to Alabama, injured his neck in the spring. Although Fisher said he’s healing, it’s unclear when he’ll be able to play. Cordarrian Richardson, a 246-pound bruiser, also is eligible to play after sitting out last season. He’s a transfer from Central Florida.

The key game? Sept. 7, at Clemson. Last year’s narrow loss to the Tigers at home was a tone setter for the season. Sure, it was a loss, but the Aggies weren’t supposed to be that competitive. Play Clemson pretty evenly, possibly winning the game, and A&M’s fortunes could switch immediately.

It’s a Big Ten school that has lost to Ohio State in 14 of the last 15 years, including seven straight matchups.