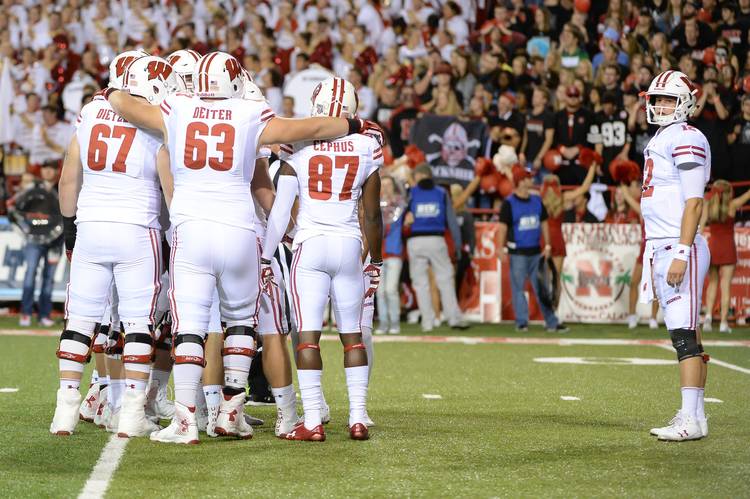 Quarterback Alex Hornibrook (12), after starting 32 games for Wisconsin, has moved on to Florida State as a graduate transfer. That means the Badgers' offense will be led by either Jack Coan and Graham Mertz. (Steven Branscombe/Getty Images)

We’re 52 days away from the 2019 season opener, but it’s never too early to talk college football. We kick off our 11th annual countdown series of our preseason Top 25 as selected by the American-Statesman sports staff. Last year’s eventual CFP semifinalists ranked 1st, 2nd, 8th and 13th in our 2018 poll.

The Badgers’ best-case scenario: Wisconsin needs running back Jonathan Taylor to remain in the Heisman Trophy discussion, but it would be beneficial if receivers Danny Davis III and A.J. Taylor step up and also snag some highlights. Wisconsin went from fourth place in last year’s AP preseason poll to receiving a total of two points in the final rankings, so maybe the Badgers will be better suited as the hunters instead of the hunted.

And their worst-case scenario: Worst case? If last season’s turnover problems — the Badgers’ 24 giveaways ranked 107th nationally — turn out to be a trend instead of an anomaly, then Wisconsin could be in for a bigger disappointment this season. A turnover turnaround could depend on whoever replaces Alex Hornibrook at quarterback, but are junior Jack Coan and Graham Mertz ready for the spotlight?

Last year, Wisconsin ranked 6th in our preseason poll. Before last season, the last time the Badgers finished unranked was at the end of the 2012 season.

2018: 8-5, 5-4 in the Big Ten (beat Miami in the Pinstripe Bowl). Wisconsin has finished first or second in the Big Ten West in each of Chryst’s four seasons.

Spring cleaning: Wisconsin had four players drafted, but OL David Edwards was the only early departee. … The 2019 recruiting class ranked 28th nationally, with five-star OL Logan Brown was the big get. Quarterback Graham Mertz and OL Joe Tippmann were the only other four-star signees. … A coaching staff that includes five coaches who went to school at Wisconsin remained intact over the offseason. … Last year, Wisconsin failed to win three straight games for the first time since 2001. … The 4,171 rushing yards compiled over Taylor’s freshman and sophomore years is a FBS-level record.

Taylor’s throne: After running for an NCAA-best 2,194 yards, Taylor beat out Clemson’s Travis Etienne and Memphis’ Darrell Henderson for the 2018 Doak Walker Award. Since that award was first handed out in 1990, only Texas’ Ricky Williams and Arkansas’ Darren McFadden have won it in back-to-back years. Only six of the 29 winners came back to college, and three of the previous five returnees ran for more yards the following year.

Big shoes to fill: Taylor shined as a sophomore, but he wasn’t the only reason why Wisconsin’s 273.4 rushing yards per game were bested by only five other schools. The Badgers boasted one of the nation’s top offensive lines, but four of those starters have moved on from Madison. The line did retain some talent — junior Tyler Biadasz was an all-conference center and tackle Cole Van Lanen was a top reserve.

Home, sweet home: In the six weeks following its season opener at South Florida, Wisconsin has five home games and a bye on the schedule. Camp Randall Stadium was built in 1917 and Wisconsin claims it is currently the country’s fourth-oldest venue. All-time, the Badgers are 361-196-23 at Camp Randall and the team last failed to post a winning record in its home schedule in 2002.

The key game? Sept. 28 vs. Northwestern. Whoever put together the schedule didn’t do Wisconsin any favors since Michigan, Ohio State and Michigan State are its three draws from the Big Ten’s East division. Wisconsin, though, needs to focus more on its standing in a West division that Northwestern won in 2018. Since 2000, Wisconsin is 6-7 against Northwestern, including a 31-17 road loss to the Wildcats.

This school — the first SEC team on our poll — opens its season with a game in the state of Texas.