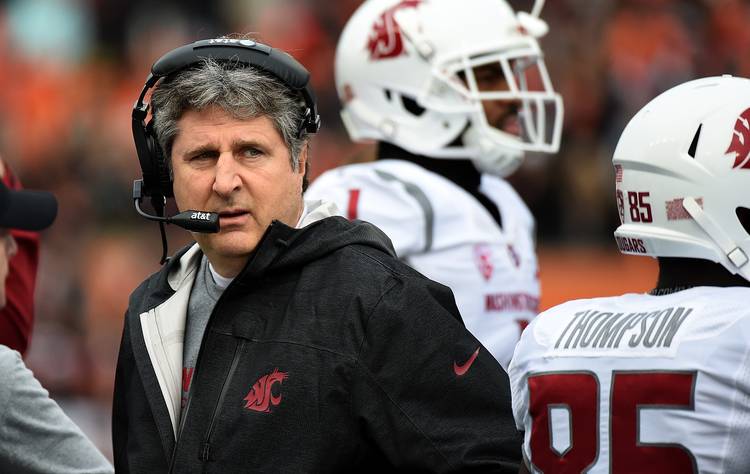 We’re 53 days away from the 2019 season opener, but it’s never too early to talk college football. We kick off our 11th annual countdown series of our preseason Top 25 as selected by the American-Statesman sports staff. Last year’s eventual CFP semifinalists ranked 1st, 2nd, 8th and 13th in our 2018 poll.

Our No. 21 team: Washington State

The Cougars’ best-case scenario: Eastern Washington grad transfer Gage Gubrud stays healthy, continues a tradition of stellar quarterback play under head coach Mike Leach and leads the Cougars to a Pac-12 title and into contention for a spot in the College Football Playoff.

And their worst-case scenario: Worst case? Neither Gubrud nor senior Anthony Gordon emerge as the unquestioned starter at quarterback, the Cougars lose for the seventh consecutive time to cross-state rival Washington, and Leach and his team once again play in a pre-New Year’s bowl game.

Spring cleaning: The quarterback always tallies plenty of attention as well as statistics in Leach’s Air Raid offense, and Gubrud looks like the next in line. The 6-2, 210-pounder played in 32 games and threw for almost 10,000 yards at Eastern Washington but has battled injuries. … With Gubrud missing the spring game because of an ankle injury, Gordon made his case to be Wazzu’s next quarterback by completing 21 of 30 passes for 234 yards and three touchdowns with one interception. … A strong defensive line that helped the Cougars lead the Pac-12 with 38 sacks last season could be even stronger with the eligibility of Lamonte McDougle, an impressive interior lineman who transferred from West Virginia and sat out last season.

Hippo giving the boot: Oscar Draguicevich III, a Hutto graduate, has become one of the best punters in the nation after transferring to Washington State from Incarnate Word in San Antonio. He finished second in the Pac-12 with a 45.7 yards-per-punt average, which set a single-season school record and tied for seventh in the country. Draguicevich, all-district punter and placekicker at Hutto who also excelled in soccer, comes from an athletic background. His father, Oscar Draguicevich, was a professional soccer player for 10 years, including three seasons in the MLS for the San Jose Clash.

Lubbock in recruiting rear-view: For a coach who spent a decade leading the Texas Tech program, Leach has all but abandoned the fertile recruiting grounds of the Lone Star State. Aside from Draguicevich, the only Texans on the roster are freshman defensive back Gatlin Grisso (Aubrey), redshirt sophomore punter Blake Mazza (Plano), redshirt freshman receiver Cassidy Woods (Greenhill School in Addison) and freshman defensive lineman Rudder Romo, a Houston native who played prep football at IMG Academy in Florida. None of those players are expected to get significant playing time this season.

Getting defensive: Leach hired former Minnesota head coach Tracy Claeys as the Cougars’ defensive coordinator prior to last season, and the move paid immediate dividends. For the fourth straight year, Wazzu trimmed its opponents’ scoring average and improved in almost every other major category. Leach’s Texas Tech teams rarely made headlines with their defenses, but the Cougars ranked fifth in the Pac-12 last season in points allowed (23.3) and fourth in yards allowed (359.5).

The key game? Sept. 28, at Utah. Yes, Wazzu fans always circle the date of the annual grudge match with Washington. But this early-season meeting between two teams that should both be unbeaten and ranked in the top 20 will set the tone for the Pac-12 race.