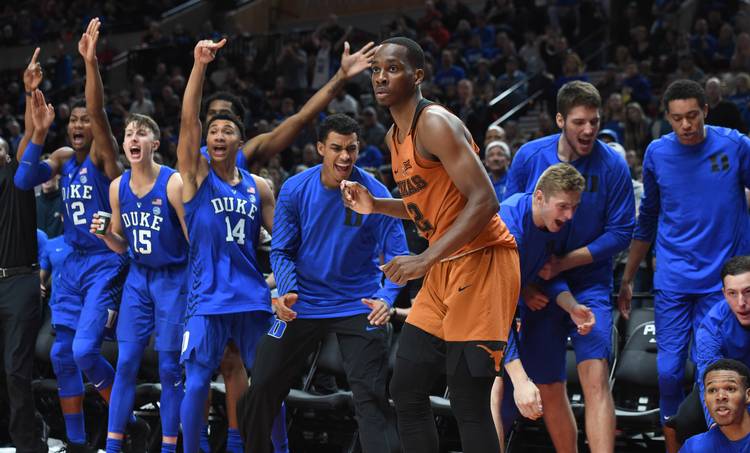 The Duke Blue Devils bench reacts to a call on Matt Coleman during a 2017 contest with Duke. The Longhorns could face Duke Friday. [Steve Dykes/Getty Images]

Seven of the 10 teams are still undefeated.

No team has taken a second loss.

Baylor sophomore Jared Butler leads the league in scoring with 21 points per game.

The biggest thing that happened in the Big 12 this last week after signing day? Honestly, it was the end of the Kansas-Monmouth game when this happened:

Here's how to not act when losing 110-55. pic.twitter.com/VjWnePrvFO

As for games earlier this week, the season is young and most teams aren’t playing challenging schedules or playing teams they clearly have more talent than. It’s hard to gauge how good these teams are now and you really need to wait till they have played eight or 10 games to get a good feel.

On Monday, the Big 12 went 3-0 with wins by a combined 24 points over Northern Colorado, William & Mary and Air Force. The biggest story of the season through three weeks is Kentucky losing at home to Evansville, so the fact these teams won is a good thing, but it’s probably not great that Oklahoma trailed by two at halftime and allowed 39 points to William & Mary, especially since Oklahoma has been pretty impressive this season.

Kansas played East Tennessee State, a team picked to win the Southern Conference, saw their 18-point lead dwindle to five before pulling ahead and winning by 12.

Let’s set the scene: Here are the tournaments, invitationals and “classics” Big 12 teams are playing this coming week.

*Thursday game being played in Lubbock

** Thursday game being played in Norman

Ranking the best games you definitely will or could see between now and Thanksgiving.

TCU will get its first test of the season against Clemson and then its follow up game against Colorado or Wyoming will also be tough. It’s hard to look past that Clemson game and come away thinking about the next game. It’s not a gimmie and Clemson is 3-1 with the loss coming to open the season in ACC play to Virginia Tech.

Spoiler to the next game, but I don’t think Iowa State will beat Michigan in its first game in the Bahamas, so a likely matchup with North Carolina won’t happen on Nov. 28 and probably would only come in the losers bracket on Nov. 29. But somewhere along the way Iowa State is likely to play a Power 5 school, a top-10 Gonzaga or a ranked Seton Hall squad.

Speaking of, Iowa State’s best chance to win in the Battle 4 Atlantis, and probably the only game against a school that’s not Southern Miss and where the Cyclones will be favored, is against Michigan. The Wolverines have a new coach, Juwan Howard, but are 3-0 start to the season with a win over Creighton.

This could be a toss up game for both squads, and Iowa State does have the best player on the floor in Tyrese Haliburton, but ISU also has a lot to work out.

Another Power 5 matchup for the Sooners who have already played and beaten Minnesota and Oregon State away from Norman. It’s Stanford coach, and Kansas alum, Jerod Haase’s fourth season in Palo Alto and he entered the year 21-29 overall as Stanford coach.

To say it’s an important year for Haase is an understatement. I doubt he survives at Stanford this season without a winning year — he’s already had two losing campaigns. That said, it’s obvious this means more to Stanford than OU, but I think the Sooners pick up a win.

Assuming the Mountaineers get by a good mid-major program in Northern Iowa on Tuesday, that’ll set up a fun championship game in Cancun.

Story time: When I was covering Kent State in 2008 in the NCAA Tournament, Frank Martin was in his first season at Kansas State with star freshman Michael Beasley scoring buckets. During Martin’s press conference following a first round win, it felt like Martin dropped West Virginia coach Bob Huggins’ name a dozen times (he probably didn’t, but that’s how I remember it). He lobbed phrases like “ I worked for a guy who …” and then he praised Huggins.

The point is: Martin and Huggins are buds and Martin owes Huggins a lot and Martin coaches and acts on the sideline a lot like Cincinnati Style Huggins acted. Don’t get me wrong, Huggins still has moments where he turns the clock back to 1999 on the sidelines, but he’s definitely mellowed. West Virginia will probably handle South Carolina, who lost to Boston University this week.

Even if it’s not WVU-South Carolina, we could, and should, get Huggins vs. Gregg Marshall in possible game with Wichita State.

This is the best game Texas Tech has on its November schedule and it’s against a Big Ten team that lost by 15 at home to DePaul. I’m not sure how much better the Las Vegas Invitational championship game will be as Creighton lost to Michigan and San Diego State is an unranked mid-major.

Villanova was blown away by Ohio State earlier this month so perhaps the Wildcats aren’t as good this season as some thought. But a future Hall of Fame basketball coach is still on the sideline for Nova. This game won’t happen if the Wildcats can’t beat Middle Tennessee State and then either Mississippi State or Tulane AND Baylor can’t beat Ohio University and …

Assuming Baylor beats Ohio University, the Bears get another shot to take down a talented Pac 12 team Utah is a solid team who has a 143-49 win over Mississippi Valley State this year and beat Minnesota by four and Nevada by five this season. The Utes look like a possible Pac-12 contender.

Assuming Texas beats Georgetown, who lost to Penn State last week and assuming Duke beats California, this sets up a true season-perception changing game for Texas. If Texas can win — heck, if Texas can push No. 1 Duke — then hype around this Texas team will be even more ratcheted up by Longhorn fans and it’ll be well-deserved.

Purdue picked up a second loss last week and Texas looked vulnerable at times against California Baptist and Prairie View A&M, so I still think there needs to be some caution around Texas before people start booking NCAA Tournament tickets and Kansas City hotel rooms for Friday and Saturday at the Big 12 Tournament.

But if Texas beats Duke in New York, I predict Texas will be ranked the rest of the season.

Of course this is the top pick and it’ll take a lot to happen, but unlike the other games, it’s more realistic than any future matchup on the list.

Kansas starts out with Chaminade and then plays either UCLA or BYU. I imagine UCLA wins that game and that’ll be the only thing preventing them from making the championship game in Hawaii. With a new coach and a rebuilding program at UCLA, it seems likely KU makes that title game.

As for MSU, it’s much more difficult for the preseason No.1 team. Virginia Tech has already won an ACC road game and Georgia, a possible second round matchup, probably has the best player in the tournament in freshman likely one-and-done Anthony Edwards.

If Michigan State makes it, it’s be the preseason No.1 team vs. preseason No.3 and a Championship Classic grudge match (both these teams, who were favored, lost at Madison Square Garden to open the season).

If MSU falls to Georgia, it’s Kansas vs. a Georgia team with a guard who ESPN’s September mock draft had going No. 2 overall.

No. 3 Baylor finishes off No. 1 Texas in five sets to claim its first win over the Longhorns since 2001