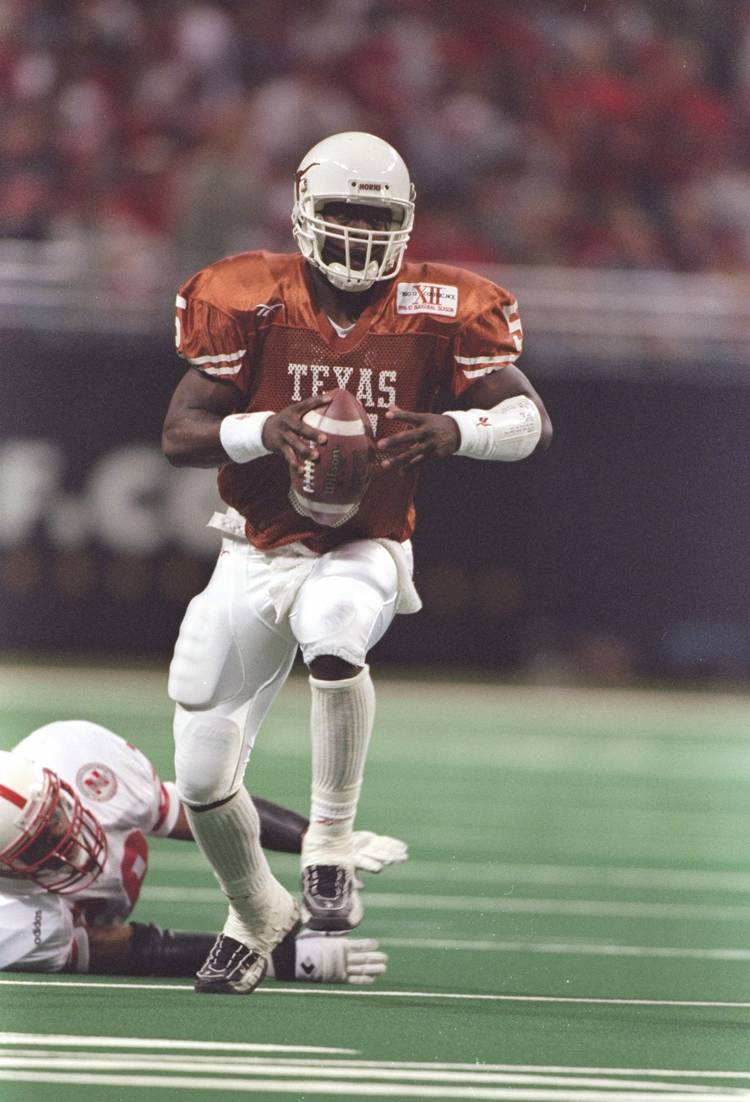 Quarterback James Brown of the Texas Longhorns avoid defensive pressure during a playoff game against the Nebraska Cornhuskers at the TWA Dome in St. Louis, Missouri. Texas won the game 37-27. (Jamie Squire /Allsport)

Roll Left was easy to find on the short list of the Texas Longhorns’ goal-line plays that Coach John Mackovic carried on the sideline of the Big 12 championship game.

Now it also has a place in Texas history.

There is James Street passing to Randy Peschel on fourth and three at the Horns’ 48-yard line to set up a come-from-behind win over Arkansas in the Game of the Century in 1969. There is Street tossing to Cotton Speyrer on fourth and two at the Notre Dame 11 in the Cotton Bowl that season to win the national title.

Now there’s James Brown to tight end Derek Lewis on fourth and inches at the UT 28 for a big gain to ensure the Longhorns’ biggest upset win in at least 31/2 decades.

“If it doesn’t work it’s really a dumb call, ” said Nebraska end Grant Wistrom. “But Coach Mackovic is a genius.”

There are two paddle-wheel steamers moored in the Mississippi not a half mile away from the Trans World Dome, but even the canniest gambler aboard had nothing on Mackovic Saturday afternoon.

Mackovic hasn’t always had luck with fourth-down calls. There was the 1-yard loss on an option to Ricky Williams on fourth and one at the Oklahoma 11 last season when the prudent move might have been to kick what would have been the winning field goal in a 24-24 tie. Trailing 15-9 in the fourth quarter against Texas A&M in 1993, Mackovic removed his top receivers, Mike Adams and Lovell Pinkney, and put in two tight ends on fourth and one from the 2 and threw to tight end Steve Bradley. The ball was intercepted, preserving an A&M win.

This time was golden.

Mackovic said the Horns have run the play no more than two times this season, maybe not at all. But he planned to run it this week in practice, going as far as telling his quarterbacks Friday that that’s the play they’d use.

With Nebraska’s offense moving the ball well in the second half, and with the threat of a big play by an explosive Huskers special team, it was a possibility. A distant possibility.

“If it was a yard, we’d punt, ” Mackovic said. “But it was so close, we thought anyone can make two inches if you’re going for a championship.”

Mackovic called the play on the sideline with no discussion: “The only thing I told (Brown) was to come to run.”

Brown took the snap and faked to Priest Holmes, whose trademark is the high leap over the middle on short yardage. That’s what the Huskers were expecting.

“They call it an Oscar-winning role, ” Holmes said. “I try to put my head down and make it so they don’t see the ball. They have to think I have it.”

Holmes drew his share of Huskers. The rest ran after Brown as he rolled left.

“I had a crease to throw the ball, but I could have run the ball for a first down just as easily, ” Brown said.

“It was me and him, ” said Nebraska safety/linebacker Mike Minter, who was moving in on Brown. “He wasn’t going to make the first down. Then he threw the ball. I looked behind and the guy was wide open. It was a great call by the coach.”

Osborne said he didn’t even think the Horns would snap the ball.

“When they snapped it, I was amazed, ” he said. “When I saw the quarterback run, I was more amazed. When I saw him throw, I was really amazed.”

After his fake, Holmes looked up. He saw Fitzgerald, dragging shallow across the middle. Two Huskers were on him. “I said to myself, `Get it in there!’ Holmes said. “I saw the ball go over his head.”

About that time, so did the Huskers.

Lewis, meanwhile, was wide open. “As soon as I got up to the line of scrimmage I knew my guy was coming up in a blitz. … What did we need? Two inches. I knew I was open at about three (inches).”

Lewis caught the ball and then ran 61 yards to the Huskers 11, hugging the ball with both arms to prevent a fumble.

“I appreciate (the offense) getting to fourth and two (inches) so we could make the call we were dying to make, ” Mackovic quipped. “The rest is history.”