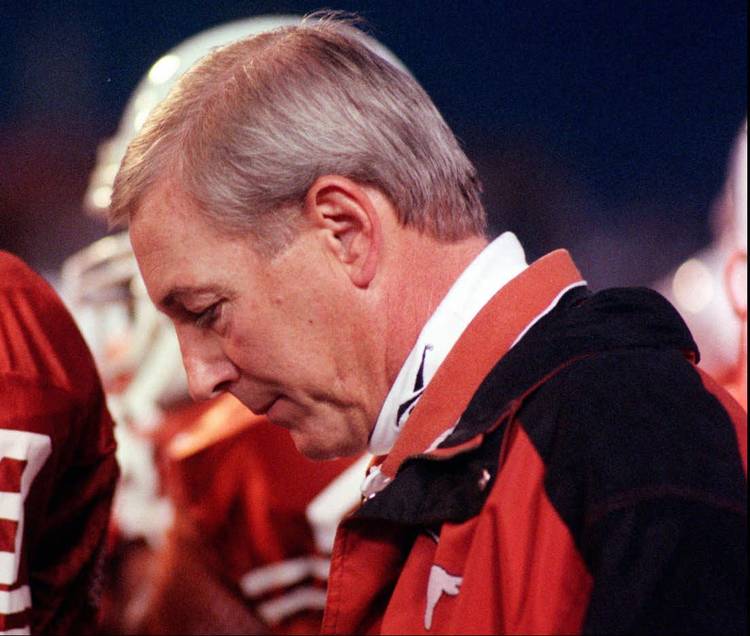 Lynne Dobson/AAS - 11/8/97 - UT coach John Mackovic stands with the team at Memeorial Stadium before the start of their game against Texas Tech.

Conference titles and high graduation rates earn pay bonuses. They do not save jobs.

At least not at the University of Texas.

Coach John Mackovic fell victim to Texas-sized expectations Saturday when he was reassigned after six up-and-down seasons as football coach of the Longhorns, the last of which was a 4-7 year that seriously eroded his support among influential alumni and administrators.

Mackovic, who has three years remaining on a five-year, $3 million deal, will be reassigned to an undetermined midlevel administrative position within the athletic department.

Athletics Director DeLoss Dodds, who announced the move at a late afternoon press conference, would not elaborate about the reasons except to say, “It was time for a new direction for the football program.”

Dodds praised Mackovic, noting the 82 percent graduation rate for players who finished their eligibility and the “exemplary off-field behavior of his players.”

UT also had no trouble with NCAA violations during Mackovic‘s tenure.

“This is a tough decision, as you can imagine, because of the many things Coach Mackovic and his staff accomplished, ” Dodds said.

Dodds said that the search for the coach to take Texas there will begin immediately and that he expects to name a successor in the next two weeks.

“We will go after the best football coach in the country, wherever he is, ” Dodds said. “Somebody who wants to be at Texas.”

Money would not be an object, Dodds indicated. “We’re in the (pay) range where John was. If we get the right person, we can do what we need to get whom we want.”

Northwestern Coach Gary Barnett tops a list of candidates that also includes Butch Davis of Miami, Tommy Tuberville of Mississippi, Bob Simmons of Oklahoma State, Tommy Bowden of Auburn and Mack Brown of North Carolina. Barnett issued a brief statement late Saturday to say he has not been contacted by Texas.

Dodds said he has no clear-cut choice in mind.

A search committee, chaired by Dodds, was being assembled even before the announcement was made. Only athletics council chairperson Waneen Spirduso and former coach Darrell Royal have been confirmed as members. Others being approached are Mike Myers, a Dallas businessman who would represent the Ex-Students Association; former player Bob Moses of the athletics council; an undetermined member of the Longhorn Foundation Advisory Council; former players Doug English of Austin and Alfred Jackson of Houston; and an undetermined at-large member.

The committee will not include any current athletes because of time demands that could cause them to miss class, said Dodds, who added that members might accompany him on trips to interview candidates.

If completed by today, as expected, the committee could meet early Monday, Dodds said.

“Timeliness is important for many reasons, recruiting being one of them, ” Dodds said.

By announcing the reassignment on Saturday, the university has posted official notice of the opening, as required by state law, said Doug Messer, associate athletics director. A coach could not be named earlier than Tuesday because of the three-day posting period. An announcement that soon would be very unlikely.

Time is something Mackovic now has in abundance. The 54-year-old former Wake Forest, Kansas City Chiefs and Illinois coach has $1.8 million remaining on his contract, which runs through January 2001. If Mackovic leaves Texas, the university does not have to pay him. University rules prohibit a contract buyout.

Dodds said he has gone back and forth on what to do since midseason, but the final decision began formulating with the consensus report of the men’s athletics council, which met Tuesday. Texas wrapped up the season with a 27-16 loss at Texas A&M on Friday, and Dodds drove to the home of interim university President Peter Flawn for a 9 a.m. meeting Saturday to discuss Mackovic‘s future. They quickly came to the same conclusion.

“I’ve talked to hundreds of people, and thousands of people have delivered their opinions to me by phone, e-mail and fax, by airplane and other ways, ” Dodds said. “But the only ones I conversed with who had any influence on the decision were the athletics council and President Flawn.”

Dodds then drove to Bellmont Hall, where he met with Mackovic for about 20 minutes shortly after 10:30 a.m. to inform him of the reassignment.

Mackovic told his staff at their regularly scheduled 11:30 a.m. staff meeting. “There wasn’t anything unusual about the meeting — except what was said, ” assistant coach Danny Rocco said. “He was very direct, very to the point.”

Later, Mackovic released a statement through the university that read:

“No one hates losing more than I do. So I certainly understand the frustration this season has caused for every person who loves The University of Texas.

“To all of you, the players, fans, coaches and members of The University Family, please know I am honored to have been your coach in this historic period. Together, we have cheered our three conference championships and bowl appearances, our excellent graduation rates for student athletes, our efforts in the community, and our entrance into a new generation of football in the Big 12.

“On a personal note, I am extremely proud of every student-athlete’s efforts to make this a football program that is a role model for the country. Not only have we accomplished a great deal over the last six years, we have also done it the right way. I am confident that tradition will be a foundation for many generations at The University of Texas.”

Dodds was asked if he’d been able to get much sleep lately. “I get a good four hours sleep every night, ” he said. “… This has not been easy, if that’s what you’re asking.

Dodds said he wouldn’t elaborate on why Mackovic was reassigned.

“I don’t think I want to get into the factors, ” Dodds said. “It could best be categorized as a needed change. We needed a new direction for the football program.”