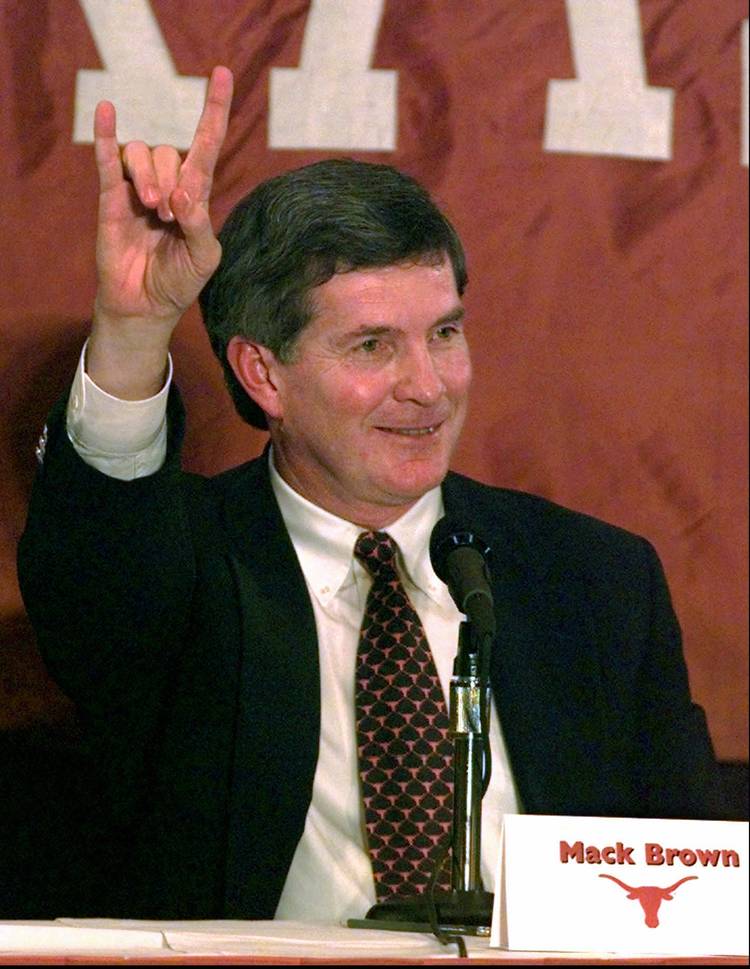 12/5/97 Ralph Barrera/AA-S; University of Texas' new football coach, Mach Brown, gives the Hook 'Em sign at the end of a press conference announcing his hire, in the Burnt Orange Room of the Frank Erwin Center. Brown comes from a successful program at the University of North Carolina. (Wangrin story)

DeLoss Dodds remembers the minute he wanted Mack Brown to become the next Texas Longhorn football coach. It was at 11:30 a.m. Wednesday, when the Texas athletic director walked out of an interview with the North Carolina coach at the Four Seasons Hotel in Atlanta.

He turned to UT Regent Tom Hicks and said, “This is the guy.”

That was the easy part.

Texas offered Brown the job later Wednesday, and — contrary to wire service and television reports — he flew home to Chapel Hill unsure if he would accept Texas’ offer, torn between the potential of Texas and his loyalty to UNC. After a tearful meeting with his players Thursday afternoon — after which, one observer noted, “You could have swum laps in his eyes” — Brown called Texas with his answer.

Dodds remembers that minute, too. It was 3:35 p.m. CST on Thursday, when the University of Texas and the folksy 46-year-old from Cookeville, Tenn., became what Dodds called “the perfect fit.”

“Come to the press conference (today), ” Dodds told a reporter who asked him why it was such a good fit, “and after it’s over, you won’t have to ask me that question.”

“He mesmerized (the screening committee), ” Dodds said. “He had the ability to know people’s names; he looked them in the eye when he talked. His philosophy was very sound when he talked about football, academics, alumni, that we knew he’d worked on for a long time.

“He will absolutely fit well in Austin, Texas. That was some of the decision. … We need to put our different constituencies back together. We need to pull for Texas in good times and bad.”

“The first comment I made when I came was that the day I leave Chapel Hill the program will be in much better shape than it was when I came here, and I think that is true, ” said Brown, who leaves a 10-1 team. “I’ve made the decision to step away and go help somebody get back to this point.”

That somebody is Texas. Dodds said a decision has not beenreached as to whether Brown will stay at UNC through the Tar Heels’ as-yet-undetermined bowl game, but that appears highly unlikely. When Texas hired David McWilliams away from Texas Tech in 1986 and John Mackovic away from Illinois in 1992, both turned the team over to their defensive coordinators for the bowl game.

“It’s important I go to Texas and start building, as soon as I can, ” Brown said.

Although the details have not been worked out, Brown will earn $750,000 a year — not all guaranteed — for five years, though his annual package could rise to $1 million if Brown reaches all his incentives, ranging from graduation rates to a national title. Brown had a $540,000 total package atthe University of North Carolina. UNC administrators made a large counteroffer early Thursday, sources said.

Dodds also said the contract includes rollovers after each of the first two seasons and again after his sixth season and every season thereafter, so he will never have fewer than two seasons left. The contract will also include a buyout, although Dodds said that hasn’t been ironed out.

The makeup of Brown’s staff is uncertain. Dodds said that is up to Brown, adding that they’ll start with a pool of about $750,000 to divvy up among the assistants, although that’s not a set limit.

“When our football coaches look for assistants, I’ve always said the same thing — you tell me what you want. And I’ve never said no.”

Sources say Brown might try to lure his good friend, Florida defensive coordinator Bob Stoops, away from coach Steve Spurrier. Stoopes reportedly makes between $125,000 and $150,000 and could be lured with a high offer, although it is thought he is waiting for Hayden Fry to retire at Iowa, his alma mater.

Dodds confirmed that the UT coaching job was a two-man race — he said only Brown and Northwestern coach Gary Barnett were contacted.

“This is not a knock on Gary Barnett, he’s one of the best coaches, but Mack just fit better at Texas, ” Dodds said.

Barnett, who has always coveted the Texas job, said he decided early Wednesday the job wasn’t for him.

“I got up in the morning and said, `I can’t do it, I don’t think I can do it, ‘ and really, for a lot of reasons — my players, what the university has done for me, my family, ” Barnett said. “My gut feeling is that this wasn’t the right thing to do.”

When Texas associate athletic director Butch Worley called him around noon to suggest their scheduled afternoon meeting be delayed, Barnett realized the job wasn’t for him.

Barnett, who has flirted with Notre Dame, Georgia and UCLA over the last two years, sounded as if he was ready to settle down.

“I’m here, and I will be here for the next 10 years of my contract and if Northwestern extends my contract, I will accept it, ” he said. “At this point in time, I’ve examined four prominent programs and believe this is the best for me.”

Faced with a similar decision, Brown chose to move on.

“I could tell by the look on his face when he walked in he was leaving, ” UNC receiver Na Brown said of the team meeting.

“It was a very emotional meeting. Coach had to stop a couple of times. There were lumps in a lot of throats and a lot of watery eyes.”

“It was almost like we were at a viewing, ” said running back Jon Linton.

That sentiment sat well with Dodds. “One of the reasons I like him so much is the pain he had over leaving.”