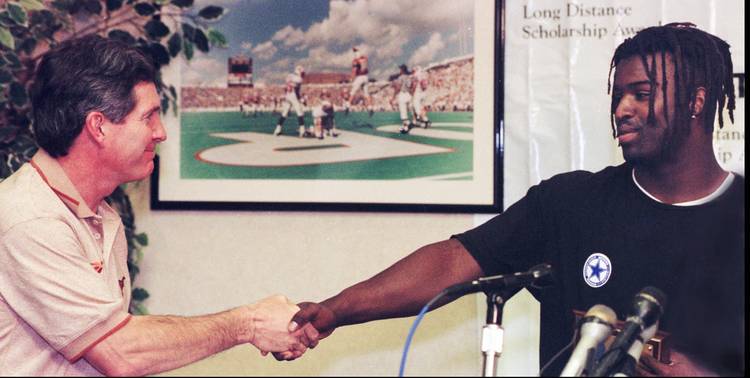 All-America running back Ricky Williams decided two weeks ago that he wanted to come back for his final football season at the University of Texas. But he said he wanted everyone to think he was going until he actually made his decision public.

“Everyone loves a surprise,” Williams said as he ducked out the back way of UT’s Bellmont Hall after his press conference Thursday afternoon. “I wanted people to think I was leaving, so people would be surprised that I was staying.”

He also said: “I wanted everybody to be happy that I’m staying.”

“When I came here three years ago, I set a lot of personal and team goals, to win a lot of games, maybe win the Heisman and get my degree. And that’s why I’ve decided to come back for another year.”

A beaming Mack Brown immediately stood up and hugged Williams, although the new head coach had heard the news with the rest of his staff in a private meeting 15 minutes before.

“We have just had a successful recruiting class,” Brown said to relieved laughter. “This is our first signee. He’s the best football player in the country returning next year.”

Williams’ decision was surprising, considering that he said as late as Wednesday evening: “I am leaning toward going professional. It’s always been a dream of mine to play pro football, and I don’t want to risk injury.”

He first denied a report Monday that he had decided to stay at UT, saying he had not made up his mind and anyone who said differently “didn’t know what he was talking about.”

Williams, who led the nation in rushing and scoring last fall, had until 5 p.m. EST today to make a decision about the draft. Last month, he took preliminary steps toward filing for the draft, filling out paperwork and gathering his UT transcripts. His Boston-based attorney was awaiting Williams’ OK before sending the forms to the NFL office in New York City.

Williams received advice from several college players who told him to stay. One was Florida State All-America defensive lineman Andre Wadsworth, who likely will be a top-five selection in April’s draft.

North Carolina cornerback Dre’ Bly also encouraged Williams to remain at Texas. Bly, a two-time All-American, told Williams to stay because he would “love” playing for Brown, who left the Tar Heels for Texas last month. Bly, a likely first-round pick had he left North Carolina this year, has decided to return to Chapel Hill for his junior season.

Had he entered the draft, Williams could have received a signing bonus of about $6 million. Early projections had the burly tailback being the first running back taken in the draft. He had been told by pro scouts that he could go as high as the fourth selection of the first round. Florida State defensive end Peter Boulware, who was picked in that spot by Baltimore last year, received a $6 million signing bonus and a total package of $18.5 million for six years.

Williams has an insurance policy through the NCAA that would pay him $2.8 million if he suffers a career-ending injury next fall.

“I’m not afraid of getting hurt,” Williams said. “You can’t live your life that way.”

Williams appeared confident and happy with his decision Thursday afternoon, but his mother said he wavered in the days since he wentback to his old home in San Diego to reach it.

“He would say what he planned to do, then say, `What am I doing? I’m turning down millions,”’ Sandy Williams said. “I didn’t take it to heart until he announced it at his press conference. He did what he felt was best for him. Ricky dances to the beat of a different drummer. He’s just Ricky.”

He also has steep, albeit reachable, goals for his senior season.

Williams, who owns 21 school records, has set his sights on the NCAA career rushing record of 6,082 yards by Tony Dorsett when he played for Pittsburgh from 1973-76. Williams is 1,928 yards away.

He also is 20 touchdowns from breaking the NCAA career record of 64 set by Indiana’s Anthony Thompson from 1986-89.

There also is the Heisman Trophy. Williams, who finished fifth in last year’s race, was crushed that he did not receive enough votes to be invited to the Heisman ceremonies in New York. He also quietly complained that the school did not start his Heisman campaign soon enough last fall.

Williams will be an early Heisman favorite. Three of the four players who finished ahead of him arein the draft pool and the fourth, Heisman winner Charles Woodson, is expected to announce today that he will leave Michigan a year early for the NFL.

“I think in Ricky’s case, the Heisman push started (Thursday), to be quite honest,” Brown said.