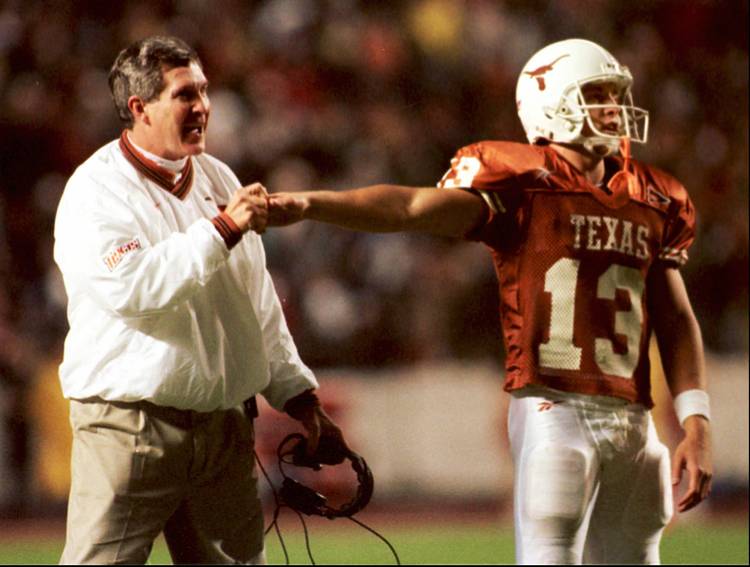 Kris Stockton had some time to kill Saturday afternoon and one desired way of killing it, if the Oklahoma State Cowboys would just let him.

Every time he tried to shut out the supportive screams of the sellout crowd of 81,437 fans, not to mention the derisive taunts of the Cowboys, count his steps, put his head down and prepare to kick the game-winning field goal, there came that annoying little whistling sound.

During the second of the breaks, Coach Mack Brown put an arm around his kicker and confided in him. “He said he was jealous because I had a chance to win the ballgame, ” Stockton recalled.

Jealous? Stockton was just trying to keep from hyperventilating. “I was trying to make myself relax. I kept telling myself, `Take a deep breath. It’s easy. It’s only 30 yards. I can make it in my sleep.’ ”

It was only 29 yards, not that it made it any easier. The snap came, the ball was placed and because the laces weren’t fully rotated, it pulled to the left. And pulled. And pulled . . . till it kissed off the left upright and through with three seconds left, giving the Longhorns a 37-34 win.

“I didn’t care if it hit the upright, the crossbar, BOTH crossbars or went all the way around and went back in, ” said linebacker Anthony Hicks. “It still counts for three points.”

It also counts as another step toward a bowl upgrade — now the Cotton is looking pretty good — but after last week’s stirring 20-16 upset at Nebraska, the Horns probably left Royal-Memorial Stadium on Saturday feeling more lucky than good.

Heisman Trophy candidate Ricky Williams was held to 90 yards on 23 carries, but gained 52 on seven carries in the fourth quarter as the Horns fought to hold off the upset-minded Cowboys and drive for the field goal.

Williams needs 204 yards in his final two games against Texas Tech and Texas A&M to break the all-time Division I-A rushing record of Tony Dorsett, who ran for 6,082 at Pittsburgh from 1973-76.

The Cowboys were determined that Williams wouldn’t run wild on them, blitzing frequently and putting up eight and nine-man fronts . Asked whether OSU’s strategy was to concede the pass, Coach Bob Simmons bristled.

“Concede?” Simmons said. “Our strategy was to control the running game and break on the ball (in pass defense). You don’t concede anything.”

It sure seemed that way. Quarterback Major Applewhite, who passed on five of the Horns’ first six plays and finished with 29 completions (out of 40 attempts) and 408 yards, both school records, was surprised by the Cowboys’ stubbornness.

OSU never did. Texas, which normally allows Applewhite to choose from a package of plays on about 35 to 40 percent of the snaps, did so six times out of 68 plays, according to Applewhite’s estimation. “Usually we use those when we DON’T know where they’re lining up, ” he said.

OSU was prepared to live and die by that scheme, and for a while it was quick death. By the end of the first quarter, Applewhite had thrown for 157 yards and two of his three touchdowns, and the Horns led 21-10.

Texas couldn’t figure out the OSU offense well enough to stop it. In the first quarter, OSU employed a five-wideout set — something it had shown only when motioning a back out of the backfield in previous games — to spread out the defense and neutralize the blitz. Exploiting the subsequent mismatches, Cowboys quarterback Tony Lindsay had 130 yards on only three completions.

In the second half, OSU gouged Texas with the option attack. “They used two tight ends and lined up in splits like on a PAT or field goal, ” Reese said. “In past films, they even overlapped.”

The tight formation prevented penetration by Texas, and Lindsay skillfully cut upfield on keepers. OSU had only one possession in the third quarter, but the Cowboys turned a Dwayne Levels interception in the end zone on the Horns’ opening drive, into a 94-yard, 18-play drive that was capped by a 2-yard Lindsay run to cut the Longhorns’ lead to 31-28 .

Stockton kicked a 45-yard field goal on the first play of the fourth quarter OSU tied it on a fluke play when tight end Marcellus Rivers, who scored on a 78-yard play in the first quarter, tipped the ball to Ethan Howell, who caught it in stride for a 55-yard touchdown.

Defensive tackle Cedric Woodard, who had come close to blocking previous field goal and PAT attempts in the game, surged through at left guard, got a hand up and deflected Tim Sydnes’ kick to keep the game tied at 34.

“I haven’t looked at the film, but he’s my guy, my player of the game, ” defensive coordinator Carl Reese said of Woodard.

As he did against Baylor two weeks ago, Williams stepped it up in the fourth quarter, breaking a 24-yard run on second and five that took the ball out to the Horns’ 46. Texas converted two key third downs, one on a 7-yard pass to Wane McGarity on third and three and the other on a pass interference call that gave the Horns the ball at the 17 with less than a minute left.

Williams ran for 5 yards on first down and then Applewhite, confused by an errant motion call sent in from the sidelines, hesitated over center before calling time out with seven seconds left. Texas had called a sweep left, designed to move the ball toward the left hash mark from which Stockton prefers to kick, but instead Stockton was forced to kick from the right. When OSU finally let him, anyway.

The kick was true, and up in the press box Reese finally smiled.

“The guy under the left upright didn’t see it, so he didn’t call it, ” he said. “He had to rely on his buddy. When he put his hands up, I could have kissed him.”