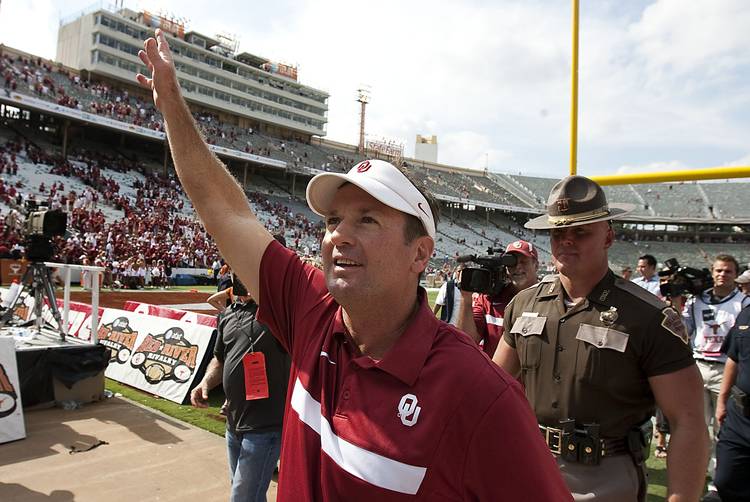 Bob Stoops, designer of two of the best college football defenses of the 1990s at Kansas State and Florida, will now try is hand at building an entire program.

Stoops, 38, was introduced on Tuesday as the head coach who will try steer the Oklahoma Sooners’ ship in the right direction after years adrift. He will have to do so against an increasingly strong tide of opposition in the Big 12, where several schools have strongholds, old and new.

“I shall not shy away from the expectations that you have at Oklahoma,” Stoops said at a press conference. “There are no excuses. You succeed or you don’t.”

Stoops has a five-year contract worth nearly $700,000 annually. Stoops, who has never been a head coach, worked as an assistant for three respected ones: Hayden Fry at Iowa, Bill Snyder at Kansas State and Steve Spurrier at Florida.

“This person, at every level, has excelled,” Oklahoma Athletic Director Joe Castiglione said.

Stoops, whose younger brother Mike is defensive coordinator at Kansas State, accepted the Oklahoma position instead of returning to his alma mater, Iowa, to replace the recently retired Fry.

Great assistants do not always make good head coaches, but one of Stoops’ former bosses would not bet against him.

“I’d be very surprised if he doesn’t make a great head coach,” said Florida Athletic Director Jeremy Foley. “He was born to be a head coach. Every move he has made was toward becoming a head coach.”

As co-defensive coordinator and later defensive coordinator at Kansas State from 1991-95, Stoops was part of the massive project in which Snyder improved the program from arguably the worst in the country to one of the best. Kansas State led the nation in defense in 1995. That caught the eye of Spurrier, who desperately needed a defense to complement his high-octane offense.

Between 1990 and ’95, Spurrier’s teams lost four games in which they scored 28 points or more, a severe problem for a program that fancied itself a national-championship contender. Following the 1995 season, the Gators were embarrassed in the Fiesta Bowl as Nebraska won the national championship 62-24.

With Stoops in charge of the defense in 1996, Florida reversed its fortunes, winning the national championship.

Now Oklahoma has entrusted Stoops with a program that has won six national championships — the most recent in 1985 — but has not produced a winning season since 1993. Stoops is the school’s fourth coach since 1994. John Blake, the most recent coach, was fired after a 12-22 record in three seasons.

Oklahoma, which used to secure some of the best high school players in Texas, signed only one from the Austin American-Statesman’s 1997 Fab 55 list. Texas and A&M are well established in Texas, and schools such as Colorado, Nebraska, Florida State, Notre Dame and UCLA have routinely siphoned talent from the state.

Oklahoma State Coach Bob Simmons has made some strong ties with high school coaches in Oklahoma. Kansas State is a new recruiting presence in Oklahoma, and the Wildcats have cornered the market on top junior college players in Kansas and Texas.

“Oklahoma is a very tough job right now,” said Bobby Burton, editor of the Austin-based National Recruiting Advisor. “But they have tradition up there, and that can help Stoops turn it around. I think they can do it, but it will take time.

“Oklahoma used to have a pipeline into Houston, the best football city in the state and the South,” Burton said. “But A&M and Texas are doing well there. Oklahoma used to get the top players in Oklahoma and the top junior college players in Texas and Kansas. Now Kansas State is dominating.”

There was a time when many Texas high school players who would rather play against the Longhorns than for them considered Oklahoma the best alternative. With the formation of the Big 12 in 1996, that field is wide-open, perhaps making Oklahoma’s job even more difficult.

Allen Wallace of SuperPrep magazine said Stoops can succeed by hiring assistants who have connections in parts of the country where the Sooners have recruited or want to recuit. According to sources, former University of Texas assistant Bobby Jack Wright will interview this week for a position at Oklahoma.

“Things can turn around quickly,” Wallace said. “Notre Dame had been as low as it had ever been, but three years later they won a national championship (1988) under Lou Holtz. And look at B ob Toledo. Two years after being second-guessed as the choice as UCLA coach, he beat Texas by 60 points.”