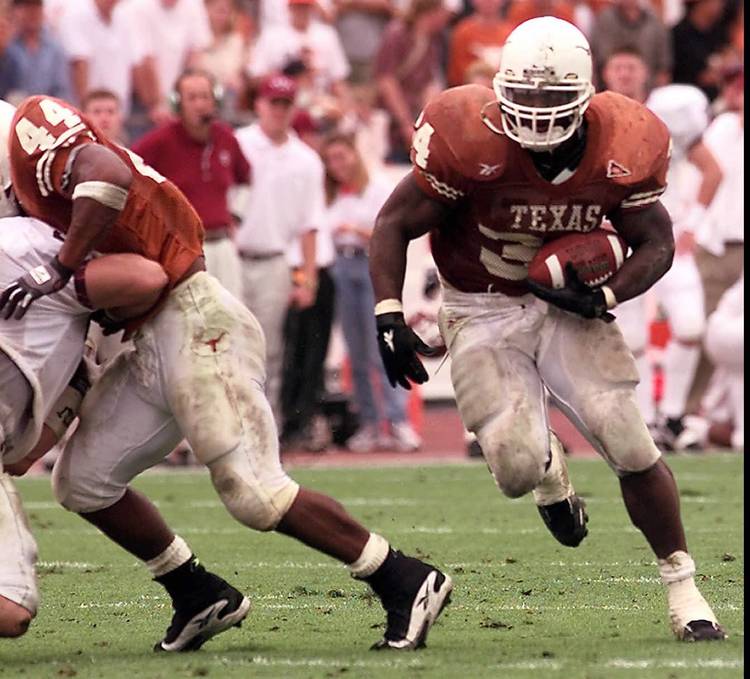 Ricky Williams knew. Knew exactly. He wasn’t just trying to be cute when, at his January 1998 press conference to announce he would return for his senior season, he answered a question about how many yards he needed to pass Tony Dorsett’s all-time NCAA major college rushing record by saying, “something like 1,928.”

It was exactly 1,928. Williams knew if he gained that — and he was supremely confident that he would — he would also more than likely win the Heisman Trophy.

He didn’t have much company with that confidence.

“When we started the season, I thought the record was a stretch,” said offensive coordinator Greg Davis. “What did he need, like more than 1,800 yards? I’d never been around a back like that.”

Williams entered the season coming off a 1,893-yard season, 12th best in NCAA Division I-A history, and his return assured that he would be the focal point of the Longhorns’ offense. First-year Coach Mack Brown, who pronounced his first recruiting class a huge success the day of Williams’ announcement, knew he had to balance team goals against rewarding Williams’ decision to return.

“Mack did a great job from the very beginning,” Davis said. “There are a couple of ways you could have approached the record and the Heisman watch. Mack embraced it from the beginning, saying it was a team award, that to win it we have to win games and put points on the board. Obviously, the team bought into it.”

Maybe not at first.

“Personally, during the summer I didn’t think he had a chance of breaking the record,” said guard Ben Adams. “I thought he’d see a lot of eight-, nine-man fronts and they’d key on him. It wasn’t until he had back-to-back 300-yard games and I saw in the paper what he needed to average the rest of the season that I thought it was attainable.”

Through the first three games of the season, Williams’ Heisman candidacy appeared shaky. He opened with 215 yards and six touchdowns against New Mexico State, but the next week at UCLA he gained 92 of his 160 yards and scored all three of his touchdowns in the second half, after the game was no longer in doubt. The following week at Kansas State, Williams gained only 43 yards on 25 carries, and his Heisman hopes were in serious peril.

“When Ricky struggled a little against Kansas State there was talk he was out of the race,” quarterback Major Applewhite, who made his first career start against the Wildcats’ vaunted defense, said at midseason. “Listen, Ricky’s never out of the Heisman race. He’s the best player in the country. If people judge him on one game, that’s not smart.”

Williams would quickly give them two games to clean their football palet. Texas bounced back from the 48-7 loss to KSU by trouncing Rice 59-21, behind Williams’ 318 yards and six touchdowns. During the fourth quarter, Williams and Brown struck a deal. One more series to try to get his first 300-yard game.

As he would later do in breaking Dorsett’s career rushing record, Williams made 300 in one spectacular play, a 41-yard touchdown run. He got his 300 game, but he was still 25 yards short of breaking Roosevelt Leaks school single-game record. He was disappointed.

It would last a week.

Seven days later, Williams shredded the Iowa State defense for 350 yards and five touchdowns, and suddenly he was not just a Heisman candidate, he was the clear frontrunner.

After the record run, Williams went up and down the bench, thanking his offensive linemen.

“We knew he appreciated us. We told him to go sit down. He was tired,” center Russell Gaskamp said after the game.

With the Heisman and Dorsett’s record both within reach, Williams and the team’s focus sharpened. He gained 139 yards against Oklahoma — after which Gaskamp worried aloud that his holding penalty on a 78-yard touchdown run might be the difference in breaking Dorsett’s record — and followed it with a 259-yard night against Baylor, an effort that brought Texas fans to their feet for two reasons. One, the way he carried the team to a fourth-quarter comeback, something he had long hoped to do. Two, when he hopped off the field in the final minute of the first half after getting his shin stomped by Baylor end Charles Foster.

“In some cases kids hit him late because they want to discourage him,” Brown said. “He keeps coming. They beat him up every week, hit him, pinch him, talk to him. That’s something great running backs have to live with.”

Williams’ shin was fine, but he then faced the most stringent test of his Heisman mettle — the Nebraska Blackshirt defense. Two years earlier in the first Big 12 Championship game, the Cornhuskers held him to only seven yards on eight carries. This season’s game was broadcast regionally by ABC, giving Williams the perfect foil and perfect stage to validate his candidacy.

Williams gained 150 yards on 37 carries, none more important than his 38-yard sprint around left end late in the first quarter. The run was significant — jump-starting a Texas drive that began with the Longhorns backed up to their own 11 — but it also guaranteed him a respectable rushing total (82 yards at that point) against a respectable defense, good ammunition for the argument that that one play won him the Heisman.

“Sometimes I sit and look at Ricky and say, ‘You can win that thing. Isn’t it unbelievable? Aren’t you excited?’ ” teammate and close friend Wane McGarity said after the Nebraska game. “He’ll say, `Yeah.’ If it was me, I’d be jumping out of my pants.”

With three games left, Williams needed 294 yards to pass Dorsett. But Oklahoma State committed its safeties to stopping the run like Kamikaze pilots diving on battleships, and Texas took to the air. Williams gained only 90 yards, and with the record so close, Brown wanted to gauge his star’s feelings about not getting the ball.

“I sent (running backs coach) Bruce Chambers to ask him and he said, ‘Don’t worry. Winning is bigger than my stats, ‘ ” Brown said. “Of all the things I’ve seen him do, that’s probably the most impressive.”

Texas won the game, though, and the following week Texas Tech did not stack the line to stop Williams. He gained 141 yards and entered the A&M game needing only 63 yards for the record.

Williams knew it was his time to shine.

“Last year I think the reason (Michigan’s Charles) Woodson won the Heisman was because he played Ohio State on national TV and had a great game,” Williams said.

The pressure was on. A Reebok billboard looming over the Denius Field practice site was a constant reminder that he needed 64 yards to break the record. A Sports Illustrated cover that pronounced him better than his dazzling statistics warmed his heart and whetted his appetite.

“When I got (to Texas) I was looking through some old clippings and I saw (1977 Longhorn Heisman winner Earl Campbell’s) cover and it said, ‘Mmm mmm great,’ like Campbell’s Soup. I wanted mine to say, ‘Mmm mmm greater.’ ”

Before the game, Texas A&M’s defense, ranked No. 2 in the nation, graciously conceded the record to Williams. But when the game started, the Aggies didn’t concede anything. Through his first four carries, Williams had only seven yards.

Dorsett’s record was 11 yards away late in the first quarter, when on first-and-10 at his own 40-yard line, Williams took a handoff, followed a block by fullback Ricky Brown, broke a tackle by the cornerback and then skirted around a McGarity block at the 5-yard line to leap into the end zone and the NCAA record book.

After the A&M game, with Williams’ place in college football history secure, Davis retreated back to his house, flopped down in his easy chair and turned on the Colorado-Nebraska game. “I was exhausted, totally spent,” Davis said, “and I was thinking to myself, ‘What must Ricky have been going through?’ Not only did he have to handle the media, the constant, ‘Can you break the record? When will it come?,’ but the physical pounding. He had just carried the ball 44 times and took a beating.

The story makes Davis think of another moment, a week earlier, when he was talking with Brown about the pressures of calling plays with the record on the line. “I told him, halfway kidding, ‘This has become a bit of a burden,’ ” Davis said.