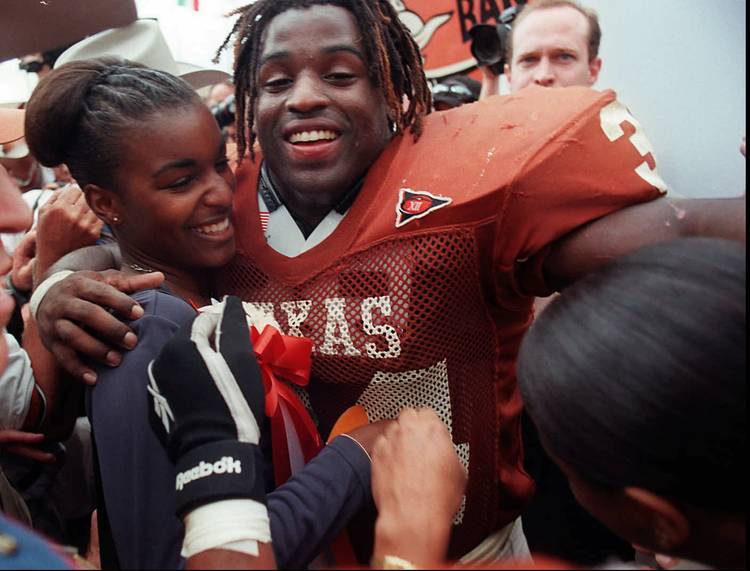 Photo by Brian K. Diggs/AA-S - Texas running back Ricky Williams hugs his sisters after the game against Texas A&M at Memorial Stadium Friday, Nov. 27, 1998. During the game Williams moved ahead of Tony Dorsett to become the NCAA I-A all-time leading rusher.

“Someone might look at him and think, `Dreadlocks; OK, what do you do with dreadlocks?’ ” Stapleton said. “I don’t think you market the dreadlocks, even though he looks more like a surfer than a football player. The X-Gen, Mountain Dew, way-out-on-the-edge kind of thing would narrow and cheapen the Ricky brand. You want the Fortune 500. A lot of football players, that’s all they are. There’s nothing to say, no story to tell. That’s not my impression with Ricky.”

Free-spirited California kid comes to Texas, becomes college football’s all-time leading rusher, wins the Heisman Trophy in a landslide, carries his team to the Cotton Bowl, helps sell everything from burnt-orange jerseys to luxury boxes, and all the while manages to keep his dreadlocked head on straight. Quite a story. And it’s just becoming a real page-turner with Williams about to join the ranks of million-dollar professional football players.

“Money is not important,” maintains Williams, who could have turned pro a year earlier but returned for his senior season at the University of Texas. Maybe not. But it’s about to come rolling his way.

The NFL draft this year is on April 17-18 and is often a very fickle affair. Just ask receiver Randy Moss. Widely acknowledged as one of the most talented prospects in last year’s draft, Moss was passed over by 20 teams concerned about his checkered past and was eventually chosen by the Minnesota Vikings.

Unlike Moss, however, Williams won’t have any question marks about his character. Sports Illustrated recently projected him as the second pick in the draft, and most experts have him going within the top three.

The Cleveland Browns, now reincarnated as an expansion team after the old franchise left for Baltimore, have the first pick. Rumors are that Cleveland will take Kentucky’s junior quarterback Tim Couch if he turns pro. The old Browns, however, had a tradition of great running backs that began even before they had the incomparable Jim Brown. The new Browns might want to re-establish that tie to the past by selecting a runner like Williams.

Whatever the case, Williams appears to have actually earned money by passing up the pros last year. Williams then, at best, would have been the fifth pick, behind Heisman Trophy winner and fourth pick Charles Woodson , who plays cornerback. In the NFL draft, every place can count.

Last year, the Indianapolis Colts had the draft’s first pick and selected Tennessee quarterback Peyton Manning. Manning signed a six-year deal worth $38 million with incentives that could push the total to $48 million. The No. 2 pick, quarterback Ryan Leaf, got a five-year deal reportedly worth $31 million. Woodson signed a six-year deal with the Oakland Raiders reported at $14.5 million. Running back Curtis Enis, a Penn State junior who turned pro after having contact with an agent, was picked fifth and had to settle for a three-year deal worth $5.5 million from the Chicago Bears.

Terrell Davis, the most valuable player in last year’s Super Bowl, is reportedly the NFL’s best-paid running back, with a nine-year deal worth $56.1 million.

For many professional athletes, salary is just a starting point.

While in Dallas for the Cotton Bowl, Williams huddled with Cowboys star running back Emmitt Smith at his lavish digs. According to Williams, Smith said, “The money you make on the field will keep you secure for life, but the money that you can make in endorsements got me this house.”

For years, until his old contract with the Chicago Bulls expired, Michael Jordan earned far more off the court than he did on it. When Forbes magazine listed the top money earners in sports last year, Jordan was making $47 million from his acting and endorsements of everything from Nike to his Bijan cologne. Forbes had Tiger Woods earning $24 million off the course, and golfers Greg Norman and Arnold Palmer making eight figures for endorsements, along with tennis player Andre Agassi, race drivers Michael Schumacher and Dale Earnhardt and basketball players Grant Hill and Shaquille O’Neal.

Despite playing America’s most popular sport, NFL athletes generally aren’t big earners off the field compared with some other athletes. Football players can’t push their cleated shoes the way basketball players hawk theirs, and their faces would be a lot more familiar if they weren’t covered with face masks while they were performing.

Still, it’s impossible to predict exactly which athletes are going to strike a chord with the public. Williams, who recently signed with baseball’s Texas Rangers, has the cachet of being a possible two-sport star.

“I think he could be in the top 10 in endorsements,” Stapleton said. “I think he’s special because of all the positive publicity he has generated. He has a sense of style and self-awareness that sets him apart. He crosses racial lines and age groups. He has a sense of humor. He’s approachable. His age group is Generation X, but he shows that Generation X is not a license to be lazy and not ambitious.”

Williams already has flexed his financial muscle while at the University of Texas.

Royal-Memorial Stadium may not be the house that Ricky built, but he sure helped move the luxury boxes. A month before the football season began, 21 of the 64 boxes, which typically lease for $50,000, were still available. But they were all gone by the time Williams had helped transform a 4-7 team into a Cotton Bowl contestant.

The regular season was profitable for UT, as well. UT had three sellouts in its 80,216-seat stadium. Ticket sales were up $750,000 over the previous season, to $9.75 million. Even the football awards banquet, with 2,500 diners, was a rare sellout.

In its first year as a partner with Collegiate Licensing Company, UT conservatively estimates it will make $800,000 this year, $200,000 more than last year.

“As far as concessions, we had our best year ever,” said Jim Baker, assistant athletic director at UT. Baker said the Longhorn Limited store, located on the stadium’s west side, did $676,282 worth of business during the football season. Last year’s football season generated $372,268 .

“I think it was (Coach) Mack (Brown) in the beginning,” Baker said. “Everybody wanted to wear orange. No one had enough orange to sell. Then, obviously, it was Ricky, then the success of the team.”

Chris Plonsky, associate athletic director at UT, said: “You can’t pinpoint it all to Ricky. We’ve improved our facilities, and at the same time Ricky was a Heisman candidate, we have a coach who everyone loves, a team that is crescendoing through the season.”

Woody Woodman, a director of Longhorn athletic department fund raising, said Williams contributed to an environment that brought in $3 million in contributions since the start of football practice in August.

“You really can’t peg philanthropy on any one thing unless you actually interview the people donating. . . . But when you have a set of circumstances like we had this fall, it absolutely is the best environment you can possibly have. People were very excited, very receptive and very supportive.”

At the start of August, the Longhorns had raised $24 million in their current campaign to raise $30 million. The total now tops $27 million.

The profitable association with Williams might not be over for UT. The school is looking into marketing such items as a video and a phone card, with Williams as a financial partner. Then, there’s the residue from the Heisman campaign, which brought the school the kind of exposure with donors and potential recruits that it hasn’t seen in more than a decade.

“If you’re looking for economic impact, all you have to do is try to buy time on `Good Morning America’ or David Letterman,” University of Texas assistant athletic director Bill Little said.

FROM THE ARCHIVES: For UT, it’ll be a big day against Big Red