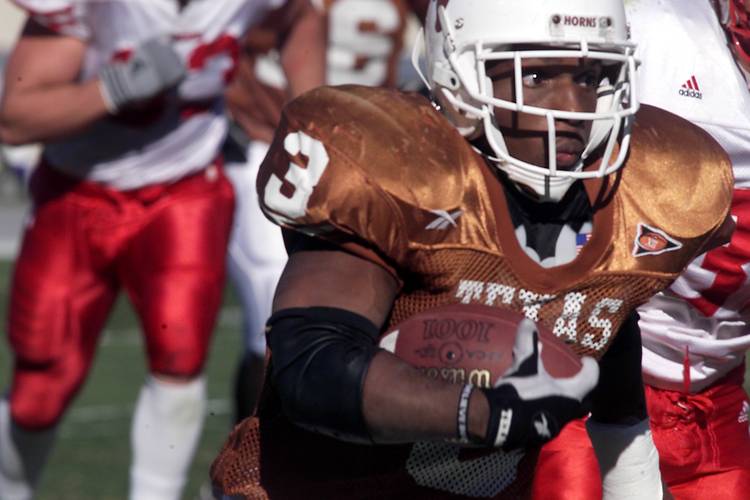 Major Applewhite was exactly where the Nebraska hopeful expected him to be — prone, grass-stained, helmet askew, head bowed, surrounded by Cornhuskers.

And deep in prayer.

This entreaty from the sophomore supplicant ended with a small request.

“I wished them the best of luck,” the Texas quarterback later said.

The Huskers would need it.

Applewhite’s wishes came not at the bottom of a Cornhuskers pass rush with the the game on the line, but at the north 45-yard line as part of a Fellowship of Christian Athletes group prayer. A postgame prayer. One in which Applewhite was the one who clearly had the most about which to give thanks.

For the third time in their last three meetings, an underdog Texas team proved to be the answer to the Cornhuskers’ national title prayers. The answer again was no, just as it had in the inaugural Big 12 title game in 1996 and at Lincoln last Halloween.

This time, the 18th-ranked Longhorns protected their quarterback, avoided turnovers and rallied from a 10-point deficit to take a 24-20 win over the third-ranked Cornhuskers and make them prime candidates for a little therapy over their obsessive-compulsive disorder — they can’t help but lose to the Longhorns.

And they could use a little help with their denial.

“I think we showed who was the better team today,” said Nebraska I-back Dan Alexander. “We just made mistakes.”

That argument didn’t wash with the Longhorns after a loss to Kansas State three weeks ago, and it didn’t wash Saturday. Nebraska (6-1) turned the ball over three times, twice in the Texas red zone, and showed poor clock management. The Huskers used up all three of their second-half timeouts with 13 minutes, 7 seconds left in the game — timeouts they could have used in the final two minutes, as Texas easily ran out the clock.

After a 9-yard Eric Crouch run put Nebraska back ahead 20-17 with 7:52 left, Texas — using a 39-yard gain when Ryan Nunez beat Ralph Brown on a post pattern down to the Nebraska 21 — came back in four plays. On third and six at the Nebraska 17, tight end Mike Jones ran a “flat” route — straight down the line of scrimmage — and both Huskers defenders went to Cavil, who got away with a hold on Mike Brown. Applewhite tossed to Jones, who broke three tackles to put Texas up 24-20 with 5:51 left.

Nebraska drove from its own 35 to the Longhorns 38, where on fourth and seven defensive coordinator Carl Reese came up with a tested defense. He blitzed strong-side linebacker Anthony Hicks, just as he did on the Huskers’ last offensive play in a 20-16 Texas win last year, and the results were the same — Crouch threw it away under pressure.

Void of timeouts, the Huskers could only watch helplessly as the Longhorns ran out the clock.

Even though the Longhorns trailed 13-3 at halftime, they had three things going for them.

One, they had established the running game. Hodges Mitchell, who would finish with 83 yards, benefited from a zone blocking scheme that allowed the Texas linemen to block the swift Nebraska linebackers head-on.

“He’s running extremely hard, but he’s running with vision,” said offensive coordinator Greg Davis of Mitchell, who’s needs to average 81.5 yards over the last four games for an unexpected 1,000-yard year. “Early in the season, I thought he was running with blinders on.”

“We felt up front with our size and speed, we could run right at them,” said guard Roger Roesler.

The running game also took the Huskers out of their blitz, which they used frequently and somewhat uncharacteristically in the first quarter, bringing up to six rushers.

“Our offensive line played so well after the first quarter that Nebraska just gave up on their rush,” Applewhite said.

Third, the Longhorns defense, led by tackles Casey Hampton and Shaun Rogers (nine tackles, five for loss) and linebacker Everick Rawls (two fumble recoveries) had played well enough against a Nebraska rushing attack that had more success by the hard off-tackle running of Alexander (21 carries for 136 yards, the first 100-yard rusher the Horns have allowed this year) than the option wizardry of quarterback Crouch (17 for 35 yards, including 17 yards in sacks).

Texas also made the big plays. Three times the Horns stopped Nebraska on fourth down — at the Texas 34-yard-line in the first quarter, at the Texas 42 in their third and at the Longhorns’ 38 with 2:15 left.

Even Texas’ special teams, beat up much of the year, got the breaks. Punter Ryan Long hit line drives all day — including one he hit 37 yards while wearing Nebraska safety Mike Brown as a necktie. The Horns got some bounces, but three times the Huskers started scoring drives in Texas territory, at the 17- (field goal), 31- (touchdown) and 44- (touchdown) yard lines.

What Texas needed to do, and ultimately accomplished, in the second half was to juice up a passing game in which Applewhite passed for only 47 yards on nine of 21 completions in the first half. “I came in at halftime thinking, `This is ridiculous,’ ” Applewhite said. “ `I’m playing like I’m back in Pop Warner.’ ”

“Halftime was no Knute Rockne, no screaming,” Davis said. “It was just, `The plays are there, bud — you have to make them.’ ”

Texas began extending its passing game downfield, partly because Nebraska had backed off its blitz and partly because Davis felt the Longhorns could exploit safety Mike Brown. “Our offense is looked at as one that nickels and dimes down the field,” Davis said. “But for every one of those, there’s a quarter or 50-cent piece built in.”

Applewhite had the correct change. He threw eight passes to Cavil for 84 yards and found Hodges Mitchell on three more for 45 yards, including a 36-yarder that set up the Horns’ first touchdown.

Texas, down by 10 points at halftime, came back with a 1-yard run by Chris Robertson and a 13-yard slant pass from Applewhite to Kwame Cavil to take a 17-13 lead after three quarters. Nebraska’s first possession of the fourth quarter ended at the Longhorns’ 2, when cornerback Ahmad Brooks forced a Crouch pitch and then recovered to run down Correll Buckhalter and force a fumble as Buckhalter tried to stretch for the end zone. Hampton, who earlier had forced a fumble, recovered to end the advance.

It was that kind of an afternoon for the Huskers, who left professing they were still the better team, an empty feeling they’re fast getting used to.

“We don’t have their number,” said Brooks, careful to not offend should the teams meet again in the Big 12 title game on Dec. 4. “But we do have three wins.

“You figure it out.”

FROM THE ARCHIVES: For UT, it’ll be a big day against Big Red

FROM THE ARCHIVES (Aug. 20, 2001): It’s showtime for touted recruiting classes