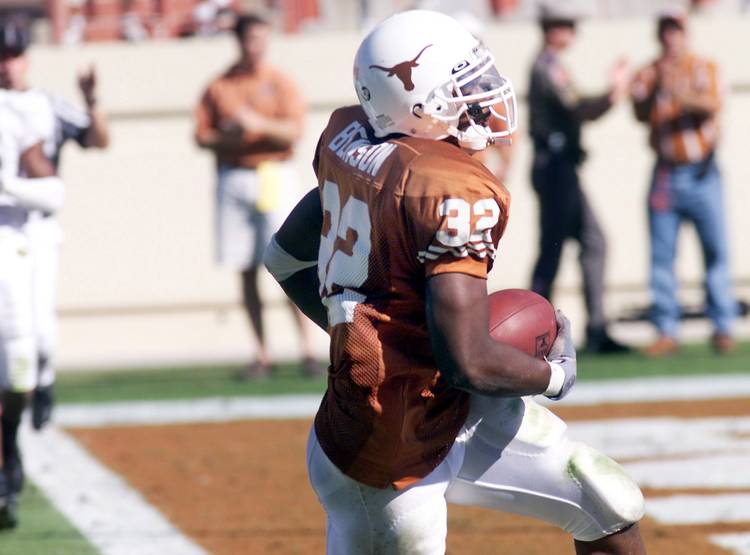 Brian K. Diggs/American-Statesman - Texas running back Cedric Benson strolls into the endzone for his first touchdown against Colorado at Royal-Memorial Stadium Saturday. 10.20.01

There was no sparkling trophy given out that February morning three winters ago. Coach Mack Brown wasn’t showered with gallons of Gatorade, nor was he carried off the field on the broad shoulders of his University of Texas football players.

But there were a whole bunch of Longhorn assistant coaches grinning as if they had won a seven-figure lottery. High fives were thrown as they watched a fax machine in Bellmont Hall on the UT campus spew out national letters of intent from members of a class that was voted the best group of recruits in the country.

Twenty eight high school seniors signed with UT that morning, including the best offensive and defensive prep players in the country.

The question that morning as it is today: Could a mythical recruiting title eventually translate into a bona fide national championship?

As a rule of thumb, coaches give college players until their third year on campus before they start expecting them to contribute on the field. This is the third year for the 1999 class. Of the original 28, 18 are still on the team and half of those are starters.

Eight have transferred. One was dismissed from school because of academics. And another, defensive lineman Cole Pittman, died in late February in an automobile accident.

“We’ve held up pretty good, ” said Rod Babers, the best defensive back in the 1999 class who has started since his freshman year at UT. “A lot of the guys are making a big difference. . . . I think we’re holding up our ranking.”

Recruiting is about as inexact as you can get, involving the scrutinization of piles of video tape, gathering of multiple opinions and gut feelings of coaches and self-annointed gurus who collectively predict what kind of players teen-agers will evolve into by the time they reach the age of 21.

In 1999, Texas was the unanimous selection for the No. 1 recruiting class as chosen by the main recruiting publications — SuperPrep, Prep Football Report and The National Recruiting Advisor, which has since evolved into Rivals100.com. At the time, the Longhorns were coming off a 9-3 season, which was highlighted by Ricky Williams run to the Heisman Trophy.

The only other schools to make the top 10 on all three lists in 1999 were Alabama, Louisiana State, Michigan, Notre Dame, Ohio State, Texas A&M and UCLA.

Yet the Longhorns are the only team in this year’s preseason AP top 10 that was a consensus recruiting top 10 pick in 1999. However, top-ranked Florida, No. 2 Miami, No. 6 Florida State and No. 8 Tennessee made the top 10 of one of the three main recruiting lists.

The top-ranked Gators put together what was considered only the fourth-best class in the powerful Southeastern Conference behind Alabama, LSU and Georgia in 1999. Florida Coach Steve Spurrier said about his class: “Maybe we don’t need to be ranked No. 1 in the country in recruiting. I’d say we need to be at No. 5, 7 or 8 — that’s probably as good a spot as any.”

Farrior is a backup redshirt sophomore linebacker. Grossman is a redshirt sophomore quarterback locked in a battle for the starting job with Brock Berlin. Sheppard is a junior cornerback and one of the nation’s premier defenders and punt returners.

UT’s 1999 class has formed the cornerstone of what might be a national championship team. Since then, Brown has put together consecutive top-five classes. He is the only coach in the country who has recruited a top-five recruiting class in each of the past four seasons.

“The 1999 class has responded well, ” Brown said. “But classes should be voted on after they’ve been here five years, not before they get here.”

The headliners of the 1999 class — Chris Simms and Cory Redding — still are the stars today. Simms, who was selected high school offensive player of the year in 1999 by USA Today, is UT’s starting quarterback and has been mentioned as a possible Heisman candidate this year.

Other members of the class who appear to have locked up starting spots for the 2001 season include fullback Matt Trissel, tight end Bo Scaife, defensive tackle Marcus Tubbs and Babers. Another two starters will be selected from among three offensive linemen — Derrick Dockery, Robbie Doane and Tillman Holloway. And Dakarai Pearson likely will be a starter at safety.

Brown followed his 1999 recruiting success by putting together a group of 21 high school seniors who were ranked No. 3 nationally. That class now accounts for three starters — wide receivers Roy Williams and B.J. Johnson and defensive end Kalen Thornton. In addition, five sophomores are currently on the second team. Combined, these two classes have accounted for just more than half of UT’s first-teamers.

“I think the (2000) class is the better class, the Roy Williams, B.J. Johnson, Kalen Thornton class, ” said Jerry Scarbrough, a local recruiting analyst and publisher of True Orange. “But I wouldn’t throw back the Chris Simms, Cory Redding class.”

Only two of the newcomers from the 2001 class, which was ranked among the top five on the three major recruiting lists, figure to be playing early in the fall. Then again, running back Cedric Benson and linebacker Derrick Johnson were the undisputed stars of this year’s incoming recruits. Both made the prestigious Parade magazine All-America squad.

FROM THE ARCHIVES: Creamed Corn