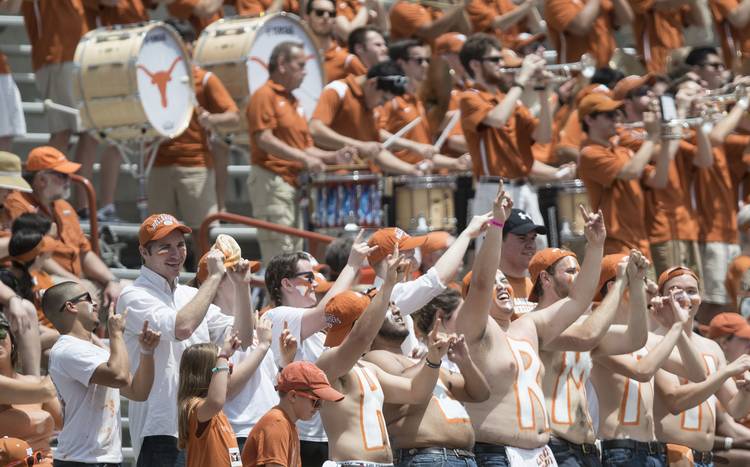 Texas and Colorado in the Big 12 championship game, just like we thought, right?

Yeah, and I’ll chip in a hammock on some nifty, oceanfront property in Odessa.

And to think they call this the “regular” season.

Obviously, there’s been nothing regular about this wacky college football season that has been turned upside down and sideways with losses by Nebraska and Oklahoma, the two teams ranked first and third by the Bowl Championship Series. So much for foregone conclusions. Now those two heavyweights are just plain gone from any championship puzzle.

The improbable became not only possible but unbelievable, mind-blowing fact when the Cornhuskers were shocked 62-36 by unproven Colorado and 24 hours later the Sooners were stunned in their own backyard by a 3-7 Oklahoma State team that had barely beaten Baylor. Just goes to show you that on any given day, any team can blow a national championship.

With that 16-13 upset of Oklahoma on Saturday, Texas had its ticket punched for this week’s Big 12 championship game in Irving, but let’s get one thing straight: The Longhorns weren’t given anything.

They earned it by winning six straight games since losing to Oklahoma and never even trailed in any second half. Texas, it should also be pointed out, beat Colorado and Oklahoma State by a 86-24 margin.

Seems like that 14-3 loss to the Sooners in the Cotton Bowl about 10 miles from Texas Stadium — the site of the league title game — didn’t end the Longhorns’ season, after all.

“People gave us up for dead after that, ” Texas Coach Mack Brown said Saturday night. “We’re a lot better now. Right now, we can say we’re one of the best teams in the country, and I think Gary (Barnett) tells his Colorado team the same thing.”

Following that gut-wrenching defeat by OU, I wrote that Texas could still go 10-1 and play in a BCS bowl, that the Longhorns were not that far off. They obviously weren’t.

But interestingly enough, the championship game comes high in risk as well as reward.

The 10-1 Longhorns now control their own fate and can guarantee themselves a berth in a BCS bowl, maybe even the BCS bowl in Pasadena, although Miami’s looking like it belongs in the NFC East.

But they also can lose a BCS spot by becoming a two-loss team and forfeiting the automatic berth to Colorado and the Big 12’s likely at-large bid to the 11-1 Huskers.

So be careful about the gloating, Texas fans.

It would be sweet to rib the Sooners, who razzed the hardy Horns who traveled to Lubbock in hopes of witnessing an OU loss to Texas Tech and gleefully derided them for their “waste of gas money.” The temptation is strong to advise Okies to take advantage of dipping gas prices for the drive to Dallas for the Cotton Bowl, but in this Russian roulette of a college football season, Texas fans shouldn’t go there.

They should just be glad for where they are going on Saturday.

Winning rematches is no easy chore, and it especially won’t be, given Colorado’s recent roll. Texas can speak to that personally after beating Nebraska in Royal-Memorial Stadium in 1999, only to lose round two to the Cornhuskers in the Big 12 finale at the Alamodome. The Longhorns had zero turnovers in Austin, four in San Antonio. The first-time loser always has a clear advantage, and Texas can’t count on four Buffalo turnovers as it received on Oct. 20.

But, Mack, can your Longhorns get to the national championship game and win it all?

“The reason this team is even playing in the conference championship game is it has focused on the game at hand, ” Brown said. “All our focus is on Colorado.”

And give this team and coaching staff big-time credit for that. Texas still might get to the Rose Bowl, but it has to beat the Buffs and have Miami lose to Virginia Tech, Florida fall to Tennessee or to the SEC West champion and Oregon get bumped off by Oregon State.