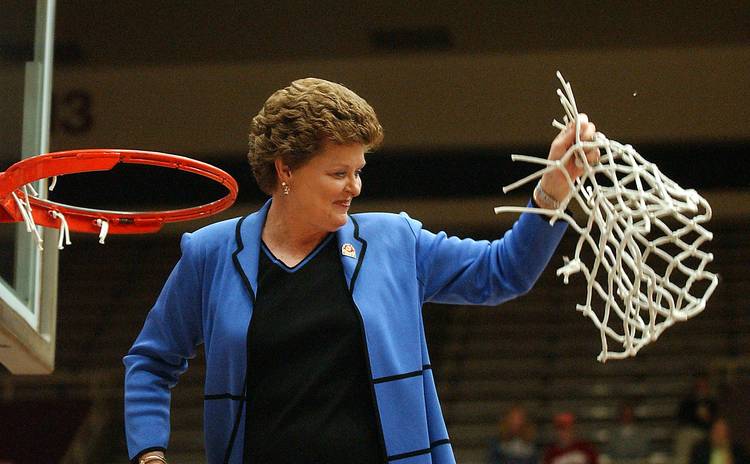 Deborah Cannon/American-Statesman Texas coach Jody Conradt throws the net down to her team after they beat LSU 78-60 at the NCAA 2003 West Regional Women's Basketball Championship Final in Palo Alto, California, on Tuesday, April 1, 2003.

PALO ALTO, Calif. — The hottest team in the nation was hotter than it has been all season in a game-turning first half Tuesday night.

The Texas Longhorns were so hot, in fact, they were scoring from everywhere on the court.

And even off the court.

At halftime Heather Schreiber was awarded a three-point shot on a jumper that was originally ruled a two-pointer, giving Texas a 19-point lead. The Longhorns never cooled off en route to a 78-60 victory over Louisiana State in the NCAA women’s basketball tournament West Regional final at Maples Pavilion.

Schreiber, the regional’s most valuable player, scored a career-high 32 points, Stacy Stephens recorded her 15th double-double this season with 14 points and 12 rebounds, and Jamie Carey, who did not play in a previous game this season against top-seeded LSU (30-4), demonstrated what a huge difference she could make by scoring six points, dishing out four assists and committing just one turnover.

The No. 5 Longhorns (29-5) extended the nation’s longest winning streak to 17 games and advanced to the Final Four for the first time since 1987.

The 16 years since Texas last reached the Final Four have been filled with ups (three Elite Eight appearances) and downs (two losing seasons). “I thought this team played about as well as a team can possibly play,” said Longhorns Coach Jody Conradt, who notched her 700th career victory at Texas. “We had contributions from everybody on the squad. We were focused and took advantage of every opportunity.”

That was in vast contrast to UT’s play in a 76-58 loss to LSU in Baton Rouge on Dec. 28, when Texas had just a one-rebound edge.

Schreiber plagued the Tigers — hitting 13 of 21 shots from the field, including two three-pointers — and converted all four free throws she attempted. The sophomore also grabbed eight rebounds.

Texas missed its first five three-point shots and converted just 1 of its first 8 field-goal attempts, quickly falling behind 11-4. The Longhorns bounced back even quicker.

Texas broke out of its early slump in a big way, routinely working the ball inside and beating the Tigers on the fast break to hit 60.7 percent of its shots (17 of 28) for the rest of the half.

Dillard and Stephens each scored six points in an 18-0 run that staked the Longhorns to a 22-11 lead with 9:45 to play in the half.

LSU’s Ke-Ke Tardy momentarily interrupted the Longhorn rally with a put-back and Aiysha Smith followed with a baseline layup, but Schreiber hit an 18-footer than sparked a 10-2 run for a 32-17 lead with 3:47 to go in the half.

The Longhorns were far from finished.

They closed the half with an 8-2 run to take a 40-22 lead, which increased to 41-22 when Schreiber was awarded the extra point.

But there was still a feeling of uneasiness in the Texas locker room.

LSU had rallied from 17 down to overtake Louisiana Tech in Sunday’s semifinal win, and came back from a nine-point deficit in the second half to beat Texas in their previous meeting.

“We were focused because we knew they had come back on us before and they came back on Louisiana Tech,” Stephens said. “We knew their capabilities — if they stepped it up we had to step it up and match what they did.”

The Longhorns did that, building their lead to as many as 30 points in the second half, and LSU never drew closer than 16.

Again, much of that was because of Schreiber, who scored 21 points in the second half.

“The more shots I made the more confidence I got,” she said. “I wanted the ball in my hands.”

FROM THE ARCHIVES: Big question: T.J., how do you do it?