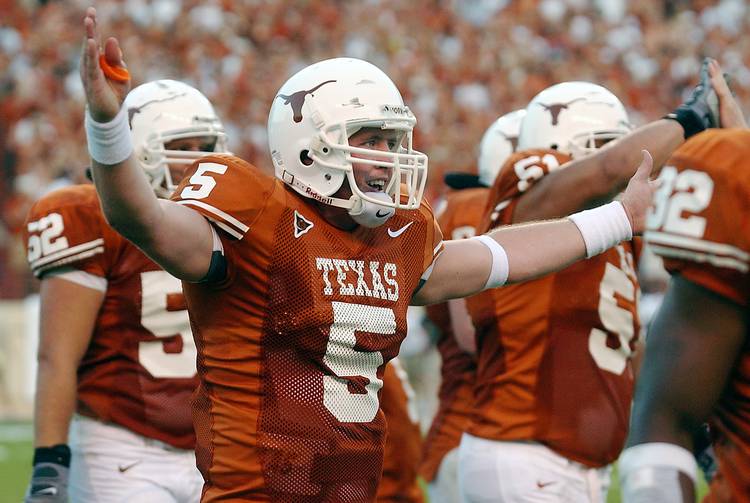 Chance Mock wasn’t having a particularly good scrimmage eight days ago. He was throwing too high. Or too low. In general, he was feeling lethargic from a hot August spent securing his spot as the starting quarterback for the Texas Longhorns.

To compound matters, he hurt his right hand on an offensive lineman’s helmet while following through on a pass. Coach Mack Brown, fearing Mock had bruised or broken his thumb, waved the quarterback to the bench. “I wanted him to sit there and ice it, ” Brown said.

“Absolutely not, ” Mock replied, shaking his thumb for several seconds before returning to the huddle. The stinging in his hand made Mock so angry with himself that he completed five passes in a row to end the scrimmage with a touchdown drive and an exclamation point.

Trainers did make him sit three days later, when he was sick with a stomach virus. He took two bags of intravenous fluids but wanted to practice anyway. “They finally told me to shut up and stop arguing with them, ” said Mock, who missed only that day before returning to workouts for Wednesday’s scrimmage.

Longhorn fans, this is your new quarterback, the guy who will lead fifth-ranked Texas when it opens the season against New Mexico State a week from tonight at Royal-Memorial Stadium.

On the field, the 6-foot-2-inch, 215-pound Mock obviously is hard-headed when it comes to taking the football out of his hands. Coaches have had to forbid him to lower his shoulder at the end of runs to punish the tackler.

Off the field, he lives to be a good ol’ country boy. Mock, the first Lone Star native to start at quarterback for the Longhorns since 1997, describes himself as stereotypically Texan. He drives a green pickup truck, complete with two dogs in the back and a bumper sticker that says “American by Birth, Texan by the Grace of God.”

“He likes to hunt, he dips, he fishes, and he wears a John Deere hat, ” said wide receiver Roy Williams. “And they want to call me different.”

Mock also is feisty, intelligent, eclectic, gregarious — and extraordinarily popular with his teammates.

“He’s just got this aura about him, ” said tight end Bo Scaife.

“He plays with such passion and emotion, ” said fullback Brock Edwards. “The way he plays inspires me. When he talks and tries to throw down with a linebacker, that gets me going. It gets the morale of the whole team going.”

Mock has shown such grit in workouts that he’s drawn comparisons to a young Brett Favre, the Green Bay Packers quarterback and Mississippi country boy known for his swagger, playmaking and strong arm.

“He’s probably got some Brett Favre in him, ” said Greg Davis, Texas’ offensive coordinator. “He’s a tough guy who loves the contact.”

He’s also shown patience, waiting three years to take for Major Applewhite and Chris Simms, who closed out their often-controversial careers last year. Now a junior, Mock was redshirted his freshman year, allowing him to learn the Texas offense without losing a year of eligibility, a slow progression that stands in contrast to Applewhite and Simms. Both of them played as freshmen because of a lack of experienced depth at the position.

“Chance is the only quarterback we’ve had who’s been able to sit and soak and learn, ” Davis said. “He got to sit in on the game plans. He got to travel. So now he has that confidence and poise because he’s had the time to develop it.”

Mock has thrown only nine passes the past two seasons. He was so anxious to get on the field two years ago as a redshirt freshman that he talked the coaches into letting him play wide receiver against Baylor, but only after the Longhorns were well on their way to a 49-10 victory.

Mock came to Texas with an extensive high school resume from The Woodlands, north of Houston. In 2000, when Mock signed with the Longhorns after spurning childhood favorites Texas A&M and Texas Tech (where his father was a star linebacker, then later the team’s strength coach), he was considered among the top five quarterback prospects in the country. He also earned a spot on the prestigious Parade magazine All-America team.

For the first time in three years, Texas has no quarterback controversy. Longhorn coaches have made it clear that Mock will be the starter, and he’ll be backed up by Vince Young, a redshirt freshman who was one of the most coveted high school prospects in the country in 2002.

Applewhite, now a graduate assistant coach who has worked with the Texas offense since the spring, said no one asks him anymore about a player or, more specifically, who should start at quarterback.

The lack of pressure has allowed Mock to be himself. When he’s not on the field, he’s probably out hunting with Edwards, whose father owns land near Burnet. Mock plays with his puppies, a bloodhound named Lady Bird and a Great Dane who goes by Lucy.

Or when he’s home in his apartment in South Austin, he’ll turn on the television. His taste in shows can only be described as diverse. He watches political shows with hosts ranging from the conservative Bill O’Reilly to the liberal-leaning Chris Matthews. He loves anything playing on the Discovery or History channels. Yet he also can discuss the nuances of “SpongeBob SquarePants” or the plotlines for “Lizzie McGuire.” His favorite musician is not a country-western singer but Nelly Furtado.

With all the talent around him — he has a running back coming off consecutive 1,000-yard seasons and a receiving group ranked as the best in the country — Mock knows he needs to be an offensive conduit, not a star for the Longhorns to win.

“My dream is to beat everybody by 50 to 60 points and make ’em wish they hadn’t played Texas.”

FROM THE ARCHIVES: Big question: T.J., how do you do it?