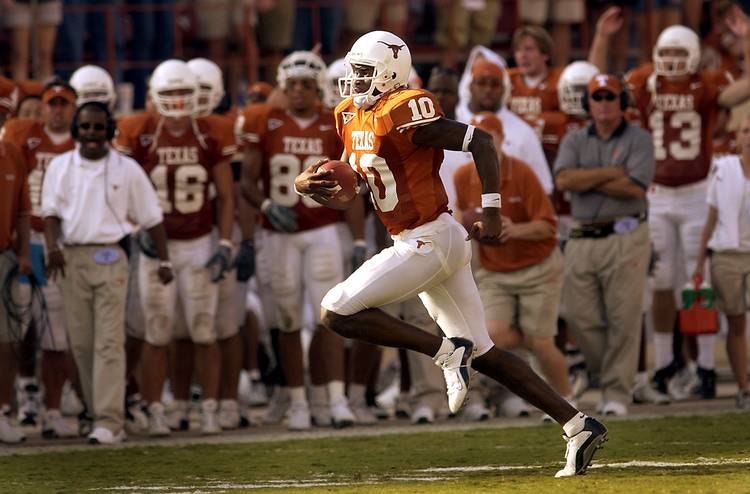 10/4/03 Ralph Barrera AMERICAN-STATESMAN; Texas' QB Vince Young kept the Horns in the game with his adept running for sizable yardage with each carry. Here he eludes KState defenders down the sideline for a first down and big gain during third quarter action.TB Cedric Benson fumbled on the series to end their drive. Texas had to come from behind against a tough Kansas St. team to earn their first Big 12 hame of the year 24-20 at Darrell K. Royal Memorial Stadium Saturday afternoon Oct. 4, 2003.

LAWRENCE, Kan. — Vince Young froze. He considered the question, contemplated for a moment and finally sighed.

Yes, he has been nervous before. Several times.

Like when his mother ordered him not to go outside or she told him to take a book to school. When he didn’t obey, oh yeah, he grew big-time nervous as he awaited his punishment.

It was hard to say whether the devil or Felicia Young — or just his own uncanny natural ability — made Vince Young do it Saturday. Whatever the source of inspiration, he exuded remarkable poise under the tensest of circumstances and calmly lifted his bedraggled Longhorns to a last-second, 27-23 victory over upstart Kansas.

Forget that Texas was playing the last-place team in the Big 12 North, the only team not still in the running for the divisional title. That Kansas team never showed up. Texas barely did.

Thanks mostly to Young’s herculean plays, the Longhorns dodged the gallant Jayhawks with a pair of touchdowns in the final four-plus minutes to avoid the most disastrous loss in Mack Brown’s seven-year era. The victory also kept intact all things blissful in what continues to be a spectacular season. Other than that, nothing was on the line.

Vince Young just wouldn’t let an 8-1 season and a No. 6 national ranking collapse around the Longhorns’ ears on a chilly, overcast afternoon in the Midwest.

He refused to allow Texas to spiral downward from a likely BCS spot to a berth in the lower-tier Alamo Bowl. If those other contestants scrapping for a Bowl Championship Series bid are counting on a Texas loss, then they’re drawing on 16.

Whether it’s trailing 19th-ranked Oklahoma State by 28 points a week ago or falling behind a three-win Kansas team by 10 with fewer than eight minutes to play Saturday, Texas gets it done. Bean-counters aren’t this ruthlessly efficient.

“We didn’t want to be like A&M and lose to a team that didn’t have as much talent as we do, ” tight end Bo Scaife said. “Vince just took it on his shoulders.”

Playing opportunistic defense, impressive linebacker Nick Reid and the Jayhawks were pushed around all day between the 20s, but they mostly held their ground near the goal line. Still, they couldn’t get between Young’s ears. The guy is unshakable. He’s so steady under duress, he’s like headlights on the deer.

“The guy’s a freak, ” teammate Cedric Benson said. “He was amazing. I think this was a championship performance.”

Young scored on an 18-yard touchdown run to reduce the deficit to three. Then on the game-winning drive, he scrambled for 22 yards and a crucial first down on a fourth-and-18. Four plays later, he threaded a perfect pass off a rollout to Tony Jeffery. And the game still had 11 seconds to go.

But none greater than Young. Offensive coordinator Greg Davis can call the plays, but Young calls on something deeper.

“The Good Lord gave him that talent, ” Davis marveled.

Young often giveth and taketh away, and he did both Saturday. He threw two interceptions — doesn’t he always? — but Kansas worked them for only a field goal. That’s standard procedure for the third-year sophomore, who is such a gifted athlete that he makes everything look so effortless. He’s Velvet Vince.

Maybe this is the kind of quarterback he will always be. An erratic, inconsistent sort marked by spurts of brilliance and an overriding unflappability. Or maybe he only needs seasoning.

He’s the best running quarterback these eyes have ever seen. He has a strength about him, both physically and internally, that props him up and wards off linebackers and critics.

“I’m just growing up and learning, ” Young said. “Whether it’s (idol) Steve McNair or the coaches, they’ve put a lot on my plate, and I’m just eating it right now.”

Young entered the final road game of the season marked still as a quarterback experiment, ranked as the No. 12 passer in a 12-team league but also the Big 12’s No. 10 rusher. He left it as a full-fledged hero.

He even calmed his coach before the final touchdown drive and urged him to relax.

Pull out any yardstick you like. This 6-foot-6-inch quarterback grew up a little more Saturday when the temperature was in the 40s and the season was on the line.

Between drives on which he ran for 66 yards and hit seven of 12 passes for another 76 yards, he sat on the bench, blood seeping from his fingers where the skin was cracked by the raw cold.

Young may already be the most electrifying player in college football, outfitted with a strong arm, an unflinchable calm and the best legs in the game.

The cape is optional.