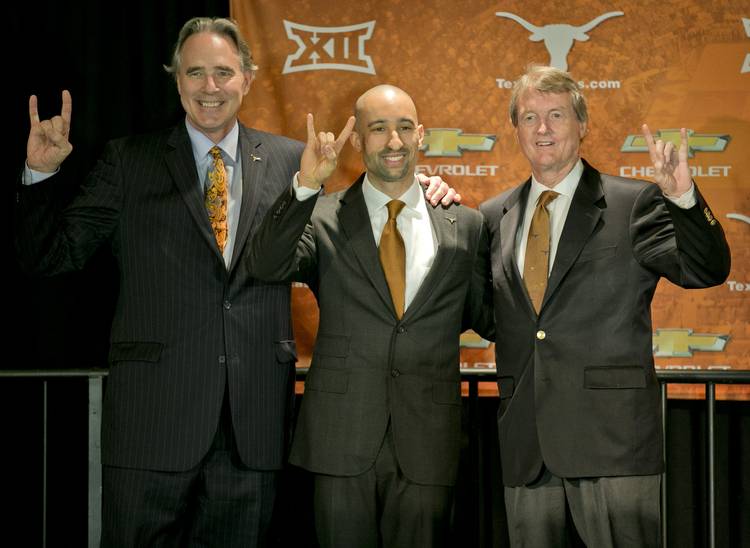 Shaka Smart, middle, is introduced as the new basketball coach at the University of Texas by Athletic Director Steve Patterson, left, and President Bill Powers on Friday April 3, 2015, at the Frank Erwin Center. JAY JANNER / AMERICAN-STATESMAN

Shaka Smart has had plenty of chances to leave Virginia Commonwealth and always turned them down flat.

Marquette made a decent push. UCLA came close. Minnesota and Southern California were once rumored to be after him. School officials always broke the bank to keep Smart, their biggest star on a campus without college football.

So why pick Texas? Why now? Why leave VCU when Smart proved in 2011 you can reach the Final Four from sleepy Richmond, Va.?

“To be honest, I didn’t know if I would ever leave VCU,” Smart, 37, said Friday. “It really took a world-class institution, a world-class athletics program and a phenomenal place to convince my daughter, my wife and (me) to make this move.

“There’s only one University of Texas. From a long way away, I can see that loud and clear.”

Smart was formally introduced as the 24th men’s basketball coach in Longhorns history. Looking cool, confident and speaking at length at times without any prepared notes, Smart promised that fans will see an exciting style of play that could energize the equally sleepy Erwin Center.

“I cannot think of a better person to lead us into the future in men’s basketball than Coach Smart,” said UT President Bill Powers, who approved a sizable offer by Athletic Director Steve Patterson.

Smart will receive a seven-year contract, with six years guaranteed, and a base salary of $2.75 million that escalates over time. Per state law, the contract must be formally approved by the UT System Board of Regents.

Patterson said Smart was the only person he interviewed. “You need to be aware of the talent that’s available,” he said. “But Shaka’s who we started on. He’s the only one we talked to. We’re glad to have him.”

Patterson said UT will pay Smart’s $500,000 buyout with VCU. Texas also must play a home-and-home series with VCU, according to Smart’s VCU contract, or pay another $250,000.

Smart is known for his “Havoc” defense, a full-court pressing style that leads to run-outs and up-tempo offensive sets. Multiple times on Friday, he used the word “exciting” to describe how the Horns would play. He posted a 163-56 record in six seasons at VCU.

Texas center Prince Ibeh said,”If he interprets that style here, then that’s fine. I feel we’ll adapt. Whichever direction he decides to use, I’ll be comfortable with that.”

But can that pressure-packed style work in the rugged Big 12? Smart’s VCU team knocked off Kansas to win the 2011 Southwest Regional and advance to the Final Four.

“It translated pretty well a few years ago in San Antonio,” Smart said, drawing oohs from the crowd. The comment took off immediately online as a shot across Kansas’ bow.

Smart embraced former Horns like Reggie Freeman, Kris Clack and Chico Vazquez. He told them he wants former players around the program and asked for their phone numbers. Smart left for a tour of Austin with his wife, Maya, and daughter, Zora, 3.

Smart said Associate Athletic Director Arthur Johnson promised the school would fly the Smart family back to Richmond after the news conference was over.