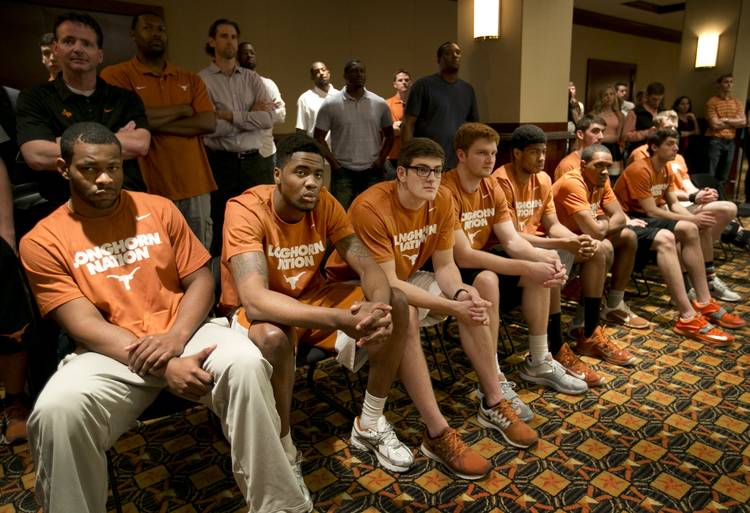 UT basketball players listen as their new head coach, Shaka Smart, is introduced at the University of Texas on Friday April 3, 2015, at the Frank Erwin Center. JAY JANNER / AMERICAN-STATESMAN

New coaches always want to dive right into recruiting, using the initial euphoria to round up some new players. Texas coach Shaka Smart’s first priority should be to impress Isaiah Taylor.

Two sources inside the Texas basketball program said they believe Taylor is strongly considering going into the NBA draft this summer.

Even former Longhorns star Reggie Freeman, who talks to Taylor frequently, said the sophomore is thinking hard about it.

“He might be leaning, in my opinion,” Freeman said Friday after Smart’s introductory news conference.

“Just by the way the season ended, that makes him want to leave,” Freeman said. “And his relationship with Rick (Barnes). In my opinion, he should stay. This is going to be a whole other way of playing that he will excel at because of how this coach plays.”

Texas Athletic Director Steve Patterson has lamented how agents do more harm than good. Taylor might be convinced he’s an NBA-caliber guard, but he shot 28.2 percent from 3-point range this season. That’s good enough to be the 293rd-best 3-point shooter in the NBA.

Taylor was one of a handful of players who did not attend Smart’s news conference Friday. Several had already left town for Easter weekend, a team spokesman said.

“We’re kind of giving him his space and his time so he can make the best decision for him and his family,” center Prince Ibeh said. “We’ll be behind him, whatever decision he makes.”

With or without Taylor, Smart promises to deliver a much more exciting brand of basketball than former coach Rick Barnes did. The Horns are likely to give themselves more chances to score by taking a boatload of shots.

VCU consistently averaged in the low 70s in scoring, as did Texas. The Rams weren’t the best shooting team around, but they kept putting it up.

Defense and rebounding weren’t Texas’ problems last season. The Horns led the nation in blocks and had the best 2-point field-goal percentage defense in Division I. As for the other end — oh, dear. The Longhorn Foundation should give ticket holders bonus loyalty points.

Former Texas guard Kris Clack said he liked how Smart has already stressed the importance of getting the ball inside to Ibeh and center Cam Ridley.

Barnes stressed that, too. But guards wouldn’t get the ball in to the post, and plenty of times Ibeh, Ridley and departing freshman Myles Turner didn’t demand it. Too many times to count, players were standing around waiting for someone else to make things happen.

“We have a big, big front line, and I’d like to see the guys use that inside talent that we have so we’re not relying on the guards so much,” Clack said.

Freeman played for coach Tom Penders from 1994 to 1997, when the team was known as the “Runnin’ Horns” and routinely scored 80 or 90 points. It’s a different era now, and college athletes are simply poor shooters. National pundits grouse that the game itself has become painfully bad.

But perhaps with Smart at the controls, Texas will be more up-tempo. It’s time the Erwin Center was exciting again. Fans are accepting of DJ Mel, T-shirt cannons and free Pluckers coupons on the way out. But what brings them back? It’s all about the winning and losing.

“You can use these guys’ athleticism a little more than what’s been used in recent years,” Freeman said. “They need that here. Everything was kind of dull. These guys can play. I’ve been to the practices. They just need to be freed up a little more. When you have a hold on them, it’s tough to see what they can really do.”

Smart working to fill out his coaching staff