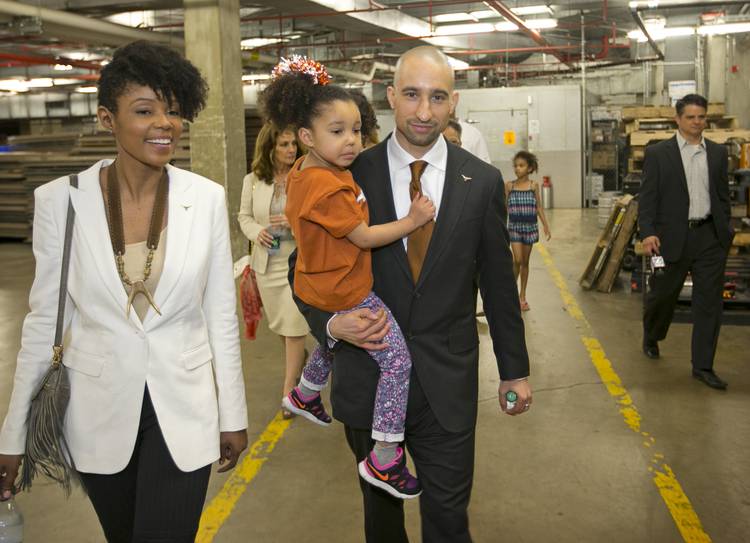 Shaka Smart, walks away with his wife, Maya, and daughter Zora, after he was introduced as the new basketball coach at the University of Texas on Friday April 3, 2015, at the Frank Erwin Center. JAY JANNER / AMERICAN-STATESMAN

RICHMOND, Va. — Virginia Commonwealth University does not have a football program, an understandable fact considering it has medical school roots dating to 1838. Thanks to Shaka Smart, it might never get one.

Football, doctors claim, is hazardous to your health. Kind of like smoking. Whether they’ll tell you that in Richmond, home of one of the world’s biggest cigarette conglomerates and the lowest cigarette tax rate in America, is hazy.

Asked if he ever wanted football on campus, former VCU President Eugene Trani once famously said,”Not on my watch.”

So VCU officials decided men’s basketball would be the crown jewel, one that’s now 41 years old. The program turned heads under Jeff Capel about a decade ago, and Anthony Grant made the NCAA Tournament twice in three years. Both men parlayed that success into big contracts at big-name football schools. Both were eventually fired.

On both occasions,”This community thought the sky was falling,” said Stuart Siegel, a major VCU contributor who was once the S in S&K Menswear and served two eight-year stints on the school’s Board of Visitors.

“If you know Anthony Grant, he’s an Adonis,” Siegel said. “He looks like he stepped out of GQ. He’s built and has a presence about him. And here comes this wormy guy from Florida, and people worried about what’s about to happen.

“It didn’t take people long to realize he was something special,” Siegel added.

So what happened to the wormy bald guy with a perpetual hint of a goatee, the one who grew up in Wisconsin trying to emulate Magic Johnson’s moves, the one who got accepted by Harvard but skipped it to play Division III basketball, the one who smashed the school’s assists records, who went straight into college coaching and landed the VCU job by age 32, the one who married a Harvard grad (and together they became a power couple in the Commonwealth), and the one who is now the 38-year-old head coach at Texas?

Shaka Smart did what sounds unthinkable. By creating “Havoc,” giving VCU an identity and guiding the 11th-seeded Rams to the 2011 Final Four, Smart got people to forget all about football.

“Once Shaka and the team made the Final Four run, you just didn’t hear much about football anymore,” said David Boardman, another VCU donor.

VCU now plays its home games in the Siegel Center, a $30 million facility dug out of the ground featuring what feels like a low-hanging roof that amplifies noise. VCU has sold out 66 consecutive games at the 7,637-seat venue. The Erwin Center is literally twice that size. Another $25 million was raised to build a new practice facility, set to open in September.

The man most responsible for VCU’s growth? He’s now gone. Off to a football school, just like Capel and Grant before him.

Darius Theus, one of Smart’s VCU players, has a simple message for Texas.

“You stole the heart of Richmond,” Theus said.

By now, most Longhorns fans are well aware Smart compiled a 163-56 record in six years at VCU. They know Smart’s Rams beat the seemingly unbeatable (for Texas, anyway) Kansas Jayhawks in 2011 to reach the Final Four.

There’s still this nagging question: How did someone just 38 years old put himself in a position to get the Texas job?

Smart was raised by his mother, Monica King, after his father essentially abandoned the family. Took off one day and just never came back. It’s thought this is a major reason Smart believes he must be a father figure to his players today.

Nine players on last season’s VCU team grew up without an active father figure in their lives.

“He always brought me into his office once a week, and he told me to be uncommon,” said David Hinton, a former VCU walk-on who now works for the Department of Homeland Security. “I never knew what he was talking about. He said, â€˜I want you to be uncommon. It’s a daily decision.’ I never got it until my junior or senior year. He wants you to be different.”

The second major component of Smart’s narrative is what happened after his freshman year at Kenyon College, the Division III school in Gambier, Ohio. Smart viewed coach Bill Brown as his father figure. Then Brown left for another job.

The two stayed in touch, and Brown eventually gave Smart his first coaching job, as director of operations at California University of Pennsylvania. The lesson learned, Brown said, is that every coach will have a family of players who should be treated like sons. But movement is part of the coaching business.

“Along the way, the only thing you can do is try to equip them with life skills so they can be successful,” Brown said.

Smart’s players at Texas will come to understand his singular core value: relationships.

Smart is a relentless text messenger, capable of having multiple conversation threads going at once. “If you called him at 5:30, and he misses your call, he’ll call you back at 5:32,” Theus said. But above all else, Smart wants players to come by the office. How’s your mom? How’s your sister? How’s school going? It’s relentless, his VCU players said.

During an interview with the American-Statesman, Smart said,”These guys are 18, 19, 20, 21 years old. They’re in the formative years of their life. They certainly can benefit from guidance and mentoring, and I think that’s a big part of our job.”

Don’t tell them how to do something. Show them. That’s why Smart gets on the floor at practice, dives after loose balls, takes charges and wins over the players. Forget the Xs and Os. This may be Smart’s secret strategy, Theus said.

“You don’t meet a lot of coaches who stick around the office, ones who will rebound for you,” Theus said. “I don’t think coach Smart has an ounce of bullshit in him.”

There’s no BS when it comes to the Navy SEAL training Smart put everyone through in previous Septembers, either.

“Get them up early, get them wet, get this shivering,” said John McGuire, who runs SEAL Team Physical Training Inc., based in Richmond. He’s probably headed to Austin soon. “By the time we get done with them, they get comfortable being uncomfortable.”

VCU has landed one McDonald’s All-American in school history, and that kid grew up in Richmond and wanted to stay home. By comparison, Texas has signed 16.

Treveon Graham had just two scholarship offers as a recruit: VCU and Cleveland State. Briante Weber had just one (VCU). Together, those two seniors won 108 games the past four years under Smart. Jon Holmes, Texas’ lone senior last season, won 80 games in his four years with the Horns.

VCU has made five straight NCAA appearances, a claim no other Virginia school can make.

“It took three years but took only one player to change it around – me,” said Weber, VCU’s go-go energizer. He suffered a knee injury as a senior and finished 12 steals shy of setting a Division I record.

Sitting across from him during a one-on-one interview, it’s clear Smart is sizing you up. He rarely smiles, speaks in measured tones and hates — capital letters seem appropriate here, HATES — talking about himself.

“I really don’t have any hobbies,” Smart said. “I’m a pretty boring guy.”

Smart is a voracious reader, as you might expect from a history major who was good enough for the Ivy League. He was selected to introduce President Barack Obama at a VCU speaking engagement during the 2012 election cycle. Spike Lee, no intellectual lightweight, is VCU’s biggest fan.

Smart even reads VCU’s game notes handed out to reporters. Well, read is subjective. More like he copy edits them, said VCU sports information director Scott Day. “Literally for half an hour, he talks to me about the difference between passive and aggressive verbs,” Day said, recalling a summer trip to Italy. Texas SID Scott McConnell, you’ve been warned.

When the news broke that Smart was leaving, some VCU athletes didn’t take it too well. “My couch has been pretty occupied the last couple of weeks,” Hiort-Wright said.

Smart clearly thinks differently. His VCU office had a desk, room for four chairs and not much else. The white board was so small, he had painters cover the doors in white erase board paint so he could write on them. As of Thursday, all of Smart’s scribbles were still there. It looks like Greek to outsiders, but visually, think about Russell Crowe’s character in “A Beautiful Mind.”

“You can’t go in there and try to fool him,” Hinton said. “He’s two steps ahead of you.”

Texas Athletic Director Steve Patterson might not have realized he hired Maya Smart and got Shaka as a bonus.

Maya Smart, a 34-year-old from Akron, Ohio, is every bit as impressive as her husband. She’s arguably the main reason Smart went from VCU basketball coach to Virginia supernova.

The Harvard graduate got a master’s degree in journalism from Northwestern and became an accomplished writer with her own blog. She serves on various boards around Richmond, including one for the James River Writers Association and the YWCA.

“One of the refreshing things about Maya was that she’s never afraid to ask a question, a tough question,” said Frazier Millner Armstrong, the YWCA board president.

“I can never say thank you enough,” said David Young, the Friends Association’s executive director. “I have racked my brain trying to come up with ways to thank them and recognize them.”

During the T-shirt fund-raiser, VCU grad Timmy Nguyen saw the Smart brand’s power. While he was selling shirts, nobody really responded. When he mentioned Maya and Shaka,”They said, ‘Absolutely!’ That’s how much their name means in the community,” Nguyen said.

Maya also received a major honor in December, when she was named the Richmond Christmas Mother, a position that oversees the annual campaign to help nonprofits during the holidays.

The local media didn’t make a big fuss, but Maya was the youngest black female ever to be named to the position in the so-called Capital of the Confederacy. It was a huge moment, just as it was for Shaka to be the first black men’s basketball coach in Texas history.

The Smarts are comfortable eating soul food at Mama J’s, where a two-piece catfish plate is $9, or savoring the cuisine at the Roosevelt. One local magazine, Style Weekly, named the couple to its Top 40 Under 40 list for 2014. Shaka posed for posters for a literacy campaign. There was a life-size cardboard cutout of him encouraging people to be organ donors at the Department of Motor Vehicles, of all places.

Texas stole the heart of Richmond, all right. VCU offered Shaka a $1 million raise to stay, something he won’t deny.

“I won’t deny it either,” VCU Athletic Director Ed McLaughlin said. “He’s not someone who’s driven by money, and it’s not a money issue.”

Texas was simply a chance for professional growth. He gave VCU six good years, multiple supporters said. They all wish him well.

“It hurt,” said Dianne Long, who has worked inside the VCU men’s basketball program for three decades. Her eyes turned red, and Long struggled to hold back tears just thinking about Shaka being gone.

“It hurts when the good ones leave, and he was a good one,” she said.

Will Smart bring ‘Havoc’ to Horns?