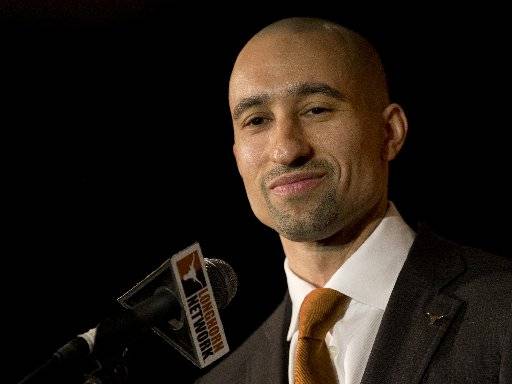 New Texas coach Shaka Smart loves to get on the floor and practice with the players. But Smart jokes that he needs to get into better shape.

As a 38-year-old, Shaka Smart should have boundless energy. While the season is still months away, Texas basketball fans expect their leader to take charges, dive for loose balls and generally create, um, havoc.

“I need to get back in shape,” Smart said Monday during an hourlong gathering with reporters.

“When I got here, transitions are hard on you that way, because you’re running around and not eating particularly well.”

Wearing a Longhorns T-shirt and comfortable, baggy khaki shorts, Smart looks like someone who doesn’t leave the office much, save for the occasional recruiting trip.

So what’s this team going to look like come November? Well, he’s not exactly sure yet.

Persuading point guard Isaiah Taylor to return was a major coup. Taylor, Demarcus Holland, Kendal Yancy and Javan Felix make up a solid, experienced backcourt. Those players, along with incoming guards Kerwin Roach and Eric Davis, give Smart plenty to work with.

But how will Smart’s up-tempo style work for Cam Ridley and Prince Ibeh, two big men known more for their defensive prowess around the rim? What about Connor Lammert, a 6-foot-9 forward comfortable on the 3-point line? Can Shaquille Cleare, a 6-8 forward who sat out after transferring, simply keep up?

“I’d be dishonest if I told you I know exactly how we’re going to play next year,” Smart said. “I have a pretty good idea of what I think we can do on defense. But we got to get the guys on the floor and see how well they’re able to do those things.”

At this point, Smart said his coaching staff is learning about the players “as people first.” The head coach is promoting a concept called “teamship,” in which players align themselves with team goals.

Some clear points have already emerged, though. Smart quickly picked up on something former coach Rick Barnes raved about: The current players truly like one another.

As for who has stood out for defensive aggression, Smart said,”Demarcus Holland, I would say, has stood out in that regard here so far.” As the team’s best defensive player, he should.

Ibeh will be a terrific fit,”if we can get him to play with the activity and the motor that we want him to,” Smart said.

Backup guard Jordan Barnett was practically buried by the previous coaching staff. “Right now, I think he can be better than he thinks he can be,” Smart said.

And Roach? “When he gets here, he’ll immediately be one of the more confident guys on the floor.”

Texas will open the season against Washington in China. Then it’s back home to wash clothes, repack and take off for a Thanksgiving trip to the Bahamas. Even by then, Smart doesn’t expect to have all the answers.

“I’ll know more a month from now. I’ll know a lot more by the end of the summer,” Smart said. “We’ll know more each step of the way. By the time we get back from China, we’ll have one game under our belt, but it’s not like we’ll have it all figured out.”

Smart’s base package is a six-year guaranteed deal worth approximately $3 million annually. A seventh year at $3.4 million is included in the contract, but it’s not guaranteed. He receives all the basic perks included in Texas coaches’ contracts and can earn an additional $550,000 by hitting all available bonuses.

Texas officials must pay Virginia Commonwealth a $500,000 fee to buy out Smart’s contract there.

Also, the Longhorns will play the Rams in a home-and-home series or pay $250,000. Smart said in previous years schools have honored that requirement by playing three to four years down the road.

Texas officials back off ‘Havoc,’ a hallmark for Smart

Horns not holding back with upcoming schedule