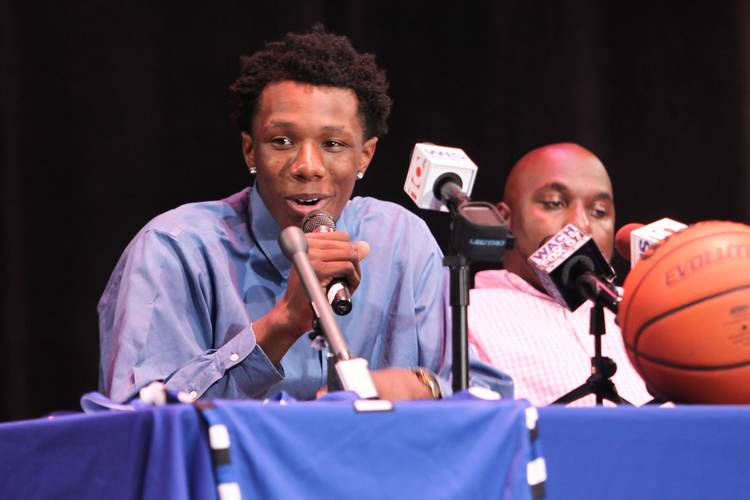 Shaka Smart thought Tevin Mack was good enough to play at Virginia Commonwealth. Now, the 6-foot-6-inch forward is following Smart to Austin. The Columbia, S.C., native announced Tuesday that he’ll be a Longhorn this fall.

“I heard reports he was going to leave, and I didn’t think too much of it because I hear he’s going to leave every year,” Mack said after a lightning-quick announcement ceremony by recruiting standards. Smart’s first signee plans to enroll in summer school and will be on campus in June.

“I didn’t really believe it at first,” Mack added,”but once I got released, he told me he wanted me to come with him.”

The recruiting website 247sports considers Mack the ninth-best small forward in the nation and the 54th-best player overall.

After VCU released him from his letter of intent, Mack made it clear he wanted to visit other schools. He visited Georgia the weekend of May 2 and then followed that with a trip to Austin.

On his recruiting visit, Mack met football coach Charlie Strong and watched Smart throw out the first pitch at a UT softball game.

“I know that I can come in and get minutes as long as I work hard and do what I’m supposed to do,” Mack said. “I should be able to play some minutes right away, hopefully. And be able to contribute to this team.”

The Longhorns have two scholarship spots available for the 2015-16 season, having lost senior Jon Holmes and freshman Myles Turner to the NBA draft.

The final scholarship slot could go unused this season. Smart and his staff are aggressively chasing recruits slotted for 2016 and 2017.

Last season, the Horns could have used another athletic scorer.

Texas finished eighth in the Big 12 in scoring (67.4 points) and seventh in shooting (43.3 percent). There were times the offense was painful to watch.

Things could look completely different as a result of Smart’s up-tempo style.

Kendal Yancy showed flashes at times last season, and Jordan Barnett was a prolific scorer in high school but never got out of former coach Rick Barnes’ doghouse. Adding Mack to the mix gives the Horns another threat.

Horns not holding back with upcoming schedule