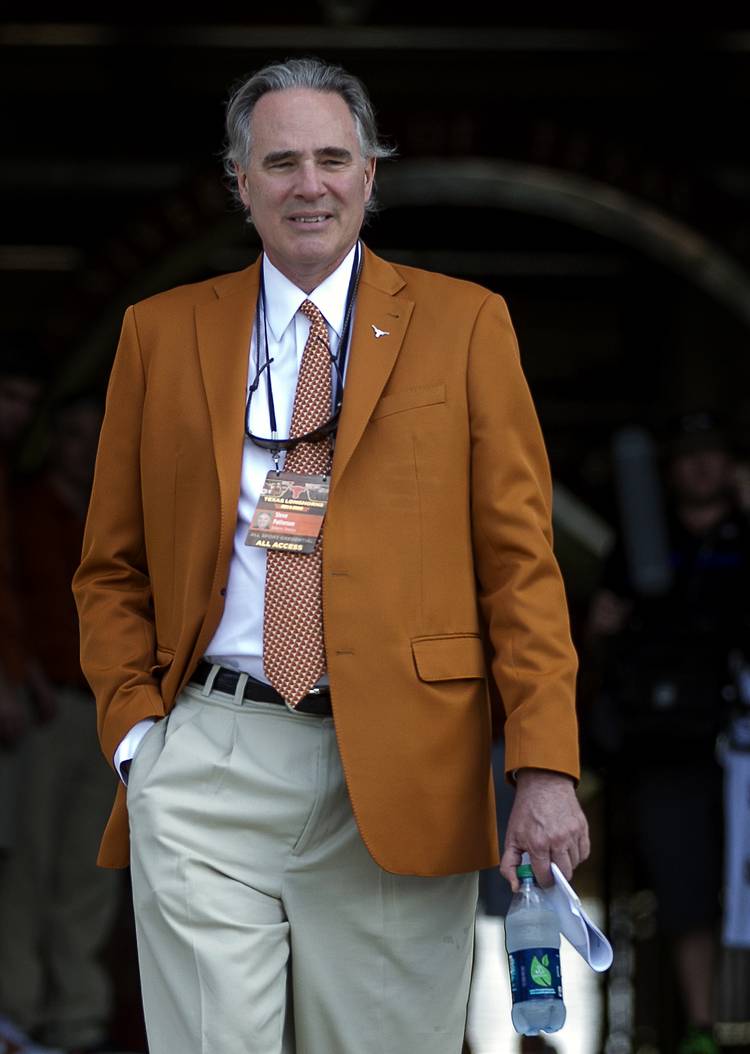 Despite the angst over Steve Patterson’s methods, people appear to be supporting him with their wallets.

In the last 17 months, the Texas men’s athletic director has inked numerous business deals that should boost bottom-line revenue totals. And despite the are-you-kidding-me ticket increases, fans are still buying in.

“Of all the business moves Steve Patterson has made, I can’t find fault with any of them,” said Charles Matthews, chairman of the Texas Exes.

The American-Statesman reported Wednesday that Patterson and UT President Gregory L. Fenves may not be on the same page. Fenves released a statement Wednesday saying he was “aware of the frustrations of some of our Longhorn fans.”

Patterson’s business acumen does not appear to be the source of friction with Fenves. It’s how the AD goes about getting things done, sources said. One even called Patterson “a bull in a china shop.”

Patterson insists all the extra money generated by the business deals and higher ticket prices gets redirected back into the school’s 20 athletic programs. He professes a desire to “create an environment of excellence so we can have championship performance.”

Texas had a net loss of $8.1 million during the 2013-14 fiscal year, when factoring in debt service payments and facility projects. It was the first time the school lost money since the 1999-2000 fiscal year.

Top athletic department officials believe all of the new deals signed under Patterson’s watch will have significant long-term financial benefits.

In March, the Horns announced a 10-year partnership with 289c Apparel, a licensing company owned by Dallas Cowboys owner Jerry Jones. Multiple sources told the American-Statesman that Texas is close to finalizing a long-term deal with Nike.

Michigan officials released a term sheet on Wednesday that spells out what currently stands as the biggest deal in collegiate sports – a cash-and-apparel combination worth $169 million over 15 years.

The sources said that Texas’ new deal is expected to top what Michigan received. The Horns have sold the most merchandise the last nine consecutive years.

Texas earns a fraction of the sale of every officially-licensed T-shirt, hat and coffee mug sold anywhere. The school reported making almost $32 million in licensing royalties, advertising and sponsorships during the 2013-14 fiscal year.

The gameday atmosphere could be completely different this fall. The athletic department will earn 39 percent of the net revenue generated by Tailgate Guys, the Alabama-based company selling premium tailgating spots outside the stadium.

Patterson has said he expects to net another $500,000 when beer and wine sales begin inside Royal-Memorial Stadium this fall. Last year, Texas earned about $2.5 million in football concession stand sales.

And there’s the season ticket totals.

In March, the school announced that football season tickets would be increased an average of 6 percent. The real figure is 5.8 percent, athletic department officials said, but was rounded up. Basketball tickets were also increased approximately 7 percent at the Erwin Center.

In mid-June, the Statesman reported that Texas had seen a 92.3 percent renewal rate for football season tickets. That includes more than 3,000 new tickets purchased through the university’s Ticket Relocation and Upgrade Experience system.

When all the receipts were counted for the 2013-14 fiscal year, Texas raked in more than $34 million off football tickets.

The Horns have signed a seven-year contract with the Austin Radio Network to move all sporting events to a new flagship station in Austin. Bob Cole, general manager at 104.9 The Horn in Austin, has said his cost will be approximately $1 million annually.

All of this comes at a time when Texas, along with other schools, face increased expenses. UT must pay its athletes an extra $5,750 annually to adhere to new regulations on full cost of attendance. That figure is determined by a formula set by the U.S. Department of Education.

Athletes appear to be the only ones getting a free lunch, though. All athletic department staff members now receive 30 free meals in the dining hall annually as Patterson implemented caps.