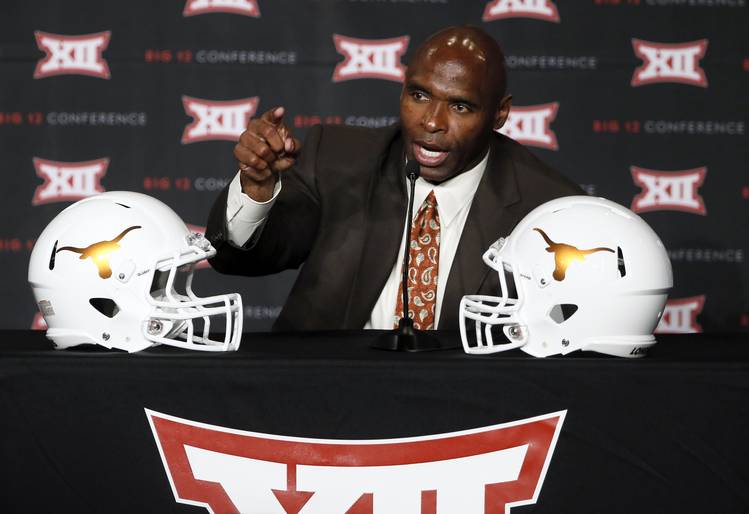 DALLAS — It probably says something about the state of Texas football when the biggest news at Big 12 media days concerned Daje Johnson’s rapping skills.

Laughing about Johnson’s Internet single that leaked this month sure beats talking about being picked to finish fifth in the conference. It takes your mind off the fact Texas was blown out 79-17 in the final two games of last year’s dismal 6-7 season.

“I said, ‘This is what they think of y’all,’ ” Strong said Tuesday. “I want them to understand what’s been said. It’s up around the locker room.”

Senior running back Johnathan Gray said: “People shouldn’t say that about Texas, and we shouldn’t allow that to be said. We have to prove everyone wrong.”

Where is the Texas program right now? Big 12 officials put Strong and his players in the same spot where cellar-dweller Kansas resided Monday – facing a wall inside the Omni Hotel. TCU, Baylor, Oklahoma and Oklahoma State all received prime setups in the gigantic ballroom.

Baylor coach Art Briles held court with an army of reporters. The back-to-back league champs were picked to finish second, which was just fine with him. “I appreciate all those second-place votes you gave me,” Briles said.

“Where we are is probably what we deserve,” Strong said of UT’s spot in the Big 12 preseason poll. “Until we play better, that’s where we’re going to be.”

Gray, cornerback Duke Thomas and center Taylor Doyle are part of a senior class that’s never experienced the thrill of a double-digit winning season. No one in the locker room knows how to win big. They simply know at Texas, that’s the expectation.

The questions surrounding quarterbacks Tyrone Swoopes and Jerrod Heard are significant. Swoopes will begin training camp as the starter,”but Jerrod is going to get every opportunity,” Strong said. “I’m not going to play musical chairs with them.”

“You know when you come here, you know what you’re getting yourself into,” said Thomas, the only UT player on the preseason All-Big 12 team.

“We have the responsibility to uphold a standard, and we haven’t been reaching that standard. We fell short (for) several years. That’s what we’re working toward.”

Gray said players were called individually to meet with Strong this past spring. When Gray walked into the conference room, the entire coaching staff sat there waiting for him. It was constructive dialogue. There should be little doubt about what’s expected this season.

“One player was in the hot seat,” Gray said. “You got the truth – answered from all the coaches.”

And the truth is, Texas simply needs to get better this fall.

“This team is highly motivated,” Doyle said. “No one’s happy about how this past season unfolded. Guys want to get back out there and prove themselves.”

Swoopes is No. 1 — for first practice