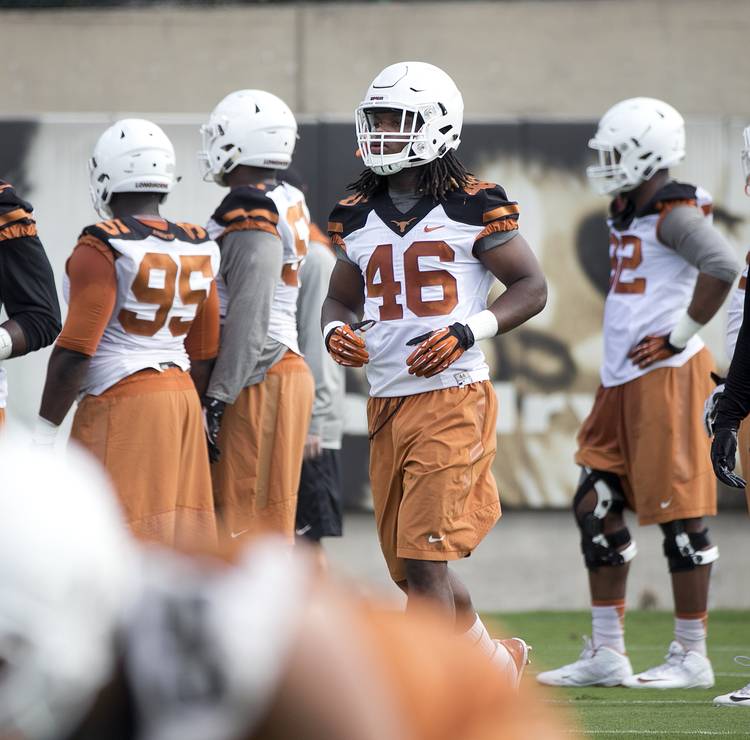 Five-star linebacker Malik Jefferson is not a typical Texas recruit. He’s allowed to speak to reporters.

Jefferson held court with the media Thursday, ending a long-standing policy that barred Longhorns freshmen from the interview room before they made their college debuts.

Jefferson, who enrolled in January and has increased his weight from 217 to 240 pounds, said he graded out at 53 in the spring game – worst among the team’s linebackers. The staff’s harsh assessment came as a surprise since Jefferson forced a fumble and made a tackle for loss.

“I had a lot of critical errors, a lot of little mistakes, ” he said. “It was the speed. I wasn’t used to it. I knew what I was doing, but I couldn’t react.”

That said, linebackers coach Brian Jean-Mary would not rule out Jefferson from starting with the first-team defense at Friday’s opening preseason practice.

Merrick on campus, but others on hold: Freshman quarterback Matthew Merrick has arrived for preseason camp, scrapping his previous plans to grayshirt and enroll in January. Two other freshmen, tight end Devonaire Clarington and offensive lineman Ronnie Major, have yet to qualify academically, and wide receiver Gilbert Johnson will not enroll at UT, Longhorns coach Charlie Strong said.

Lineman in trouble: Strong said reserve offensive lineman Terrell Cuney remains a part of the team after he was charged with shoplifting Wednesday afternoon.

Police apprehended Cuney, a redshirt freshman from Jasper, at 1030 Norwood Park Blvd., the location of a Walmart. The charge is a Class B misdemeanor, which carries a maximum penalty of 180 days in jail and a $2,000 fine.

No stealing is among Strong’s five core values, so it’s likely Cuney will face internal discipline if guilty.

Short yards: Heeding the advice of his legal counsel, Texas offensive coordinator Joe Wickline declined to answer questions about his ongoing lawsuit against Oklahoma State…. At one point or another, Texas had six 2015 commitments from the state of Florida. Three of them – wide receiver John Burt, linebacker Cecil Cherry and cornerback Davante Davis – will participate in preseason camp…. It sounds as if Strong’s staff will try freshman DeAndre McNeal at tight end and not wide receiver as previously thought. Before he committed to the Longhorns in December, McNeal said Strong had promised him the ball on the first play at Notre Dame…. Kicker Nick Rose said he practiced frequently in the summer with NFL veteran Phil Dawson, a former Longhorn. Dawson, who resides in Austin, is entering his 17th NFL season and his third with San Francisco…. Cornerbacks Sheroid Evans (knee) and Jermaine Roberts Jr. (knee) will be held out of practices indefinitely. Linebacker Dalton Santos (ankle), defensive tackle Desmond Jackson (foot) and tight end Blake Whitely (shoulder) will be limited…. Strong confirmed the addition of Australian punter Michael Dickson, who has been on campus for a week and is slated to start over Mitchell Becker.