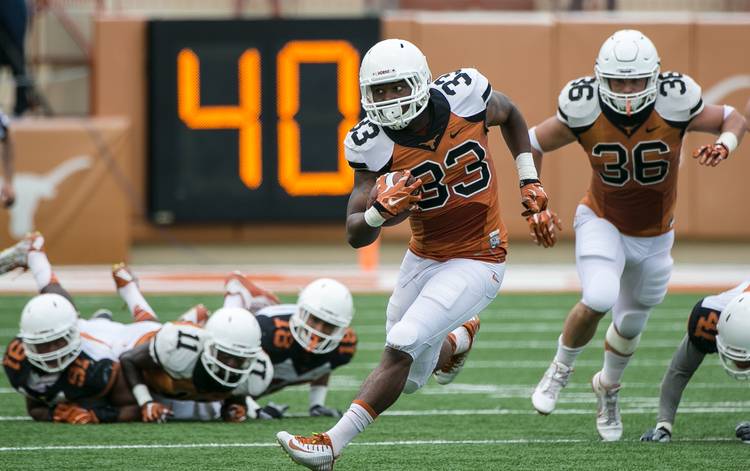 UT running back D'Onta Foreman (33) runs away from defenders during the Orange-White Scrimmage at Royal-Memorial Stadium in Austin on April 18, 2015. Lukas Keapproth/AMERICAN-STATESMAN

Johnathan Gray is the undisputed leader of the Texas offense. The senior needs only 546 rushing yards this season to rank among the top 10 running backs in school history.

And there’s incredible hype surrounding the bumper crop of freshmen.

Chris Warren was considered one of the nation’s top 10 running back recruits. Tristian Houston was an all-state pick. Kirk Johnson, whose father, Johnnie, was a two-time All-American at Texas in the late 1970s, is a literal Orangeblood.

D’Onta Foreman and Duke Catalon are still listed on the UT roster. Remember them? Those two should be more motivated than ever to secure backup spots or risk getting swept away in Texas’ youth movement.

“Everyone’s talking about the freshmen,” UT running backs coach Tommie Robinson said. “But D’Onta and Duke, they’re not going to lay down.”

Last season, Texas had Gray and Malcolm Brown in the backfield. Both qualified for hazard pay. Brown was crushed when his dream of a 1,000-yard season went to pieces as the offensive line fell apart. Still, he finished with 708 yards and landed in training camp with the St. Louis Rams.

Gray had 637 yards last season despite not being at full strength because of an Achilles injury suffered in 2013.

Foreman didn’t play much until the second half of the season. He got a few carries against Kansas State and West Virginia, for example, but nothing to write home about. Catalon redshirted. Foreman (6 feet tall) is now listed at 241 pounds while Catalon (5-10) weighs in at 203.

So let’s start with the assumption the offensive line will improve. Assistant coach Joe Wickline said he is pleased with where his unit is headed, and the group has more depth than last year.

“He’s normally the type of guy who walks around with a little mean face,” guard Sedrick Flowers said of Wickline. “But he’s actually lightened up a little bit. He has a smile walking around this facility. I think he’s excited for it.”

With a year of experience, Foreman and Catalon should have a leg up on their younger competitors, Robinson said. “They’re going to understand what we want as a staff a little better.”

A sly grin creeps across Robinson’s face when talking about Catalon, who the position coach says “is a real quiet, laid-back guy.”

“You’ll get the sense that he’s not paying attention, but he really is,” Robinson said. “He’s extremely deceiving. He has deceptive speed. He has unbelievable power for his size. He may be one of the best natural runners on the team.

“You guys didn’t get a chance to see him last year,” he added. “I think you guys will be in for a pleasant surprise.”

Robinson’s history is that he always plays multiple running backs. “If you work hard, you deserve to play,” he said last season. If the new spread offense is as diverse as advertised, then multiple players at various positions should get a chance. Gray can’t do everything all game.

Will Foreman and Catalon be substituting in or one of the freshmen?

“They’re not going to go away. It creates really good competition,” Robinson said. “That’s what we’ve got to have.”