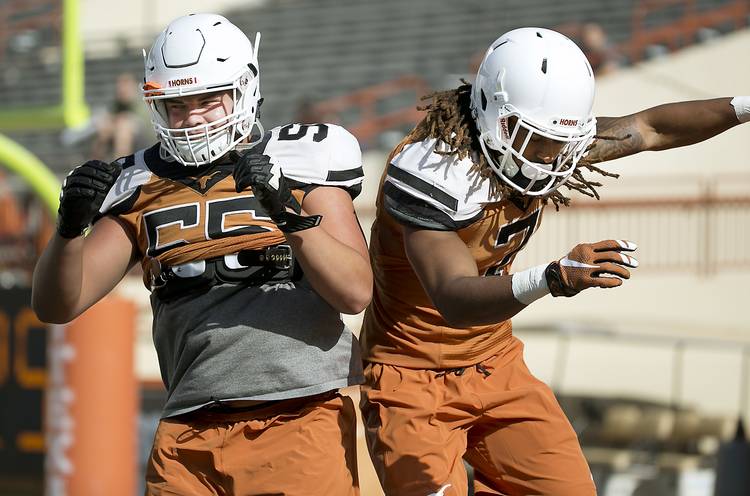 If one were to handicap the odds of specific Texas freshmen starting, offensive lineman Connor Williams would top the list, ahead of even five-star linebacker Malik Jefferson.

The Longhorns have a big hole at right tackle, and the popular belief is that Williams, who’s nimble even at 6 feet 5 inches and 283 pounds, will emerge from preseason camp to fill it. Still, offensive line coach Joe Wickline wouldn’t go that far.

“That’s why you have a fall camp. We’ll find out, ” Wickline said Thursday, the day before the Longhorns held their first practice. “It’s pretty much based on his production and his performance. If he has the ability, he has the chance to do that.”

As camp opened Friday, Williams was locked in a two-man battle with junior college transfer Tristan Nickelson. Other options at the position have dispersed, as Jake Raulerson, who started in the bowl game, is getting reps in the line’s interior, and Darius James and Camrhon Hughes are no longer with the team.

Williams is among five new linemen, a move by Wickline aimed at fortifying Texas’ poorest unit in 2014. Wickline said that Patrick Vahe, the highest-rated recruit of the bunch, will play guard or tackle, but not center, where the coaches are comfortable with Taylor Doyle and Raulerson.

Short yards: ESPN.com has finished its countdown of college football’s top 100 players. Not surprisingly, Texas was not represented…. Former Longhorns coach Mack Brown will make his debut in the announcers’ booth on Sept. 4 when Baylor plays at SMU. Brown will call some Friday night games for ESPN in addition to his duties as a studio analyst on Saturdays…. How are some of the linemen planning to deal with heat in camp? By wearing sleeves, guard Sedrick Flowers said. “If it’s hot, you got to train your mind to say it’s not hot, ” he said…. Hager played defensive end at Westlake High, but he’ll be working at linebacker. If Hager (6-3, 224) bulks up, he could eventually make his way to the line, linebackers coach Brian Jean-Mary said.

Buying in: It’s the Smart thing to do at Texas