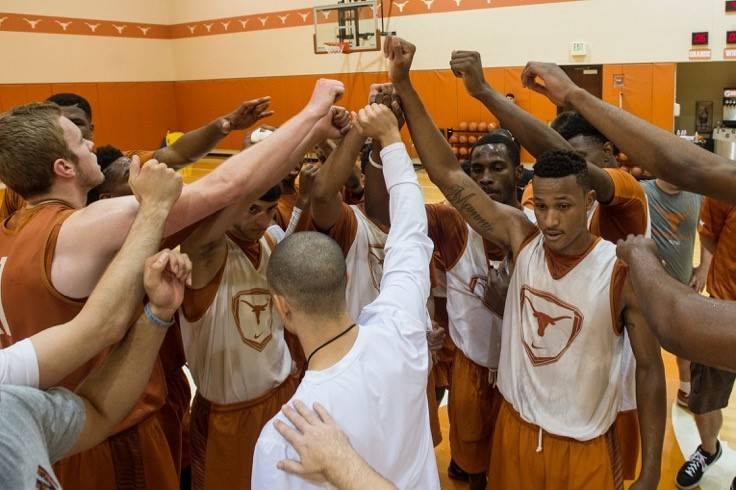 Texas Longhorns coach Shaka Smart and his players huddle during an offseason workout in July. (University of Texas Athletics)

New Texas men’s basketball coach Shaka Smart won the opening news conference in smooth style. Crushed it, actually. In the four months since, he appears to be winning over the Longhorns, too. And that was no easy task.

When Smart was introduced, Isaiah Taylor was so fed up with Texas basketball that he couldn’t wait to pack up and leave. The way March ended, could you blame him?

UT’s star point guard shook his head in disbelief after the late-game meltdown against Iowa State in Kansas City, Mo. He was present in Pittsburgh but had no answers after the what-are-they-doing-out-there performance against Butler in the NCAAs. Taylor held his tongue, but his body language was unmistakable.

Get me outta here.

He wasn’t the only one. Myles Turner was so ready to leave, he started working on a YouTube video that announced his decision to jump into the NBA draft long before the season ended.

“You never really have a feel for where the individuals on a team are when you take over a new situation,” Smart said. “Things are so different from the outside looking in anywhere.”

Last week, Taylor and several of his teammates appeared to be different people. They radiated positive energy. They smiled. Felix boasted about his daily regimen of 600 shots. Holland flexed his arms to show off some bulging biceps. Lammert was dripping with sweat after a midday workout.

“I’ve probably been in the gym more in these last two months than I have my whole time at Texas,” said Taylor, who eventually cooled off and chose to come back for his junior season. The same guard who wanted to leave UT just spent four days in Long Beach, Calif., at an Adidas camp as a counselor and Longhorns ambassador.

Can a new coaching staff really make that much of a difference? Perhaps. Especially when it’s a staff that radiates positive energy, preaches values like appreciation and enthusiasm and demands you “attack the day.”

“Everything he told us from the first day he met with us has been true,” Felix said. “From the time we step out of the bed in the morning, he wants us to be aggressive.”

Felix already feels comfortable poking his head coach. The 5-foot-10-inch guard swears that he’s taller than Smart, but somehow, Smart came out a half-inch taller in the tale of the tape. Felix demands a new measurement and wants Longhorn Network to capture it live.

Holland isn’t sure what to make of Smart’s sometimes blank expression, though.

“He’ll ask me a question, and I’ll give him a really detailed answer,” Holland said. “He’ll just stare at me with no emotion, like a Derrick Rose face. No emotion at all. He makes me wonder, ‘Is what I’m saying that dumb to where you don’t want to respond? Or are you soaking it all in?’ I’m confused.

“It’s that look,” he added,”and everybody who knows him knows what I’m talking about.”

Everyone is growing acclimated to one another. Lammert said assistant coaches Mike Morrell, David Cason and Darrin Horn are so positive, it’s a little unnerving.

“I don’t know if coach Smart gives them supplements to get them going or what,” Lammert said. “It seems like they’re on something, I’ll be honest, but it’s contagious.”

Best anyone can tell, this may be Smart’s secret to success: enthusiasm. He devotes an entire day to it. Enthusiasm Tuesday. “To me, that should be the easiest one, if you set your mind to it,” Smart said.

It’s one of Smart’s five core values, along with appreciation, competitiveness, accountability and something he calls “teamship,” in which players align themselves with team goals.

“He told us if you’re going to come to practice and not have energy, you might as well not come,” Holland said. “He said he’s really open to that. Well, I’m not sure he’s totally open to that.”

If you show up, you best be ready to compete. Nowadays, everything is a competition. “And they’re keeping score,” Felix said.

How many shots can you make? How much can you bench-press? Holland said he has classes with Felix, and he texts Smart that he plans to take more notes in class. Smart, a voracious texter, demands the players communicate with him. “He says if you don’t text back, you lose minutes,” Holland said.

By NCAA rule, teams cannot have full workouts during the summer. Groups of players come in at various times during the week. Smart said there has been no full-scale implementation of X’s and O’s just yet, only bits and pieces of things.

Taylor and Holland said players are focused on individual improvement at the moment. Taylor, who is a chiseled 184 pounds, said he already feels like an all-around better player. He’s studying “pick-and-roll reads, being aggressive on defense, 15-foot jumpers, when to feed the post, when to put my players in position to make a great play.”

And players better get used to shooting, shooting and shooting some more. The Horns do need to score more points. Last season, Texas was eighth in the Big 12 at 67.4 points per game.

“He’ll never get mad if you take a wide-open shot,” said Lammert, who has been working on taking one dribble in from the 3-point line before shooting. “If you miss it 10 times in a row, he’ll tell you, ‘Keep getting ready to shoot it with confidence.’ ”

What’s odd is that this bunch shouldn’t be short on confidence.

Think about this possible starting five: Felix, Holland and Kendal Yancy in the backcourt with Lammert and Cam Ridley up front. All but one have more than 2,000 career minutes. Taylor has 1,812, thanks to missing 10 games with a broken wrist.

So what happened during last season’s disappointing 20-14 campaign? It can’t all be because of former coach Rick Barnes.

“A lot of people probably didn’t believe in themselves,” Taylor said. “I think a lot of people weren’t afraid, but they didn’t want to make a mistake and make anybody mad. This year, Shaka is basically telling us that there are going to be mistakes, but you’ve just got to limit those mistakes. It’s all about positive reinforcement with him.”

The season opener is about three months away. Plenty of time for Smart, the assistants and the players to continue building better relationships.

“I feel good about the progress we’ve made so far,” Smart said.

Texas gives its fans a show they can appreciate