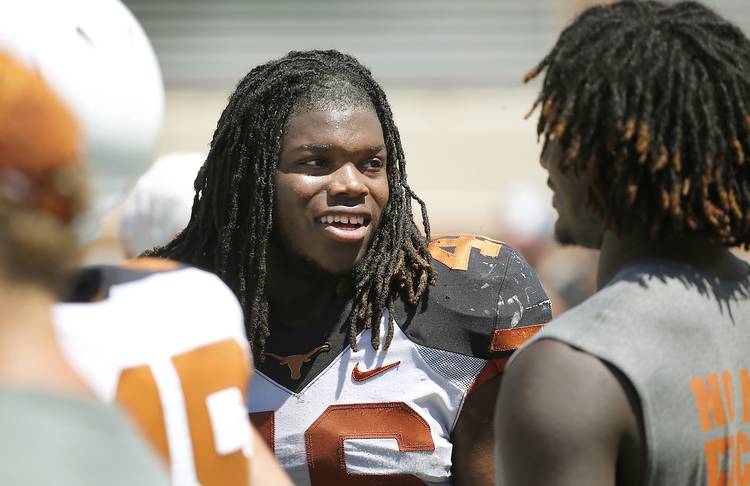 Six of the top seven tackle leaders from 2014 are gone.

“This camp is going to be about finding some leaders, finding the right fit for all of our young players,” Bedford said. “We’re telling the kids to go have some fun. Be yourself. Let’s fly around and let’s get the best group of guys out there that can give us a chance to win.”

Sunday’s open practice was a not-so-subtle reminder how many new players Bedford must find and how difficult that process may be.

Coach Charlie Strong has stressed the importance of being good along both lines – offensive and defensive. Brown’s departure leaves a sizable hole that coaches hope junior Hassan Ridgeway can fill. However, Ridgeway hasn’t practiced yet due to an undisclosed injury. Strong indicated last week it was minor.

Paul Boyette and Poona Ford were with the first team with defensive ends Shiro Davis and Naashon Hughes. Fifth-year senior Desmond “Tank” Jackson is recovering from a broken foot but appeared to be running well during drills.

More Malik: On the linebacker front, freshman Malik Jefferson continues to work with the first-team unit, alongside veterans Peter Jinkens and Tim Cole. Jefferson had one of the biggest hits of the day when he laid out freshman Kirk Johnson during one-on-one drills.

Jefferson, who could be the face of the program’s future, will likely start against Notre Dame.

The other freshmen linebackers are hard to peg at the moment. Linebackers coach Brian Jean-Mary gave Anthony Wheeler and Cecil Cherry plenty of coaching as practice wore on. Not the polite kind, either.

In the backfield: Duke Thomas has one cornerback spot nailed down, and Dylan Haines will likely be a starting safety. The Horns have intriguing options elsewhere.

Antwuan Davis and Bryson Echols have a chance to win the job opposite Thomas. Jason Hall must prove he’s not a one-hit wonder, although Oklahoma’s Samaje Perine will say it’s a good one. Freshmen Davante Davis and Kris Boyd both had head-turning moments in the first few practices.

Just like last season, the Horns will utilize a fifth defensive back most of the time. That’s due to the pass-happy offensive systems in the Big 12. Redshirt freshman John Bonney has played the nickel corner position, Diggs’ old spot, with aplomb.

Texas gives its fans a show they can appreciate

DeAndre McNeal making his own mark