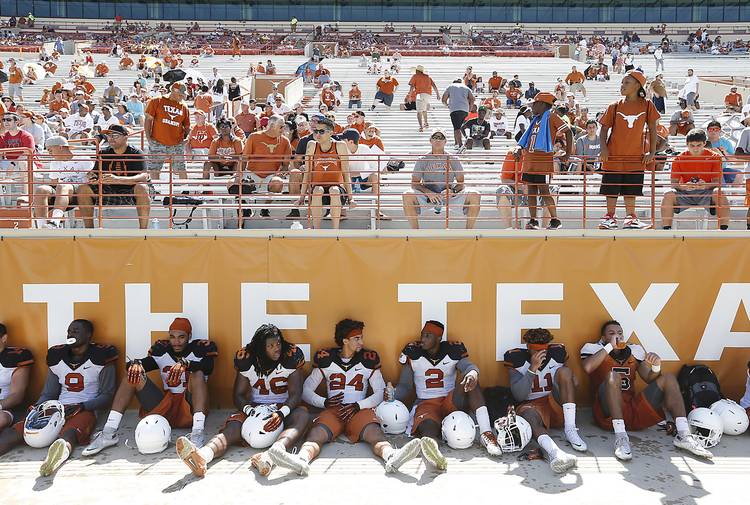 Last Friday’s practice felt uneven. Too many little things went wrong to get excited about what went right.

The Longhorns changed venues on Sunday, players put on shoulder pads, fans were welcome to watch and business started picking up. The quarterbacks looked sharper, and several one-on-one battles had sharp edges.

An estimated crowd of about 2,000 soaked up some intense sunshine just to see an equally demanding 2½-hour practice inside Royal-Memorial Stadium. Many stayed for autographs in the renovated north end zone and gobbled up offerings from the new Torchy’s Tacos concession stand just inside gate 8.

“I probably need to do this more often where guys just feel it. They’re in the stadium. It’s time to compete and go play,” coach Charlie Strong said. “Overall, we know there’s steps still to be made, but we just need to improve.”

Perhaps there is no quarterback competition.

Tyrone Swoopes, who was 5-7 as a starter last season, took every snap with the first-team offense during Friday’s and Sunday’s practices open to reporters. Saturday’s practice was closed. Redshirt freshman Jerrod Heard worked with the second team.

On Sunday, Swoopes connected with multiple receivers, a group with a case of drops two days prior. Heard drew fan applause when he threw a long touchdown pass to Ty Templin. To be clear, the play was run against air. The defense was on the field’s other end.

Football fans want to see hitting, and there was plenty of it.

Just after an opening stretch period, players formed a circle for the famous “bull in the ring” drill. Coaches call out various players, ordering them to face one another head on. The object is to stop a ballcarrier.

The only person unamused was freshman safety DeShon Elliott, who limped out of the circle with a toe injury. He left the field and did not return. Strong gave no update on Elliott’s long-term prognosis.

They squared off again, and Omenihu got McNeal down to his knees. But McNeal still came away barking, ready for more.

Poona Ford mixed it up with Connor Williams. When Derick Roberson and Tristan Nickelson traded blows, it felt more like heat taking its toll than angry teammates.

“It’s ether intensity or just getting beat one-on-one somehow,” Strong said. “One of the two.”

Afterward, fans hustled into the north end zone for the autograph session. Torchy’s Tacos was open for business. Plucker’s, Hat Creek Burgers and Austin’s Pizza will also have concession stands inside Royal-Memorial Stadium this fall.

“As far as the food offerings, the want and demand for good, quality food is there, and I think people are going to be really excited about that,” said Mike Rypka, founder of Torchy’s Tacos.

Young fans could play games, get their pictures taken with Bevo and UT cheerleaders and boogie with a DJ inside the food court. UT officials want to make that area a pregame party four hours before every kickoff.

Texas Athletic Director Steve Patterson said he expects season ticket sales to “be about right where we were last year.” Ticket revenue is up 9 percent because of the price increases unveiled in March.

“I think every year, you evaluate what happens on and off the field,” Patterson said. “What happens with how the team plays, how the student-athletes are responding, how the community responds. I think right now, all the trend lines are good.”

Buying in: It’s the Smart thing to do at Texas