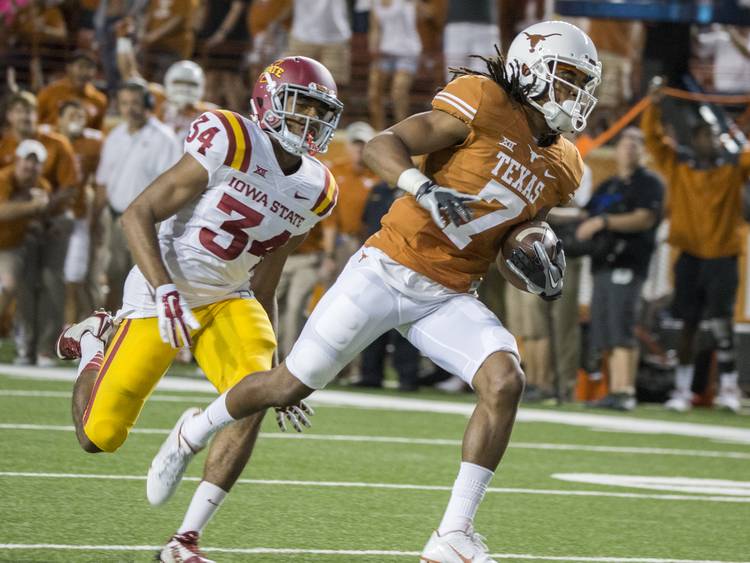 It seems odd that senior Marcus Johnson doesn’t get mentioned much in a conversation about Texas’ top offensive playmakers. Then again, nobody thought much about John Harris last August, either.

Harris felt his Texas football career was going nowhere, and he almost transferred before his senior year. Fortunately for Longhorns coach Charlie Strong, Harris stayed and became the school’s only 1,000-yard receiver since 2009.

Truth be told, many thought Johnson would be the one getting those passes and all those yards. Instead, Johnson finished the 2014 season with a pedestrian 27 catches for 313 yards and only one touchdown.

Texas has a bevy of hungry, young receivers wanting to make names for themselves this season. Freshmen John Burt and Ryan Newsome won praise from the get-go. Veteran Daje Johnson wants to atone for his past, and junior Jacorey Warrick and sophomore Dorian Leonard believe it’s their time, too.

“I don’t know if we have a particular standout,” Norvell said. “I’m really excited about all of them to be honest with you. I’m excited to see who is going to step out now that we’ve gotten to fall camp.”

Johnson always has been his own toughest critic. He openly admitted last season that he didn’t run sharp routes at times and had several drops. Former Texas receivers coach Les Koenning said he was always “waiting for the light to come on” with Johnson.

That meant running more precise routes. Getting clean separation from defensive backs. Looking the ball into his hands. Making the catch, then turning up field. At this level, every element of fundamental play matters.

“When I look back on the film and all the different things that happened, I’ve said it so many times, it was a learning experience,” Johnson said. “It was something I needed to go through.

“Everything I’ve done this summer, I’ve worked on perfecting my craft and doing what I have to do to make sure those mistakes don’t happen again.”

Harris carved his niche last season with dependable, chain-moving catches on third down. Quarterback Tyrone Swoopes struggled through his progression of reads, so if Harris was open, Swoopes pulled the trigger. The faster Swoopes got the ball out of his hands, the better, quarterbacks coach Shawn Watson believed.

Harris parlayed that success into an invitation to the Philadelphia Eagles’ training camp, although he was released Monday.

Now will Johnson get those same benefits as part of an up-tempo system in which Swoopes has presumably improved? Hard to say. During the two recent practices open to reporters, Swoopes leaned on his safety value, usually running back Johnathan Gray, if things didn’t click.

Johnson must make himself an open, inviting target for Swoopes, Jerrod Heard or whomever.

“I feel more prepared and comfortable than I have been in a long time,” Johnson said. “That’s come from all that extra work and just putting myself in that comfortable spot.”

DeAndre McNeal making his own mark