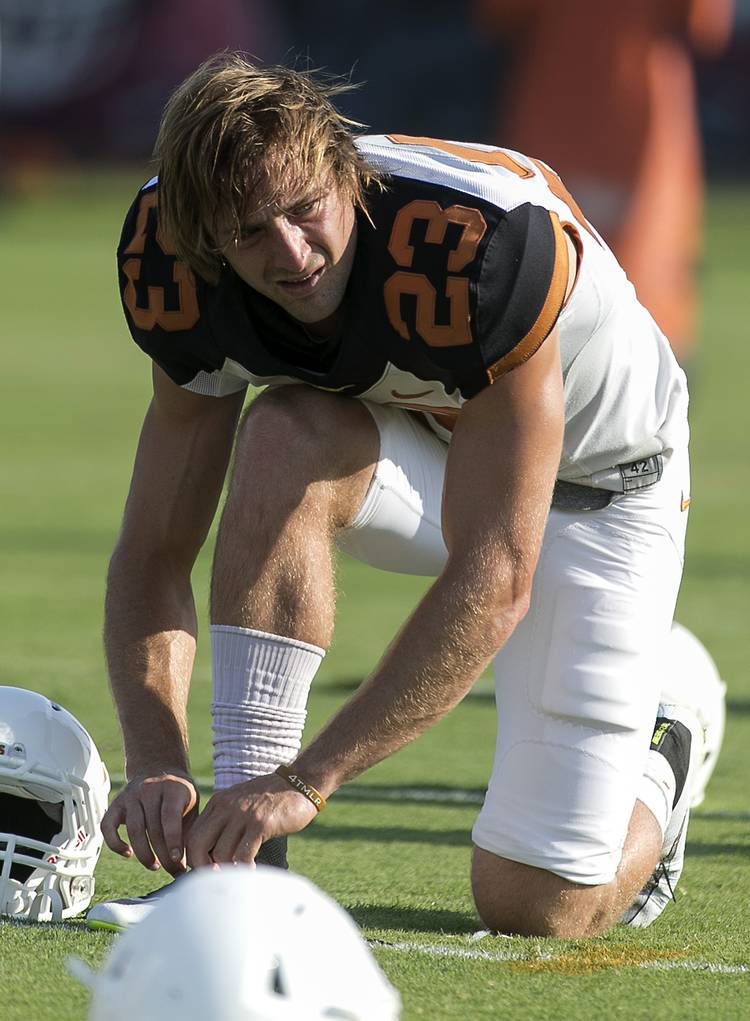 Perhaps you’re among the many thousands who’ve had their curiosity piqued by Rose’s stunts. In June, Texas’ senior kicker uploaded video of himself executing a backflip as quarterback Trey Holtz tossed a ball into the air at the 5-yard line. Rose and Holtz didn’t connect on their first 70-plus attempts, so the videographer grew restless and hit the stop button before Rose’s effort finally cleared the crossbar.

Then there was the 80-yarder Rose drilled into the north end zone at Royal-Memorial Stadium. It took only a kicking tee and two tries to get it right.

“It’s kind of frustrating, but understandable that those are the two things that blew up, ” Rose said. “A 40-yard field goal isn’t going to go viral, unless you’re (Justin Tucker) and you beat the Aggies with it.”

The attention Rose received had a precedent. If you recall, his hair, a disheveled blond mop, caused the Internet to bellyache last summer.

Rose wants to leave the silliness behind and simply kick. Oh, and to join the six Longhorns kickers who’ve been named All-Americans. That’s his goal, he says, and it’s rather lofty given that last season Rose missed one-third of his kicks – converting 14 of 21.

“From last year till now, I feel 110 times better, ” Rose said. “I’ve been consistent from 40 and in. No misses for a while now. Last year wasn’t up to my standards, so this year it would be great to be an All-American.”

Texas coach Charlie Strong has been ribbing Rose about his Web fame and wishes he would focus on conventional kicks.

“That’s where our money’s going to be made, ” Strong said.

Truth is, Rose worked more than he played this summer. He spent “nine or 10 days” kicking alongside former Longhorns great Phil Dawson, who corrected a flaw in Rose’s first step.

“Something I had never taken the time to sit back and think about, ” Rose said. “Needs to be the same every time.”

Dawson, entering his 17th NFL season and his third with San Francisco, owns a home in Austin and trains in the offseason at UT’s football facility. The sessions with Rose were less teacher-pupil than they were “kicking with a friend and picking things up along the way, ” Rose said.

Rose, who is something of a perfectionist, learned from Dawson to come to peace with made kicks that squeak through. No extra points are awarded for beauty.

Unlike other areas of Texas’ special teams, Rose is tried and true. Punters Michael Dickson and Mitchell Becker have been inconsistent in practices. A half-dozen guys are auditioning at punt returner to replace Jaxon Shipley. The kick-return unit struggled last season.

A year ago at this time, Rose was locked in a battle with Nick Jordan that Rose won quickly. Jordan is back, but the job belongs to Rose, who was 11 of 14 to close last season. In the spring game, Rose was 4 of 5 and made attempts from 52 and 49 yards. “That was a great way for people to see what they should expect this time, ” he said.

Rose converted from 51 yards last year at Oklahoma State, but he says his range extends farther.

Cue up the video.