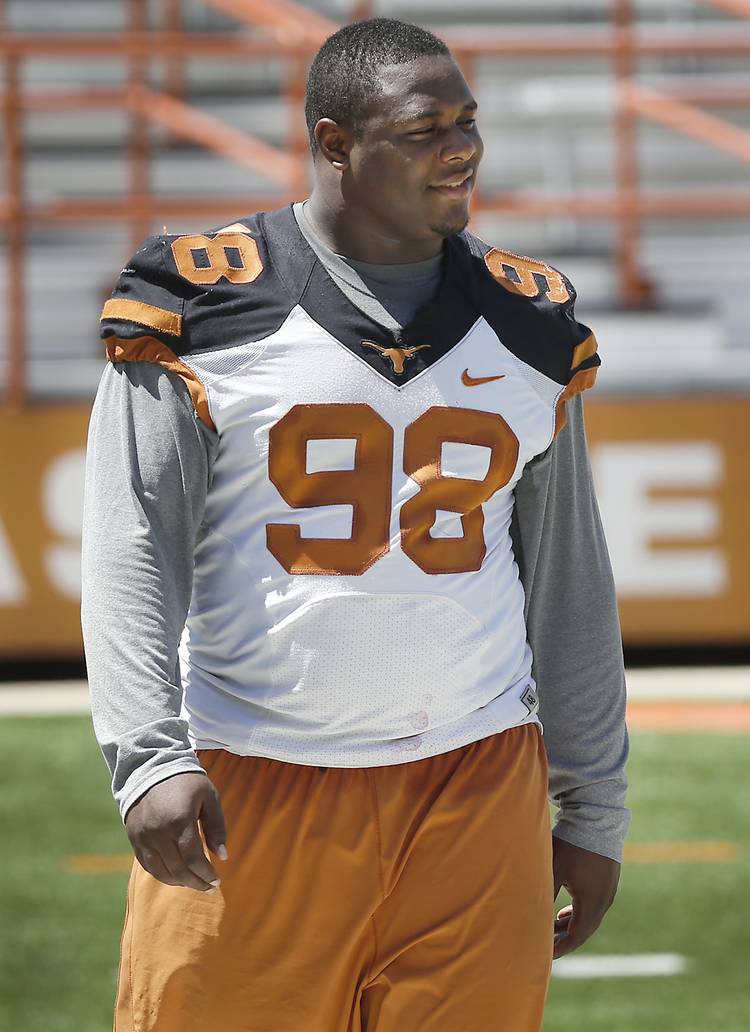 The guys up front on Texas’ defense have been standing to the side in training camp.

Expected to be a strength of the team, the defensive line has been weakened by injuries, academic issues and even a root canal. At this point, none of the issues are thought to be crippling, and there’s optimism that the Longhorns will be at full strength for their season opener at Notre Dame.

Yet it was a little deflating to watch Tuesday’s practice go on minus tackle Hassan Ridgeway and ends Derick Roberson, Caleb Bluiett and Naashon Hughes.

Ridgeway has an undisclosed injury while Roberson and Bluiett have academic concerns to clear up. Hughes had a root canal.

Tackle Desmond Jackson, meanwhile, appeared to be practicing with discomfort after undergoing surgery on his right foot last September.

Cherry leaving: Freshman linebacker Cecil Cherry has officially left the team, confirming via Twitter on Wednesday that he had been released from his scholarship.

Cherry, of Frostproof, Fla., grew disenchanted with Texas after just three practices over a lack of comfort with the defense and over not receiving the jersey number he had desired, his father said.

Winston Cherry dismissed the possibility of his son patching things up with Texas and said the process of finding a new school will move quickly.

“We have got to put him back out there and see who wants to get him, ” Winston Cherry said.

After Tuesday’s practice, Longhorns coach Charlie Strong didn’t have much to say about Cherry or about running back Donald Catalon, who also considering transferring.

“We always want guys to stay here, but anything you get in this program you’re going to work for, ” Strong said.

Hill nearing debut: Freshman cornerback Holton Hill was expected to visit a doctor on Wednesday. Strong said he hoped the four-star prospect from Houston Lamar would be cleared to begin practicing.

Hill has been sidelined with an undisclosed injury, weakening his bid to win the cornerback spot opposite Duke Thomas. That competition instead is between Bryson Echols and Antwuan Davis, though freshman Kris Boyd is lurking.

Swoopes out front: Through three practices open to the media, quarterback Jerrod Heard has yet to take a snap with the first-team offense. By any measurement, the needle points to Tyrone Swoopes retaining his job and starting at Notre Dame.