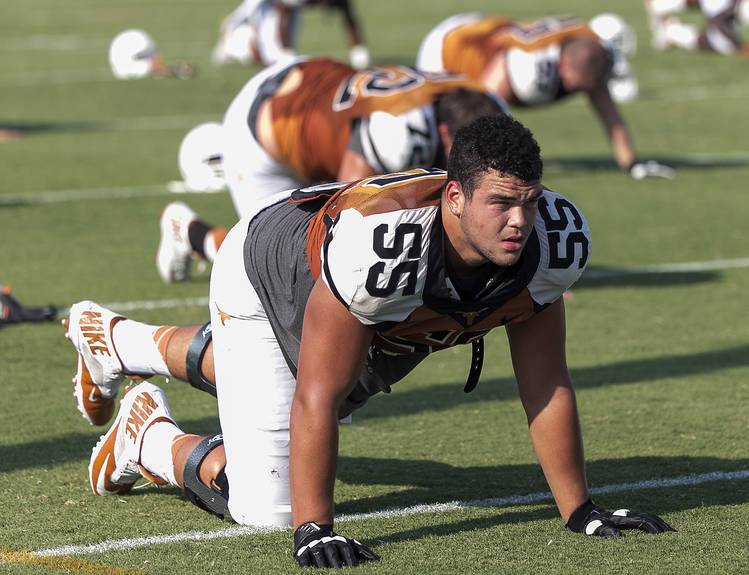 On the first day of training camp, Longhorns freshman offensive tackle Connor Williams introduced himself to safety Dylan Haines by mauling him. Just flat-out drove Haines into the turf. And this was in shirts and shorts.

On day 3, Williams got into a scuffle with defensive tackle Poona Ford. Shoulder pads protected both.

Millennials don’t have a clue what a nasty Texas offensive lineman looks like. The school hasn’t had one drafted since 2008, a staggering, inexcusable fact. Stan Thomas, Blake Brockermeyer, Leonard Davis, Mike Williams and Tony Hills are just names in a dusty record book these days.

Connor Williams is new to all of this, so don’t hang his All-America portrait inside the football building just yet. Still, it’s refreshing to watch the Longhorns practice this month and see an offensive tackle willing to hit someone in the mouth.

Offensive line coach Joe Wickline must like what he sees. Williams is the projected starter at right tackle ahead of sophomore transfer Tristan Nickelson.

“Hey, he’s just working like the rest of us,” said Marcus Hutchins, the likely starter at left tackle. “He’s trying to earn a spot like we all want to do.”

Williams is listed at 6 feet, 5 inches, 283 pounds. He graduated early from Coppell and enrolled at Texas for the spring semester. That gave Williams an inside track to playing time.

At Coppell, Williams played offense and defense. The two-way standout was offered scholarships as a big tight end (Michigan), center (Oregon) and multipurpose lineman (everybody else).

“I think athletically and maturity-wise, he can play immediately,” Coppell coach Mike DeWitt said. “I know that’s part of the reason why he graduated early, and I think he feels that he can play early.”

The Horns believe the offensive line will be upgraded this season, based on returning experience alone. Hutchins, Sed Flowers, Taylor Doyle and Kent Perkins all survived last season and returned.

Flowers mentioned that Wickline appeared more upbeat while walking the halls this summer. Maybe things are on the uptick. Wickline took umbrage, though, at being asked whether his unit was dragged through the mud last year.

“Dragged through the mud? In what way is that?” Wickline said. “Since I don’t read the Internet, I don’t read the newspaper and I don’t watch TV, that’s the first I’ve heard of that. I hope they’re pissed off.”

Williams sure looks to be. While he hasn’t been made available to reporters yet, Williams is doing plenty of talking with his pads. That’s exactly what Texas needs up front.

“He’s so mature and just works, doesn’t say much,” Texas coach Charlie Strong said. “Everything you ask him to do, he does. I was telling Wickline that I actually told his parents that he’s going to be a really good player.”

Good enough to make a difference? Wickline knows what he wants to see.

“If you can’t be a tough guy,” Hutchins said,”you can’t play for him.”