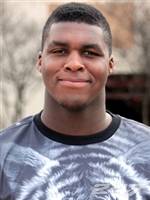 Offensive lineman Ronnie Major has been cleared academically to join the Texas football team, but tight end recruit Devonaire Clarington remains in limbo pending an investigation of his score on a standardized test.

On Friday, a source familiar with the situation said ACT was looking into the validity of Clarington’s score – he told the American-Statesman it was a 26 – because it is higher than his previous academic record might suggest.

Clarington was cleared academically by the NCAA one month ago, but Texas is proceeding with caution and will not let him begin practicing until ACT’s investigation is completed, the source said. By allowing Clarington to play, Texas would run the risk of incurring violations if it later came to light that Clarington’s test score was invalid.

Clarington, a four-star prospect from Miami, has yet to report to campus.

Major, on the other hand, can start practicing once he arrives on campus. The former Huntsville High star tweeted that he will be moving to Austin this weekend after resolving an academic snag that had kept him from reporting for preseason camp.

Texas confirmed that the 6-foot-6-inch, 290-pound Major will be joining the team.

QB battle to pick up: Through three practices open to the media, Tyrone Swoopes has received every first-team snap at quarterback, giving the appearance that he had all but sewed up the position over Jerrod Heard.

Not so fast, said Shawn Watson, the Longhorns’ play-caller and quarterbacks coach.

On Friday, Watson said Heard had received first-team reps – in closed practices, presumably – and that he will get more in the coming days. Friday was to be the final practice tied to installing the offense.

“After today, there will be more of a mix, ” Watson said. “I also want to get a look at the young guys and get quality reps for Kai (Locksley) and Matthew (Merrick).”

Locksley impresses: Watson gushed about Locksley, calling the freshman from Baltimore “a very, very pleasant surprise.” Nevertheless, it appears Locksley is not competing for a starting job and is squarely behind Swoopes and Heard.

Short yards: Though he’s been overshadowed on the line by fellow freshman Connor Williams, guard Patrick Vahe is also having a productive camp. “I refer to him as a plumber, ” Watson said. “He doesn’t mind hard work.” Watson added that Vahe, of Euless Trinity, could be a “cage fighter.”… Defensive coordinator Vance Bedford said injured defensive tackle Hassan Ridgeway is expected to practice Saturday…. Watson teared up when asked if he is personally motivated by making Swoopes better. “When you coach, you do it for the kid. That’s why I’m doing it.”… Gov. Greg Abbott stopped by and spoke with the team at Friday’s practice. A day earlier, UT President Gregory L. Fenves paid the Longhorns a visit.

Malik Jefferson is tackling the hype