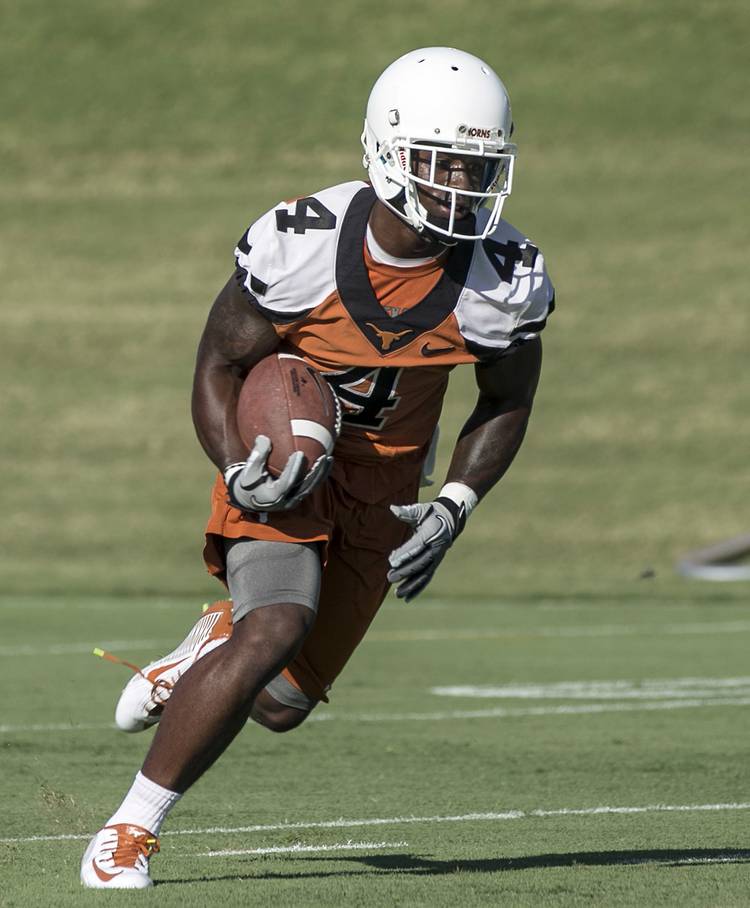 Texas wide receiver Daje Johnson is back to wearing No. 4 this season. (RODOLFO GONZALEZ / AMERICAN-STATESMAN)

There are countless things easier to do on a football field than catch a punt.

The exercise has flummoxed many , out of fear of getting leveled by a full-speed tackler or losing sight of the ball in bright stadium lights. For that reason, Texas coach Charlie Strong went with a conservative approach last season and used Jaxon Shipley, who could be trusted to secure the catch.

In year two, Strong seems open to adding some electricity to the position. Among the candidates to replace Shipley, who averaged 9.3 yards per return, are freshmen Kris Boyd and Ryan Newsome and senior Daje Johnson.

Johnson, a fixture in the return game early in his career, relinquished the role to Shipley when he was suspended for the first four games of last season.

Strong said Duke Thomas is also getting a look.

“Last year, you were just trying to find one guy to catch the ball, ” Strong said. “Don’t worry about returning it; just get it caught.”

It sounds as if the same players are getting work at kickoff returner, along with 241-pound running back D’Onta Foreman.

Scrimmage: Speaking of Foreman, his was the first name Strong mentioned when asked about standout performance in Saturday’s scrimmage.

Strong said that by the end of the day the defense “didn’t want to tackle” Foreman or 232-pound back Chris Warren.

Strong also singled out quarterback Tyrone Swoopes, while giving an obligatory compliment to Jerrod Heard, as well as wide receivers John Burt and Johnson; the latter scored touchdowns on a reverse and a deep ball.

Short yards: Strong, who frequently praises the leadership of Johnathan Gray, provided an anecdote about Gray recently entering a special teams meeting and requesting to be on punt coverage. “That’s the attitude I’m talking about, ” Strong said. “Now it’s kind of creeping into the team.”… Strong said he expects to get clarity on tight end Devonaire Clarington’s eligibility this week. The ACT is reviewing the validity of Clarington’s test score…. Former Longhorns linebacker Cecil Cherry has transferred to South Florida, according to his father…. Strong praised freshman linebacker Breckyn Hager’s instincts but revealed the Westlake graduate hurt his shoulder Saturday. The injury is not thought to be significant.