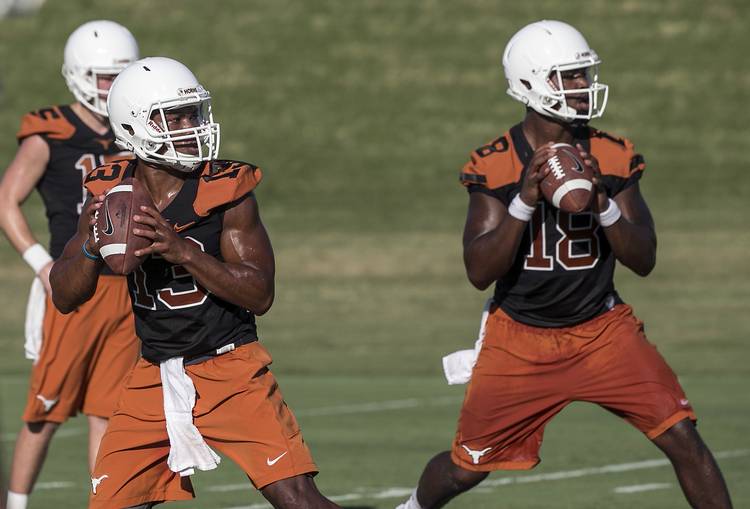 Huddling is so passé.

This is a hurry-up, microwave, waiting-is-for-suckers world. College football isn’t any different. Spread offenses have a ready, aim, fire mentality. Oh, you screwed up? Don’t worry. Hustle up and go again.

The Big 12 tote board is pretty clear, though. After watching what happened last season, Strong is casting his offensive lot with the Baylors and TCUs of the world.

“Last year, it was a lot more hurry-up-and-wait,” tight end Andrew Beck said. “Now it’s hurry up, get the play and go.”

“It’s a thousand times faster than last year,” he said Tuesday. “That’s what we’re going to try to beat teams with – speed.”

So how’s all this sitting with the head coach?

“Just surprised how well right now we’re functioning,” Strong said. “The thing about it is we’re going out and each day we’re getting better. We haven’t taken a step back yet.”

As Strong said in the spring,”95 percent of the players in Texas” grew up playing spread offenses. Better to fit the scheme to the athletes than the other way around.

Faster play is so prevalent in today’s game, officials now stop the action to allow for defensive substitutions if the offense switches players. Alabama coach Nick Saban once railed against the up-tempo speed, saying it was a safety issue. Guess who’s now gone all-in with a spread offense after getting thumped by Ohio State?

In Austin, this philosophical shift is welcome.

Quarterbacks coach Shawn Watson said the Horns are running the same plays as last season. But “we’ve made ourselves more streamlined,” he said. A huge change came in the play-calling verbiage and how the plays are signaled in.

“It’s run to the line as quick as you can,” Beck said. “Linemen don’t even look back (for the play call). They block during the play and run to the next spot. Whoever the quarterback is at the time will tell them what to do. We all look over and get the signals for ourselves and run the play.”

Ah, the quarterback — the bugaboo in Texas’ equation. Watson insists the Horns will have the same playbook for Tyrone Swoopes and Jerrod Heard, even though the two have different skill sets. How that works remains to be seen.

On Tuesday, Strong and his players acted as if Swoopes were the starter, though no one made a clear pronouncement of such. The coach has said both will play at Notre Dame. At this point, it appears Swoopes’ job to lose.

“I think everyone believes in Tyrone Swoopes,” linebacker Peter Jinkens said. “He’s a real good quarterback. We’ve just got to come around him and motivate him, because we know he can be that guy.”

Look at how Baylor’s success improved just by picking up the pace. The Bears ran 771 plays in coach Art Briles’ first season in 2008, a dismal 4-8 campaign. The next year, Baylor ran 777 plays and went 4-8 again.

TCU coach Gary Patterson stuck to his guns and defensive religion after the Frogs joined the Big 12 in 2012. But TCU switched to an up-tempo offense and got incredible, out-of-nowhere quarterback play from Trevone Boykin last season. The Frogs averaged 533 yards per game and finished the year 12-1.

This will work for Texas, too, if Swoopes undergoes a Boykin-like metamorphosis. Or if Heard proves capable. It could be Texas simply needs more time and another recruiting cycle to hit it full stride.

Either way, this is football here in the 7-on-7 21st century. Get busy moving, or get busy losing.

“You as a coach, you’ve got to be willing to change,” Watson said. “It’s stretched me. I come to work fired up. I can’t wait to see what we can do next. So the creativity has been rejuvenated.”