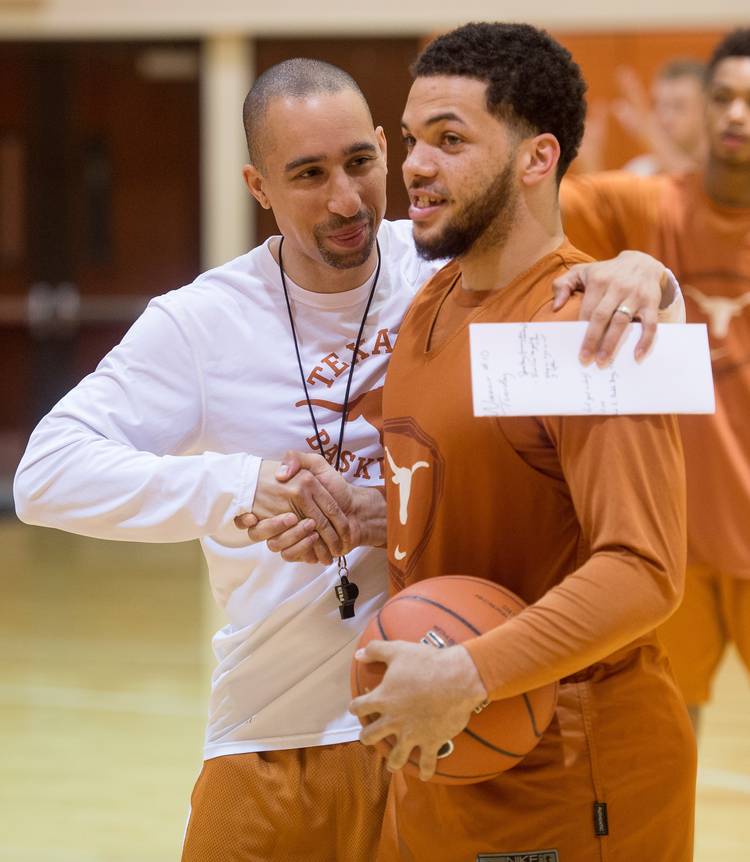 When basketball season begins, expect to see a smorgasbord of stories about Texas’ depth and experience. Bring a pillow on senior night. It might take a while.

Coach Shaka Smart and his assistants are dialed into this year’s team, but they also have an eye on the future. Five seniors are leaving — make it six if junior guard Isaiah Taylor jumps into the NBA draft.

Essentially, Smart will have to rebuild half the roster after his first season.

Thus, an intriguing question: What does Smart want the Texas roster to look like in the years ahead?

“There are some great players that were quote, unquote ‘undersized’ at their position. We’re looking for other factors,” Smart added. “Size and athleticism is something that we will factor in. But we want guys that have a high motor. Guys who want to play a fast, exciting, up-tempo style. We love guys that can make plays from all five positions.”

This season, the Horns still have a sizable front line. Cam Ridley, Prince Ibeh and Connor Lammert are all 6-foot-9 or taller. Shaquille Cleare, a 6-foot-8 bruiser, joins the mix after sitting out per NCAA transfer rules. Those are four solid rim protectors.

But what about the guards and wing players? Does Smart want only players from the 6-foot-2 to 6-foot-6 variety? Yes, every coach wants tall players, obviously. But Smart appears to value sheer athleticism above all else.

At this point, it’s difficult to pinpoint exactly where the Horns are headed long term in recruiting. Smart and his staff are still developing relationships with the state’s high school coaches. Just like football coach Charlie Strong, Smart had to hit the ground running, figure out who’s who, what’s what and where’s that?

The Horns have only one player committed for the 2016 class. Jacob Young, a four-star guard from Houston Yates, is a 6-foot scorer considered the 10th-best player in the state, according to Horns247.

Keep close watch on the type of players committing to Smart’s program in September and October. Key recruiting weekends are usually tied to home football games, when recruits can get an eyeful of what the campus is like. That will give some insight as to the type of team Texas assembles in the future.

De’Ron Davis, a 6-9 forward from Aurora, Colo., is the top-rated player in his home state. In fact, Texas is also chasing the No. 1-rated players in New York, Vermont, Maryland, Georgia and Florida. James Banks, a 6-10 center rated the third-best player in Indiana, is scheduled to visit UT this weekend.

Just because Smart has six or seven scholarship slots available doesn’t mean he’ll sign that many during November’s early signing period. Remember, Myles Turner signed with Texas during the late signing period in May 2014.

“There’s not really a magic number that we have,” Smart said. “I don’t know for sure how many guys we’ll sign. We’re excited about the guys we’re recruiting and excited about showing them Texas. There’s quite a few guys that haven’t seen our campus or our facilities.”