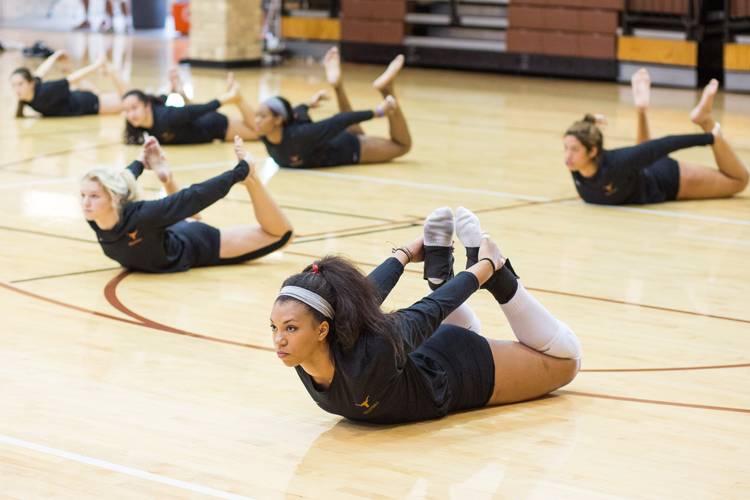 Ebony Nwanebu, a transfer from USC, stretches before practice with the University of Texas volleyball team Aug. 21. 08/21/15 Tom McCarthy Jr. for AMERICAN-STATESMAN

June 5 was an eventful day in the life of Ebony Nwanebu.

On her 20th birthday, Nwanebu announced she was coming home to finish her volleyball career at Texas.

“I wanted my birthday to be memorable,” she said.

Years earlier, Nwanebu — who played at Lovejoy High School in Lucas — couldn’t wait to leave the Lone Star State, and let coaches know as much. The nation’s No. 7 recruit in 2013, Nwanebu never gave Texas much of a look and signed with USC.

“She was one of the few that got away,” Longhorns coach Jerritt Elliott said. “When we got information she was coming back, we were excited.”

The 6-4 Nwanebu will replace All-American Khat Bell at opposite hitter when Texas opens Elliott’s 15th season this weekend in the American Campus Classic. The third-ranked Longhorns play Rice on Friday, then UC-Irvine and LSU on Saturday. All matches are at Gregory Gymnasium.

Nwanebu, who was born in Austin, said she wants to show fans “a better version of Ebony than from my freshman year.”

Tall order. She was named the country’s top freshman, hitting .358 and garnering first-team All-America honors. Nwanebu kept USC afloat in the regional finals, registering 30 kills on 53 swings with no errors in a five-set loss to Washington.

“She’s got the ability to take over a match,” Elliott said.

Things couldn’t have been going much better, but the glow of LA soon faded. Nwanebu’s sophomore year was compromised by a lower back injury, and her hitting percentage dipped to .226. Missing her family back home, she went shopping for a new school and chose Texas over Wisconsin.

Baker coaching: Due to injuries, Tiffany Baker never got a chance to show her volleyball potential at Texas and called it quits in the offseason.

Baker, who had one year of eligibility remaining, never envisioned coaching, but that’s exactly what she’s doing as a graduate assistant at Texas State under Karen Chisum.

“The hours are long, but it’s pretty cool just being out of playing and seeing the other side of things,” Baker said. “It’s cool to see the coaches’ point of view.”

Baker, of Lewisville Hebron, was the nation’s No. 4 recruit, but couldn’t get healthy long enough to live up to the billing. She started her career at Tennessee, but didn’t play for much of her sophomore season due to a lingering knee injury. Baker transferred to Texas and had surgery, but never returned to her old form. Compounding matters was a back injury she suffered last November.

Baker played in just seven matches and didn’t suit up for most of the season.

“I used to feel bitter about it,” Baker said. “I cry a lot about it, especially this spring. I just wasn’t ready for my career to end. I realize God has a plan and everything works out.”

“That’s how that programs works,” she said. “They get the best of the best year in and year out. There’s been a lot of times where they’ve won big games, obviously the national championship a couple years ago, with freshmen on the court. I don’t have any doubts.”

Baker’s new team should be good, too. Texas State was 22-12 last season and finished second in the Sun Belt.

Breaking down the schedule: Baylor

All eyes on Johnathan Gray