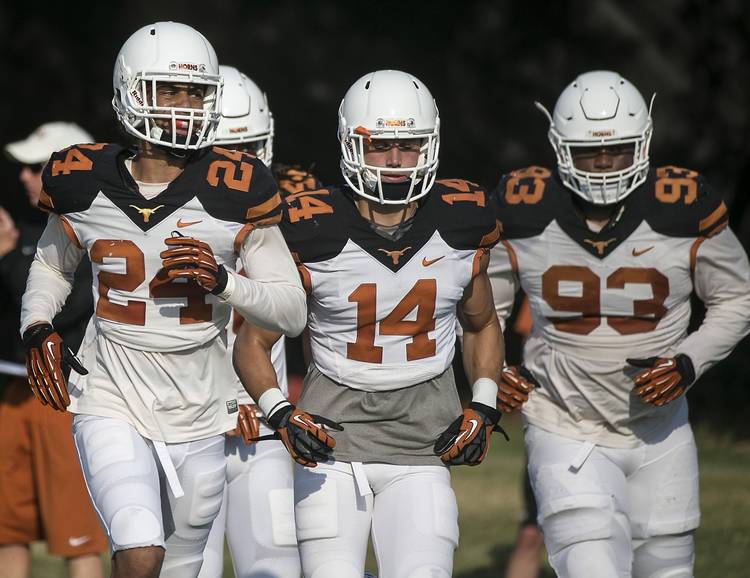 A breakdown of Texas’ 2015 roster — by position units:

QUARTERBACKS: Competition was promised, but Jerrod Heard hasn’t provided much of it to incumbent Tyrone Swoopes, whose poor first season as the starter had some critics believing his time is already up. Swoopes excelled on the handful of occasions the offense went up-tempo, as he seemed liberated by the free-flowing pace that will be more constant this season in Shawn Watson’s revamped spread system. Freshman Matthew Merrick is headed for a redshirt year, but fellow newcomer Kai Locksley could push Heard for snaps.

RUNNING BACKS: Johnathan Gray’s production has been undermined by an Achilles injury, poor blocking and splitting carries for three seasons (with Malcolm Brown). As a senior, Gray’s burst is back, he’ll be running behind an improved front, and he’s the backfield’s undisputed first option. Big-bodied D’Onta Foreman, who has looked surprisingly nimble for his size, should hold off freshmen Chris Warren, Kirk Johnson and Tristian Houston.

WIDE RECEIVERS: Here comes a moment of truth for two seniors named Johnson. Marcus Johnson was primed for a breakout season in 2014 but instead surrendered that honor to John Harris and finished with a disappointing 27 catches for 313 yards. Daje Johnson’s season was an even bigger letdown; couldn’t stay on the field because of a suspension and a hamstring injury. He played in six games, with seven catches. New receivers coach Jay Norvell has plenty of intriguing options from which to choose, including rangy Dorian Leonard, speedy Armanti Foreman and newcomer John Burt.

TIGHT ENDS: None of the team’s four scholarship tight ends has caught a pass in college, and only sophomore Andrew Beck has appeared in a game. So don’t expect eye-popping statistics from this position. Beck, who started off last season at linebacker, had three catches for 13 yards in the spring game and has the ability to split the seams of the defense and get downfield. Additional options include freshman DeAndre McNeal, who has the versatility to line up in various spots, and Blake Whitely, the nation’s top-ranked junior college tight end in 2013. Garrett Gray has moved over from receiver and Alex De La Torre from fullback.

OFFENSIVE LINE: Apart from quarterback, the development of the line will be the most integral factor of the season. Five recruits were brought in to bolster a dysfunctional unit, and unexpectedly, two freshmen — tackle Connor Williams and guard Patrick Vahe — were getting the nod in early practices over junior college imports Tristan Nickelson and Brandon Hodges. Williams will probably start at right tackle, which was vacated by transfers Camrhon Hughes and Darius James. Taylor Doyle is back at center, and is flanked on both sides by a returning starter (left guard Sedrick Flowers and right guard Kent Perkins). At left tackle, Marcus Hutchins brings back 12 starts.

DEFENSIVE LINE: This could be the team’s best unit, especially if nose tackle Tank Jackson makes a full recovery from the foot injury he suffered against UCLA. Jackson and Hassan Ridgeway (six sacks in 2014) give Texas a stout middle, even with the loss of first-round NFL draft pick Malcom Brown. Poona Ford and Paul Boyette will be in the rotation. Ends Shiro Davis, Caleb Bluiett, Bryce Cottrell and Naashon Hughes have played in 87 games between them but will need to up their games (8.5 sacks combined). Freshmen Derick Roberson and Charles Omenihu could work into the mix as well.

LINEBACKERS: A whopping five freshmen were brought in, so that should tell you all you need to know about the internal belief in the veterans. Seniors Peter Jinkens and Dalton Santos are down to their final chance, while newcomers Malik Jefferson, Anthony Wheeler and Breckyn Hager enter with a clean slate. Jefferson, who was the nation’s top outside linebacker prospect, has moved to the inside, where the 23 pounds he’s gained since enrolling in January should come in handy.

CORNERBACKS: Without a true competition at quarterback, the preseason’s best battle was at the cornerback spot opposite Duke Thomas, the team’s only preseason All-Big 12 selection. Sheroid Evans was ticketed for the spot but hurt his knee in the spring and has not been seen again. Left to sort out the dilemma are Bryson Echols and Antwuan Davis, who have combined for one start and zero interceptions. The winner might just be keeping the seat warm for a freshman, be it Kris Boyd, Holton Hill or Davante Davis. At nickel cornerback, redshirt freshman John Bonney looks like the guy who will replace Quandre Diggs.

SAFETIES: A year ago at this time, Dylan Haines was a little-known walk-on from Lago Vista. He’s now the team’s most reliable safety, a 12-game starter in 2014 with four interceptions. Haines, a junior, has switched his jersey to No. 14 from No. 44, believing it looks smoother and will make him faster. At the other safety, Jason Hall is getting little love despite a solid freshman campaign. His coaches say Hall is a one-hit wonder; he didn’t show much in the seven games after his thunderous tackle of Oklahoma running back Samaje Perine. Hall’s job appears to be safe, because there simply are not many desirable options. Freshman DeSean Elliott hurt a toe early in camp and missed significant time.

KICKER: This summer, Nick Rose made an 80-yard field goal that he videotaped and posted online. He won’t get a real chance at that distance, but folks will be happy if he’s consistent from 40 yards and in. Rose had his critics in 2014, but he did make 11 of 14 tries over the final eight games.

PUNTER: The Longhorns will be looking for more consistency than Will Russ and Michael Davidson gave them last year. Australian Michael Dickson didn’t exactly endear himself in his first practice when he delivered an errant kick from the practice field onto Red River Street. Dickson looked shaky, which his defenders say was because he’s not yet comfortable in his American surroundings. Given that the coaching staff has invested a scholarship in him, Dickson probably gets the nod over walk-on Mitchell Becker.

RETURNERS: Daje Johnson will get a look at punt returner, but Charlie Strong prioritizes ball security at that position, and Johnson fumbled in the spring game. He’ll be on a short leash. Johnson could also be the guy at kick returner, a unit Texas never figured out last year, averaging less than 20 yards per return. Freshman Ryan Newsome, a track star at Aledo, also could factor into the return game.