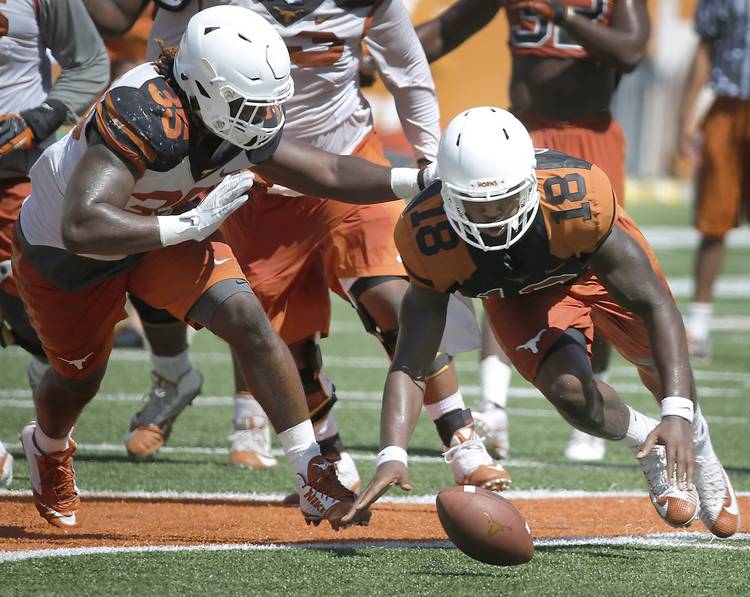 Texas quarterback Tyrone Swoopes (18) fumbles the ball on a running play during an early August practice. He was able to recover it, but inconsistent play at the position hurt the Longhorns in 2014.

TEXAS: KEYS TO THE SEASON

1. Establish some kind of quarterback consistency.

The Texas football program will wander in the darkness until this riddle is solved. In many respects, it doesn’t matter who excels, either. Tyrone Swoopes, Jerrod Heard, Kai Locksley or Matthew Merrick — someone, anyone — must step forward and prove himself capable of consistent play. Coaches hate going into games feeling as if they don’t know how the team will perform. One can only imagine how Charlie Strong felt last year waking up on game day and not knowing which Swoopes would show up. Swoopes, as the veteran, gets the first shot this year. But if he proves to be the same turnover-prone, odd-decision maker we saw against TCU and Arkansas, get someone else in there. Quick.

2. The offensive line must toughen up.

The quarterback situation won’t get fixed unless the offensive line shows resiliency and toughness. It says something about the state of this unit when freshmen Connor Williams and Patrick Vahe turned heads during August camp for their toughness. Williams wasn’t afraid to trade punches with teammates. Shawn Watson dubbed Vahe a “cage fighter.” Those two bring a tough-guy mentality the unit didn’t have last year. Taylor Doyle, Sedrick Flowers, Kent Perkins and Marcus Hutchins have experience. Those veterans talked a great game this summer. It’s time for action.

For whatever reason, it’s been glossed over how the defense lost six key players from last year’s unit. Everyone is hyped about Malik Jefferson’s debut. But this defense could have real problems. The defensive line is thin, and the best linebackers might be freshmen. Now add a cornerback who struggled at times last season (Duke Thomas), a safety who could be a one-hit wonder (Jason Hall), a nickel back who has never played before (John Bonney) and multiple freshmen. Strong and Vance Bedford aren’t magicians. Just remember that if things go haywire early.

4. Don’t be afraid to go light someone up.

What’s the best thing that could happen in the first half against Notre Dame? Somebody plants a big, violent hit on quarterback Malik Zaire. Or perhaps a bone-jarring hit on receiver Will Fuller. Nobody is advocating dirty play, by any means. But big hits build confidence, something this team needs. These Longhorns need to believe they can compete with anyone in the country. Looking at all the freshmen who should play, it’s understandable if they have doubts. They have no choice but to go all out against Notre Dame, Rice and California. The faster this team gains confidence, the better off it’ll be in the long run.

A guided tour of Texas’ roster, position by position