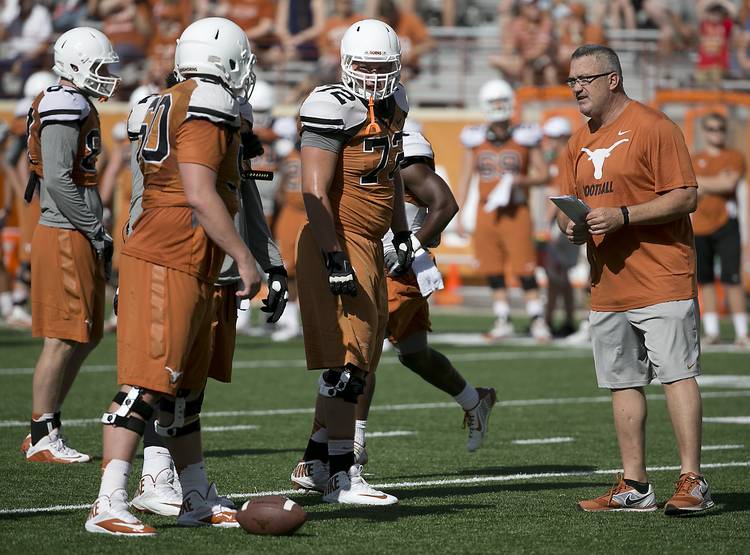 Joe Wickline stood in silence during the final moments of last season’s opener against North Texas, dismayed by the shaky effort put forth by the Texas offensive line.

No one dared approach Wickline, the surly new line coach of the Longhorns, but had anyone mustered up the courage, he probably would’ve spit out a few choice words before wondering how his porous unit could possibly compete against, say, Oklahoma or Baylor if it couldn’t overpower a defensive front from Conference USA.

The image of Wickline, dejected in a 38-7 win, was a harbinger for the 2014 season, when his unit got abused by fans, the media and, more often than not, Big 12 defenses.

Yet just about everyone expects Wickline’s unit to be better in 2015, perhaps even significantly better, due to an influx of talent and a switch to the spread, which some believe will accentuate the strengths of the line’s four returning starters.

Though a small sample — three training camp practices observed by the media — the line has exhibited an attitude not seen a year ago, when it failed to produce a 100-yard rushing effort until the ninth game. Freshman Connor Williams, who is slated to start at right tackle, has engaged in multiple post-whistle tussles with defenders. After the offense got the upper hand in a recent 11-on-11 drill, cornerback Duke Thomas stormed to the sideline and emphatically implored his defensive teammates to stop the run.

According to left tackle Marcus Hutchins, the attitude makeover took form during a chat this summer among the line’s three seniors — Hutchins, left guard Sedrick Flowers and center Taylor Doyle.

“We said we have to be a different unit,” Hutchins said. “It starts with us. If we want to go out there and win every game, it starts up front.”

In the spring, Hutchins had everyone in the media cackling when he said Wickline had complimented the line’s improvement but with the qualifier, ‘Y’all still suck.”

Things actually turned worse for Wickline after the North Texas game when the school announced that Dominic Espinosa, a fixture at center, would miss the remainder of the season with a broken ankle. Soon after that, Texas would dismiss left tackle Kennedy Estelle for a violation of team rules.

Right tackle Desmond Harrison, who former Longhorns coach Mack Brown predicted would be an All-American, ran into disciplinary problems and never played a snap in 2014.

Eventually, everything settled down. After weeks of deliberation, Wickline picked a center (Doyle over Jake Raulerson) and got more comfortable with Flowers and Hutchins on the left side. In November, progress was seen when Texas put up 34, 33 and 28 points in consecutive games against Texas Tech, West Virginia and Oklahoma State.

“We got better as the year went on,” said Wickline, who would be able to say that with even more conviction had the Horns gained more than 59 yards in the Texas Bowl loss to Arkansas.

There’s more work to be done, but Wickline seems to be encouraged by what he’s seen.

“He’s normally a tough guy, walking around with a mean face,” Flowers said. “He’s actually lightened up a little bit and has a smile.”

A burnt-orange youth moment? Texas could go all-in with freshmen