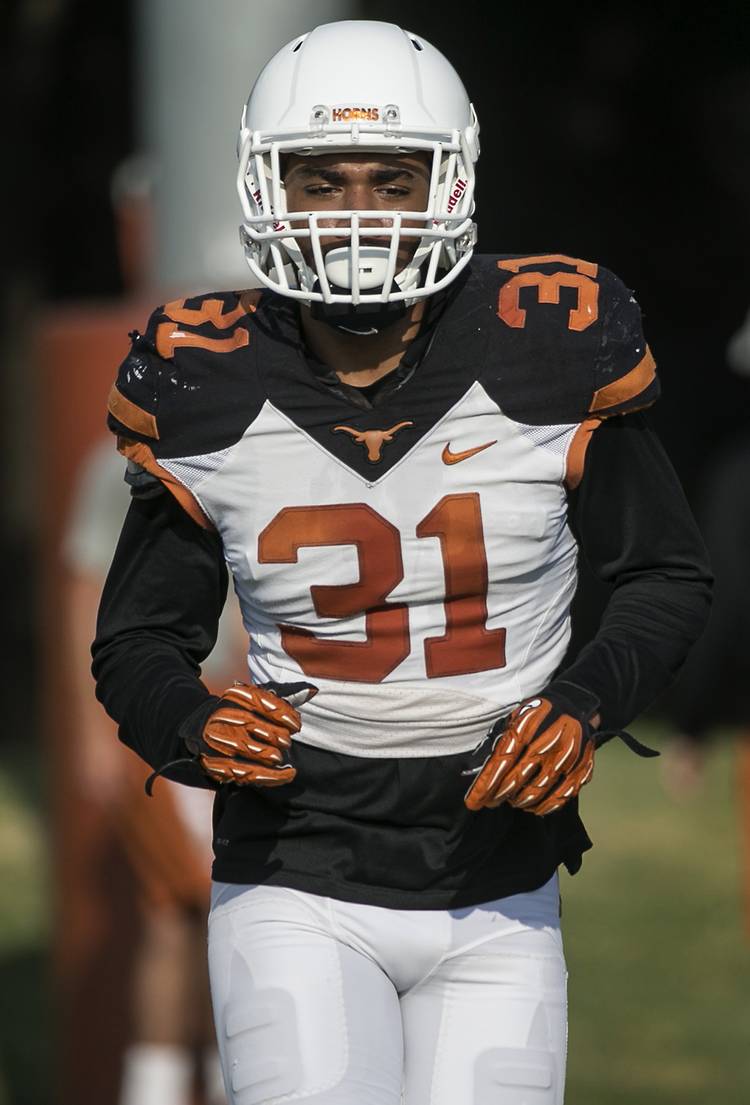 Heading into his second season, safety Jason Hall is the Texas football team’s equivalent to the folks who recorded the Macarena. Or “Ice, Ice, Baby.” Or “Who Let the Dogs Out?”

Which is to say he’s something of a one-hit wonder.

Like those ubiquitous jams from yesteryear, Hall’s vicious spear last season of Oklahoma’s Samaje Perine stands alone in his collection of greatest hits.

“You said it, not me,” defensive coordinator Vance Bedford said when asked this spring whether Hall is a one-hit wonder.

For now, the label is premature. Hall is still a neophyte entering his first season as full-time starter at safety. He and former walk-on Dylan Haines appear to be miles ahead of their competition in the locker room, which consists of journeymen juniors Adrian Colbert and Kevin Vaccaro, and freshmen P.J. Locke and DeShon Elliott.

Last year at Kansas, Hall became the first true freshman safety to start a game for Texas since Blake Gideon in 2008. His quick ascent caught observers by surprise — Hall, from South Grand Prairie, was among Texas’ lowest-rated recruits from the 2014 signing class and was thought to be a developmental project. But he ended up starting seven games and played in five others. Hall’s 49 tackles rank third behind Haines and cornerback Duke Thomas among the team’s returning players.

“He was a starter, so he should do really well,” coach Charlie Strong said. “You expect improvement from his first year to his second year.”

To make that leap, Hall recognized he must sharpen his coverage skills and take on a more pronounced role in the secondary, which lost NFL draft picks Mykkele Thompson and Quandre Diggs. Last year, Hall had only two pass breakups and no interceptions. No one denies he has a ways to go in defending the pass.

Back to Bedford’s critique of Hall. It didn’t end with the one-hit wonder crack. Bedford also likened Hall to a flash flood warning “that never happens.” Tough observation, but then again, Bedford wouldn’t have wasted the line on someone  he didn’t believe in.

Haines praised Hall’s ability to stuff the run, but suggested “he has to work on getting in the playbook and getting smarter with all of the coverages we’ve put in.”

Against OU, Hall showed he can be the enforcer that Bedford and Strong want at the back end of their defense. Perine, the recipient of Hall’s hit, is hardly a pushover. In 2014, the Hendrickson graduate was the Big 12 freshman of the year after rumbling for 1,713 yards and 21 touchdowns. Hall met him in the hole and lifted Perine by his legs and drove him to the ground. Nearby, Diggs started dancing.

If it was wrestling, Hall would have been awarded a two-point takedown.

Hall was surprised by the attention the hit elicited.

“When I first made that tackle, I didn’t think it looked the way it looked on camera,” he said.

He’s hoping it won’t be his last big hit.

All eyes on Johnathan Gray